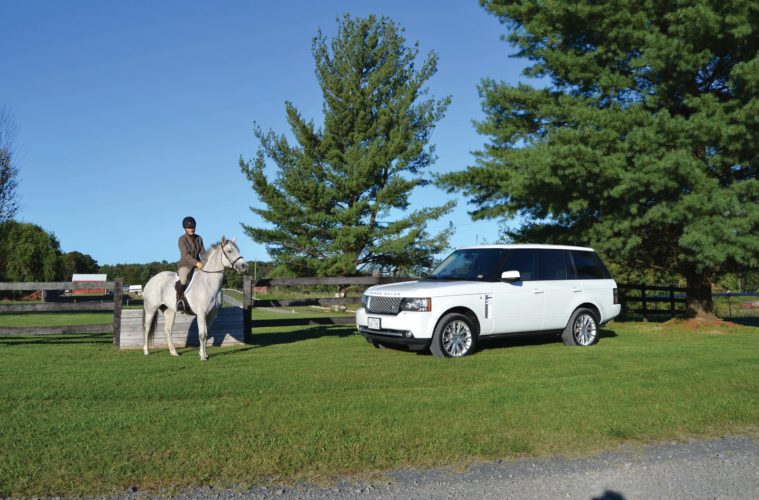 From the earliest days of production, Land Rover presented itself as the perfect vehicle for the farm or estate – “The World’s Most Versatile Vehicle.” The company saw to it that it had a presence at every major agricultural show in England, Scotland, and Wales, and promoted Land Rovers heavily in rural publications such as Country Life. Those 80” wheelbase Series Is could not carry very much, but they could pull a wagon of most anything that far exceeded the vehicle’s weight – and they did, across most any terrain. The equestrian world took notice and, to this day, Land Rover reinforces its connection with the requirements of breeders, trainers, estate owners, horse farms, and competitors.

Jeff and Anne Morrison, Mt. Jackson, VA, along with their “All American mutt, Ernie” a herd of horses and a fleet of Land Rovers, live this connection on their Three Socks Farm.

Jeff Morrison was born and raised 13 miles away in Woodstock, VA. “I’m the tie to the area,” he said, “as my family owned the local Chrysler dealership. That business grew out of my great-grandfather’s Woodstock Garage, founded in 1926. That’s how I got into automobiles. Anne and I met at James Madison University and got married in 2011. I graduated with a major in Business Management and worked at the family dealership until its sale in 2019. The proceeds of the sale enabled us to buy our farm.”

Although born and raised as a “Chrysler guy,” Jeff wanted to move Anne “away from an old Jeep. After all, a Jeep cannot compete with a Range Rover.” He bought their first one, an ’04 L322, from a city owner north of Mt. Jackson. “The owner believed that the engine needed replacement after a blown head gasket. He had already replaced the radiator and water pump and had lost interest in potentially spending more. But he didn’t want to junk it or hose someone on a sale, so he was very honest about its condition. In the end, it turned out to have only a leaking coolant temperature sensor.”

“We’re not in a wealthy part of the state,” noted Jeff. “Initially, I worried that there might be a negative response to the Range Rover, but that hasn’t been the case at all. Neighbors and clients are really interested in it, as it’s a rare vehicle around here.”

When it came time to look for its successor, “We shopped for months to find the right one. We bought an ’11 Autobiography sight-unseen from Land Rover Denver through an auction. It had been a California car most of its life before being moved to Colorado. There did not appear to be anybody or interior issues.” Yet buying anything sight-unseen can be a risk, and Jeff “had a moment” when the Rover first appeared.

“When it arrived in Virginia, it barely drove off the rollback truck! It was smoking and running something awful. Happily, the issue was a stuck-open fuel injector. It’s a sublime experience to drive it, off-road or on road. In my opinion, there’s nothing like a Range Rover on the road today. Anyone who rides in it understands why we have it. It has aged very well, and even after 10 years, it hangs in there really well. It’s beautiful from every angle. The design execution is very good, and the air suspension is fantastic – it makes the Range Rover as comfortable in the bog as it would be on Fifth Avenue.”

Anne calls it “the little black dress of vehicles!”

Jeff mused, “We loved the Range Rover experience so much that we shopped around for 6–8 months to help my mother find the right Range Rover Sport L320. We were fortunate to find one owned and maintained by an enthusiast. She loves it so much she’s considering a new one.”

When you own and operate a farm, though, you want the genuine farm vehicle – a Series Land Rover. The Morrison fleet has recently grown to include a ’71 Series IIA Hardtop. Jeff noted “it’s been a Virginia Land Rover for its entire life” – it had previously been a work truck on a peach orchard farm. “It looked pretty nice to start with, but I could see it needed a frame. So I ordered a galvanized one from Rovers North, along with a hoop set, Exmoor canvas top, and tailgate to convert it to a soft top. I can’t wait to start on it!”

Anne laughs, “He’s into horsepower, I’m into horses.” She grew up on a sheep and cattle farm in Bedford, VA, “but we always had some horses. As a toddler, I was scared of them, but my mother made sure I got over that phobia early! I started taking formal lessons at age 10, riding English, and participating in fox hunts. By the time I turned 12, I started showing more and I was hooked.”

“My first pony in 1998 was a bay named Alvin. We competed together on a regional circuit, and after college at James Madison University [another History major! -ed] I retired him from competing and he became my first lesson pony. Alvin taught many, many kids how to ride. We would go over colors and markings – he had a blaze and three white socks. He lived to age 26 and died the February before we bought this farm in October 2018. The farm’s name is in honor of Alvin.

The entrepreneurial spark that inspired Jeff’s great-grandfather to take a chance on himself so long ago also lives on in the Morrisons’ new dream. Jeff recounted, “The sale of the dealership enabled us to buy our farm. For the love of my dear wife and my admiration for her business, I wanted us to buy the property.

“It had been for sale for quite a while,” Anne recounted in a phone interview. ”It’s right around the corner from the first farm where I taught professionally. The previous owner had focused on importing Friesian horses as his principal business, but their market had dried up in the ‘09 recession. What spurred the whole thing was the neighboring property becoming available, so we ended up buying both adjacent farms. Most of the 45 acres are pasturage with small sections of woods in which we’ve created riding trails.”

While having the right space is important, building relationships is even more so. Anne’s care and consideration for both horses and riders shine through in her approach to running the farm. “We changed the focus of our equestrian farm from maximizing the number of horses we could board to developing close relationships with the owners and their horses,” she recalls. “While most of our clients are local to Shenandoah Country, we do have clients from as far away as New Jersey.”

Naturally, fairness is an essential principle in the Morrisons’ relationship. If Jeff can own two Land Rovers, then Anne determined that she could own three horses: “One is for lessons and the others are personal. JR is a 17-year-old Thoroughbred gelding, Gemma, who fox hunts, is a 10-year-old Connemara/Quarter Horse mare and Tess, my lesson horse, is an 18-year-old Holsteiner mare.

It turns out, horsepower and horses go pretty well together. A Series IIA, a Range Rover, and an equestrian farm – just the life that Land Rover envisioned when it designed and engineered its first models. The spirit is alive and well at Three Socks Farm.