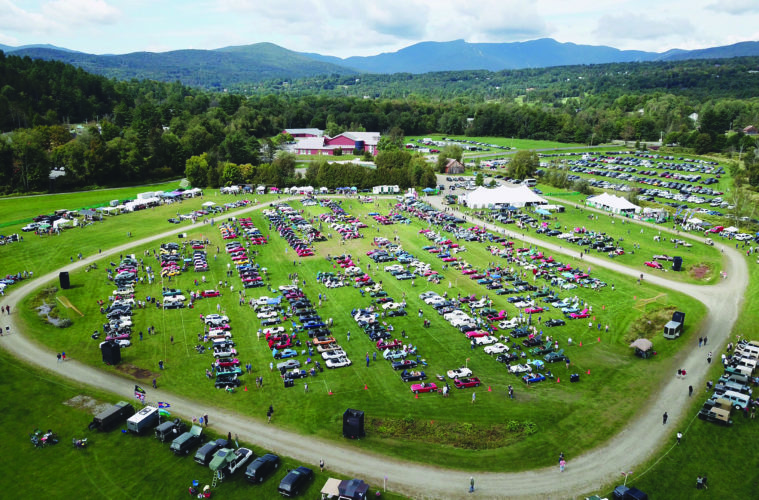 At every large wedding, there’s a table at the periphery populated by relatives the family believes it must invite but wishes it could have culled from the list. Seated far from the head table, those distant cousins can barely see the head table. As a Land Rover enthusiast, I know how they feel.

For 30 years, every September, the organizers of the British Invasion have welcomed every marque of British vehicle to fields in Stowe, VT. This year, anoraks had the opportunity to see rarities like a Gordon-Keeble and an Alvis at the center of the show field

Where were the Land Rovers? Once again, far, far away. But it didn’t matter – the few dozen Series Land Rovers, Defenders, Discoverys, Range Rover Classics, and an FC 101 entertained the nearly 1,000 attendees and drew outsized attention away from the highly-polished sports cars and saloons.

Over the decades, Land Rovers have provided much of the fun at the event. Rovers North once created an off-road demonstration course that piled hundreds of eager passengers into Defenders, Range Rovers, and – thanks to Tim Hussey – even a Camel Trophy Discovery, to show the off-road prowess of these vehicles. One year saw the course of a trial set up in full view of the show field. Another year, attendees watched a full match of Rover Polo, featuring teams of Series Land Rovers charging up and down the polo field in low range, whacking a beach ball with brooms towards a goal line.

Then came the infamous Marque vs. Marque tug of war. With testosterone and estrogen flowing, the Land Rover attendees found themselves matched against the (original) Mini enthusiasts. Given how teeny you have to be to fit into an Austin/Morris Mini, we boldly predicted victory – until we found ourselves yanked back across the starting line by delirious Mini owners. As we examined their lineup for WWE ringers, we found a Mini-Moke churning up the grounds at the full reverse throttle. A dozen of us lifted it in the air and carried it into the woods.

This year’s British Invasion had a more sedate atmosphere. For the Land Rover community, it meant we lined up by artificial designations: Series Land Rovers, Defenders, Military Land Rovers, and Range Rovers. Discoverys seemed to be left out in the cold, but that didn’t stop Rhonda and Gregg Betcher, Franklin, VT, from clearly having a great time with their ’04 Discovery II. “We purchased it when we lived aboard our boat in San Diego,” noted Gregg. “After our first outing in the Anza-Borrego Desert State Park, we knew we wanted to do more backroad and off-road exploration.” With an IKamper X-Cover rooftop tent, a Whynter fridge, a 13-gallon water tank, and a shower tent/portable toilet, they’re ready for overlanding. “We have a Rovers North Proline winch bumper in our garage, waiting for a 12,000 lb. Warn winch to arrive,” noted Gregg. The Discovery joins other Land Rovers (a Range Rover and an LR3) in the Betcher family fleet, but this Discovery II became the People’s Choice Winner for its class. Earl Moffat, ____, MA, has a long history as a customer of Rovers North. He drove up in his Range Rover P-38A, a model that sold very well for Land Rover but does not make many appearances at Land Rover events.

The few Defenders ran the gamut in terms of kit. At one extreme sat Steve Dick, Hyde Park, VT, and his ’94 NAS Defender 90 (# 1731), which he purchased new. For 23 years, Steve worked at Rovers North (to which he has recently returned); there his Defender gained a 300 Tdi engine to replace the original V8. The replacement motor now has about 270,000 miles on it. The Defender, now configured as a pickup, sports a personalized license plate (“D”) – only possible in a small-population state like Vermont.

Along with Steve, it was great to meet up with Rovers North’s Andy Lopez, Arthur Patsouris, Gene Schubert, Nick Cota, and Nate Brooks. It’s always enjoyable to connect faces with the voices I hear on the phone.

David and Elaine Russ, Lyme, NH, sat at the other extreme in “Gadget,” their ’97 Defender 90 with a Cummins 2.8 diesel (its 4th engine swap), tuned for 168 hp, and a TREMEC 4050 transmission (its 5th) to handle the 310 ft-lbs of torque. Inside, “Gadget” contains just about every bit of kit possible for a 92.5-inch wheelbase, from lockers and dual batteries to a Wilwood rally e-brake and a custom interior. David and Elaine also participated in the “Tailgate Competition” the following day, featuring refreshing fluids for people and machines. Rovers Magazine’s Dave Sweetapple, Brattleboro, VT, drove up in his trusty Defender 130 pickup, which drew much praise for its “working Rover” appearance. Noel Bishop, Fletcher, VT, shared the sounds of his ’86 RHD diesel Land Rover 110 Commercial with the appreciative crowd.

Gary Daniels, Allentown, PA, showed off a lovely ’50 Series I that had enjoyed 30 years under the same ownership in the UK. He had found it through Williams Classics in Conwy, North Wales, and thoroughly enjoyed sharing it with an admiring audience of British car buffs. Dan Foley, Fairfax, VT, brought his Bronze Green ’58 Series I that has delighted British Invasion attendees over many years. Parked near “Rickman,” my, ahem, patina 109”, the contrast in condition could not have been sharper.

Stuart Crisp, Plattsburgh, NY, shared his rare bird, a ’66 Series IIA Military FFR [Fitted for Radio]. The racks of receivers and similar gear reflected how far communication has come in 50+ years. “I’m missing only a couple of transmitter items,” noted Stuart: “they can’t be imported completed into the US as they share frequencies reserved here for some National Guard units.” (I’m pretty confident he’ll find a way.)

A most interesting Series IIA was driven from Stoneham, ME, by Derek Downes. His ’71 109” was assembled in Costa Rica. As it has a Dormobile top and unique seats – it may have left the Costa Rica CKD assembly plant kitted out as a camper! Derek, who has owned it for 6 years, found it in Costa Rica with a cracked block on the 2.25 diesel; it had been left outdoors with no coolant in cold-enough weather. He had a 200 Tdi installed and has driven it from Maine to Key West twice since purchasing it. As Derek is a homesteader, he has the perfect vehicle for his chosen life.

In sharp contrast to the lovingly restored sportscars and saloons, each with a pre-printed placard that read “Please Do Not Touch,” the Land Rover enthusiasts opened their vehicles for exploration – literally, in the case of Chris Velardi and “Kraken,” his ’75 FC 101 that won its class in the People’s Choice competition. Mike Capozza, Portland, ME, and Pat Thibodeau, Leeds, ME, both demonstrated that DIY enthusiasts can produce majestic examples of Series IIAs yet remain generous in their willingness to share their vehicles with admiring attendees. Fans of modified Land Rovers owe thanks to Paul Memont, Methuen, MA, who drove up in his Range Rover-powered, much modified Series Land Rover. Paul created the Land Rover Hybrid & Modified Facebook group, which has now grown to 16,000 members worldwide.

My weekend with Rickman provided many surprises. First, it made the 230-mile trip without incident (although it took an additional hour above Google’s estimated drive time). Then, when I returned from getting my registration packet, I found that someone had carefully unrolled a shop towel in my front seat, found my pen atop the bulkhead, and wrote a love note to the 109”. Finally, it clearly garnered the sympathy vote as it won third (“third,” not “turd”) place in the People’s Choice class competition.

The return of the British Invasion joins the All-British Car Show in Portland, OR [which enjoyed a tremendous turnout of Land Rovers -ed] and British By the Sea gathering in Waterford, CT, in celebrating – as safely as possible – Land Rovers and their enthusiast owners. Let’s hope that this revival can continue into 2022.