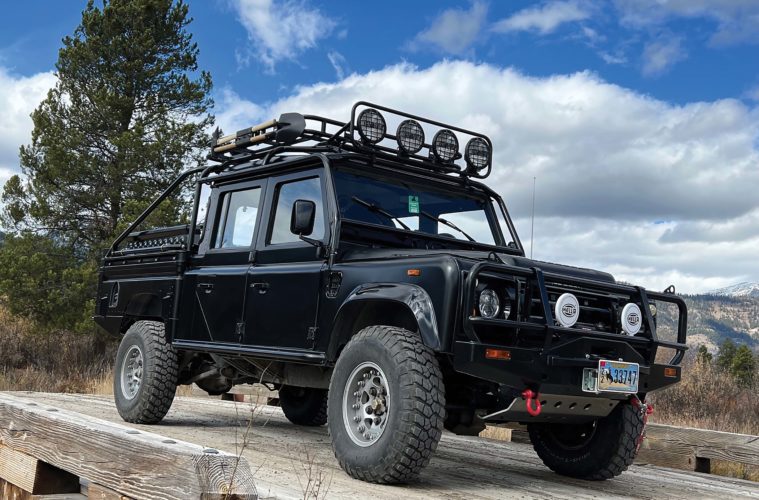 Bob Owens, Jackson Hole, WY, grew up in the “one-stoplight town” of Sonora, CA, and he thought that the “beautiful Sierra Mountains” would always be his home. Little did he know what path his life would take, or just how Land Rovers would help shape his life.

“As kids,” Bob recalled, “my Dad had two different International Scouts, a ’62 and a ’67. I can remember sitting in the back with a gas can for our small boat.” At age 15, Bob started working for a horse trainer, then as a gas jockey at a Chevron station. While attending California Polytechnic in San Luis Obispo, he managed a service station, which proved very helpful as his daily transportation was a Bugeye Sprite. “I once had three Bugeyes! Your mental capabilities are questionable at one; when you own three, there’s no question,” Bob said.

The move from Austin-Healey Sprites to Land Rovers came easily. “Between reading Hemingway or Born Free, the book or the movie, I knew of Land Rovers. In the early ‘90s, I found a ’60 Series II 88” Land Rover for sale, advertised by an Auto Trader in the Santa Cruz area, 150 miles from my home. It had no brakes and required a jump start, but I bought it. I rented a dolly and towed it home. Years later, my kids drove it to high school.

This opened the floodgates to a life with many different Land Rover models. “I bought different SWB and three or four LWB models, fixed them up, and sold them. I found a Discovery I in Mexico. I’ve had two Defender 110s and a NAS Defender 90 in Arles Blue, which I had converted to automatic; it now lives in the Hamptons.”

Sandy Owens, Bob’s wife, “is into Land Rovers big time. We call them ‘Sandy’s Landys.’” Hers have included the NAS Defenders as well as a current, supercharged Range Rover. Other family members and granddaughters have been equally captivated by the marque.

Eventually, corporate life with Sunoco moved Bob and his family to Philadelphia, where he served as CEO, but he never lost interest in finding the perfect Land Rover. At last, it appeared in Biloxi, MS – a non-running, 1988 RoW 130” with RHD. Bob flew south to look at it, then promptly rented a truck and towed it back home. It had a 3.5L V8 and a repaired bulkhead, with little corrosion on the chassis, but a bad fuel pump and a leaky gas tank. Bob called its RHD “too scary for today’s traffic.”

For the challenging task of this custom Land Rover, Bob turned to Eugene Smith, a skilled craftsman who has spent 40 years as a fabricator and custom car builder; Eugene now runs a small shop in the Philadelphia area. Together, they designed and engineered this special 130”. Bob admitted, “I’ve been working on cars long enough to know that I need to plan in advance and actually adhere to my plans. Then I get in the middle of the plans and violate all my rules.”

The 130” started out as an MoD rebuild, but Bob wanted more power, so first, he bought a 4.2 engine and transmission out of a Range Rover Classic. As he intended to use the 130 at his home in Wyoming, he decided he needed even more power, and finally settled on a crate GM LS engine combined with a 6-speed transmission. For cooling, Eugene installed a custom dual fan, four-core radiator.

Eugene could see that the original frame had a bend, so he ordered a new one from Rovers North, along with heavy-duty springs and shocks. First, he converted the 130” from RHD to LHD. He also swapped the rear drums for slotted discs and installed heavy-duty radius arms front and rear. Eugene’s fabricating skills allowed him to create mounts for a larger capacity fuel tank and a complete stainless steel exhaust system.

Outside the Defender, Eugene created a custom external cage and roof rack, fog and driving light mounts, a swing-out spare tire mount, and a front skid plate. He fabricated the front bumper and winch mount and, at the rear, created a custom trailer hitch, rear skid plate, and work lights.

Eugene described his shop as “a studio, as I mainly only do a few larger automotive projects a year. I mainly deal with fabrication; as a very small shop, I can concentrate on modification/customization that weighs down larger shops. I have built many different types of cars, from Series Rovers to complete custom Ford Broncos.

What is it that Bob Owens likes about his Defender? “I have to say, that’s the toughest question of our interview,” he said,” I ask myself that when things are frustrating me when working on them from underneath the vehicle. It’s the iconic look, the design from 1948 onwards to 2016. The new Defender doesn’t appeal to me as much. The new RR Supercharge my wife has is remarkable, but it’s not the same as the older Defender.”

Bob mused, “I drove 2,100 miles in the 130” after all the work Eugene completed in Philadelphia. It was a pleasure to drive. You don’t see many Defenders, and when I drive it, I always get a wave or a thumbs up. It’s sure not logic!”