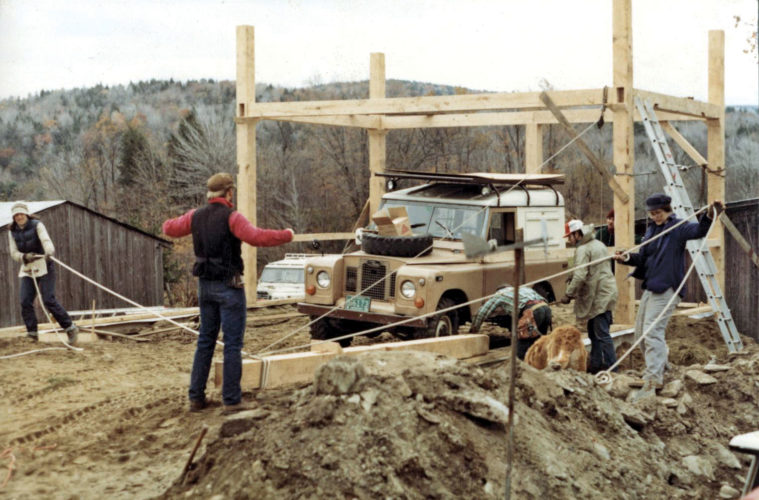 I grew up three miles from the Canadian border, the son of a mother who was a subject of the Commonwealth; thus began my love affair with English cars.

From my house, I saw daily-driver Austins crossing the border from Montreal, followed south by a parade of Aston Martins; the experience solidified my lust for British automobiles. When my older brother rolled into the driveway with a diamond-in-the-rough ‘56 Austin Healy 100 4M, I was hooked, and looking away was no longer an option. During high school, a stint with Triumph TR3s and TR4s introduced me to rust and corrosion – and their effect on these fine British vehicles.

A desire to move closer to the mountains led me to a small town in north-central Vermont and to the campus of Johnson State College. I reveled in the breathtaking views and enjoyed the happy people who also loved the great outdoors and skiing. The students brought with them a collection of rusted, well-seasoned vehicles to put on display amongst the more formal lawn art created before or after ski season. While accompanying a friend, a Filipina named Juliet, and her St. Bernard, named Ben, to the mechanic’s, the local authorities flagged her Volvo as “unsafe to drive” due to pervasive rust.

Alfa Romeos and discarded, dismantled VWs littered the campus. Sometimes engine wear signaled the end of a car’s journey, but most often, due to Vermont’s long winters and salted roads, rust had the final say.

Word soon spread across campus about a guy called Mark in Westford who had vehicles from England that did not rust because they were made from aluminum. At the time, I had a Toyota FJ40 in stage one of deterioration. When the FJ40 was left on Martha’s Vineyard after it had its beach pass revoked for… maybe driving where maybe it shouldn’t have been, Mark’s legendary aluminum cars became more of a necessity, and I began a pilgrimage to find the fledgling Rovers North.

Who was this magician named Mark Letorney? When I arrived at a barn in Westford, many ex-military imports stood in the driveway of this rural Vermont farm property. I spotted a guy with black curly hair, a big smile and a farmer’s tan. As I made my way around the beautiful post and beam barn, I spied a fleet Land Rovers. I was in heaven! I quickly discovered that Rovers North had become a Mecca for Johnson State College students with rusted-out vehicles. My friend Judy showed me a photo of a Series IIA 109” flipped on its side next to a boulder in Colorado with her John Denver-looking boyfriend beside it. As she showed me the 8×10 glossy I noticed no rot on the undercarriage of the vehicle. I can only describe it as a revelation – Mark and Rovers North had uncovered the perfect vehicle for me – I was hooked!

It took a while, but in the early ‘90s, I found a ‘64 Series IIA with a snowplow for sale in Cambridge VT. I sold the snowplow, removed the hardtop, and bought a khaki soft top and hoop set from Rovers North. I’d planned to store the Rover during the winter months, but when a girlfriend returned from Greece mid-winter and needed a vehicle, the hardtop went back on the Land Rover, and she drove it to work at the local newspaper every day for the rest of the season.

This same IIA ferried us to our wedding in Stowe, VT, as well as trucking many dogs to and from the Stowe River for swimming and doggie exercising. Throughout the years, I would go to a pickup window at Rovers North to buy parts (which surprises many Land Rover friends in the west who think of Rovers North only as a parts distributor). The sight of green and white Genuine Parts boxes always excited me more than the struggle to remove the old parts and install the new ones.

My move west precipitated the sale of the beloved IIA, as I didn’t want to drive it 2,500 miles across the country. Fast forward 20 years – I am now divorced and live on a 22-acre homestead in Montana situated on a long, winding dirt road whose conditions change with the seasons. To navigate the summer washboard roads and the winter snowdrifts, I needed a versatile, solid vehicle: obviously, another Land Rover. I did a lot of shopping over six months and found many Santanas, but not so many North American Series. I wanted an IIA and finally found one that had lived in Oregon, made its way to Seattle and wound up with a guy named Boris in New Jersey.

I purchased the vehicle sight unseen (not recommended). With many parts from Rovers North and a rebuilt head from Sean Jones at Blue Ridge Rovers in Asheville, NC, I began my next Land Rover journey of putting it together and making it into a modern-day driver. In the construction industry, where I work, we’re taught to “only expect what you inspect.” With the head removed, I thought I might as well rebuild the 2.25 petrol engine. I tossed out the sacrificial New Jersey rings and replaced them with STD rings honed the cylinder walls now guided by new STD pistons. I replaced the connecting rod bearings, changed the tappet guides, and cleaned the burrs off the cam.

I bolted down the new, refurbished head and installed a new Rovers North exhaust manifold. My property sits at an altitude of 5,500 feet, so I used a Rovers North conversion kit to re-jet the Weber carburetor. After using the hand crank to build up oil pressure, I adjusted the valves and installed a new set of plugs. I also took the time to rectify the errors made by previous mechanics. The float in the gas tank had been installed backward, so it hit the side of the tank – no wonder it always read “empty.” The spring on the yellow, 4-wheel drive high range knob was also incorrect, such that the Rover would not come out of the 4-wheel drive. With these fixes completed and a fresh Optima Yellow Top battery with a safety switch installed, the Rover was ready to go.

When I started up the rebuilt engine, it erased 40 years of my life. It ran as smoothly as when it had left the assembly line. I then moved on to stronger leaf springs and rock sliders. My Austin Healy-owning brother drove it on some not-so-conventional roads and described it as having the torque of a bulldozer with the movement of a Swiss watch. A lot of phone calls to the techs at Rovers North and a lot of two-day parcel deliveries went into this rebuild.

I now have a Montana license plate that reads “DAKTARI,” honoring the 1960s television show of the same name whose protagonist drove an IIA. It has gathered attention locally, most recently from an Englishman whose father was a machinist for Land Rover in the UK. I belong to a Land Rover Club: Montana Rovers. This club has at least a few series Rovers that all have Rovers North parts and boxes in the back of them at the gatherings. Rovers North has kept a lot of these vehicles running and local clubs help keep Land Rover enthusiasts together.