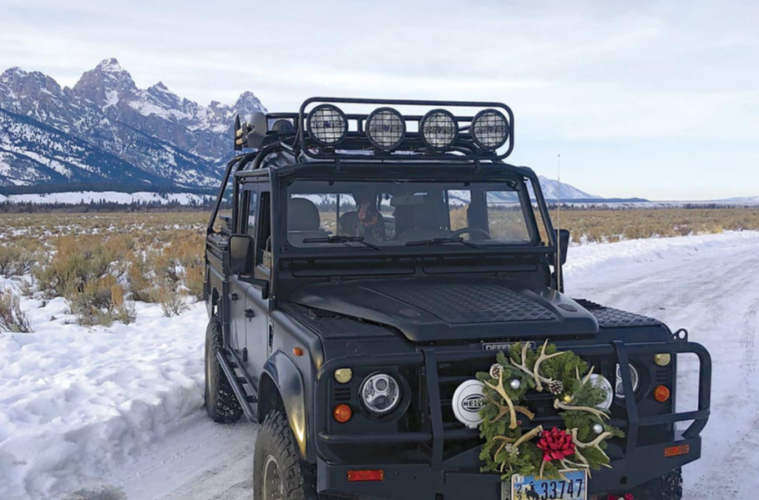 For 566 competitors from 35 nations, the Camel Trophy spanned 24 countries, thrilling millions of observers during its 20-year run from 1980–2000. Land Rovers ran in 17 of the “Legend

of Adventure” events, which solidified the image of the company far beyond its sales numbers.

For Nick Dimbleby, a Northamptonshire Range Rover Classic enthusiast, the competition forged a lifetime professional connection with Land Rover. The brilliant photographer and author has just published Camel Trophy: The Definitive History — a tribute that should appeal to every enthusiast.

experiences for competitors, who ranged from mechanics to accountants, physicians to engineers – professional race drivers were prohibited. For millions of enthusiasts, the Camel Trophy events represent the very essence of the Land Rover life.

Nick Dimbleby grew up in the 1980s transfixed by the Camel Trophy. “I could not get enough of the

shots of Sandglow Land Rovers in the jungle, wading through rivers up to their windshields… I wanted to be that photographer: chest-deep in water, camera in hand, photographing the Camel Trophy drivers through the open passenger window.”

That wish came true between 1996–2000 when Nick worked as a member of the photographic team chronicling the rugged terrain of Borneo, Mongolia, Tierra del Fuego, Samoa and Tonga. His skills, artistry,  gregarious nature and considerable talent have made him the go-to photographer for Land Rover, and his spectacular photos have graced the pages of Rovers Magazine.

The storied event remains etched in the minds of US team participants. Daphne Green, the first US female competitor, remembers “30 hours straight of special tasks, insects, rain, mud, scorpions and a broken ankle,” but “26 years later, Camel Trophy remains very much alive in the friendships I’ve made.”

Land Rover’s engineering made feats like the Camel Trophy possible; its engineering now looks forward to new adventures through the development of hydrogen fuel cell electric vehicles (FCEV), with a current focus on the Defender. FCEVs, which generate electricity from hydrogen to power an electric motor, should augment battery electric vehicles (BEVs) in reaching the JLR goal of zero emission vehicles by 2036. The big advantages in hydrogen-powered FCEVs rest with their high energy density, rapid refueling and minimal loss of range in extreme temperatures. This technology would enable larger, long-range vehicles to operate effectively in very hot or very cold environments – the kinds of places where Defenders get called upon to work.