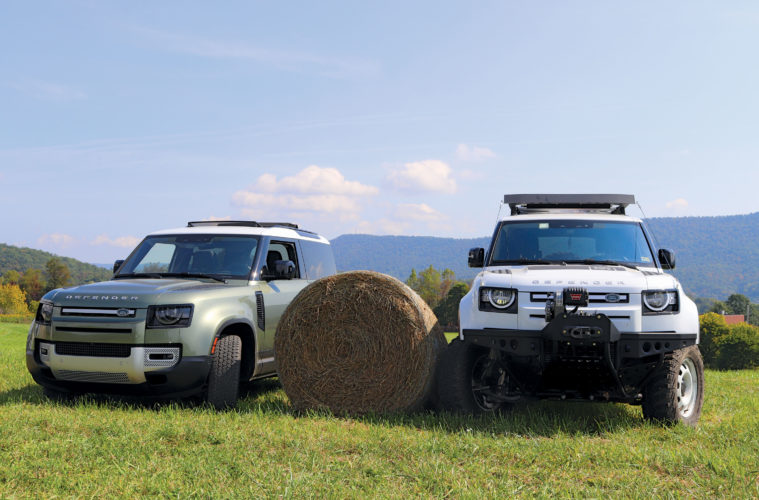 inventory and reduced rental car fleets, I had shamelessly begged Jaguar Land Rover for the use of a press vehicle to drive to the Mid-Atlantic Rally [see p. 38 in this issue]. To my delight, I came away with a Defender 90 First Edition – provided I would pick it up at their headquarters in New Jersey.

While a heritage Defender confronts significant challenges as a daily driver today, the new Defender 90 (actually 101.9 inches) successfully addresses contemporary driving. My First Edition came with the Ingenium inline 6-cylinder (I6 MHEV), with 396 hp @5,000 rpm, and 406 lb-ft of torque at only 2,000 rpm. The 8-speed automatic transmission shifted smoothly and imperturbably in Drive, and with vigor in Sport mode – aided by its electronic supercharger. I also appreciated achieving 23 mpg at 70–80 mph highway speeds. Braking via 4-wheel discs on the standard 19” wheels, enhanced by autonomous braking capabilities, built additional confidence. These assets demonstrated their importance during my 8-hour drive south to Pembroke, VA.

I-81 in Northwestern Virginia becomes very hilly but has only two lanes, both packed with trailer trucks inching ahead of one another. Their tonnage and the steep climbs tax their drivetrains, so I wasn’t surprised to see one double-trailer semi in the breakdown lane ahead of me. The line of trucks in the left lane meant I could not move over when the semi suddenly pulled into the right lane. I hit the brakes and in what seemed an instant – and without drama – the Defender slowed to an indicated 10 mph. As we progressed up the hill at 12 mph, I waited for a window of opportunity. Car after truck poured into the left lane for a while, but when I saw a small opening, I put the Defender into Sport mode and accelerated into traffic.

Land Rover claims 0–60 mph in 5.7 seconds – it felt faster. Throttle to the floor and the Defender’s front end lifted slightly as the supercharger kicked in; in seconds, I reached the appropriate and likely illegal speed. Let’s agree that no stock heritage Defender ever accelerated this quickly, or reached an rpm-limiter top speed of 119 mph. Acceleration is not an attribute of a stock heritage Defender, but in the new Defender, the experience proved so exhilarating that later, I took several MAR attendees out for demonstration rides on empty highways. (When I shared this experience with enthusiast John Kooistra, Windham, ME, he said, “The only time I’ve felt the front end of a classic Land Rover elevate like that is when it’s attached to a tow truck.”)

The new 90 will seat 5 [6 with the optional front jump seat] but as with any Defender, it helps if the occupants are close friends or family. The infinitely adjustable seats and steering wheel provide the right positions to see over the hood and even with the 60/40 rear seats and their headrests up, the minimal overhang enables you to sense the rear of the vehicle. The rearview mirror incorporates the rear camera in one setting, so you can see what’s behind you clearly. Impressively, the seats proved supportive and comfortable for an 8-hour drive – a statement you’re unlikely to hear from a heritage Defender enthusiast. The interior still features useful grab handles on the dash and above the doors. The instruments can be read easily and you can engage features through either touch buttons on the center console or via the center screen. It’s also very reassuring to find a robust gearshift lever rather than a gimmicky rotary knob.

On the other hand, Land Rover, since you designed and built the fabulous front seats, why would you give them a seat motor that last saw service in a Lionel electric train? To access the rear seats, you need to move the front seats forward. They do move, but at a glacial pace, sure to be unpopular when you’re standing outside in inclement weather, waiting for the seat to allow your passengers access to the rear.

While I’m whining, why don’t those rear seats fold flat instead of at a 15-degree angle? Even JLR staffers quietly agreed this deserves consideration for a change. Even with their funny angle, I admit that there’s plenty of gear storage space with the seats folded down. (Why not make the center jump seat standard as part of the base price if I choose to have no rear seat?)

Off-road, the new Defender proved as capable as you’d expect from a Land Rover. My loaner came without the low-positioned, recessed optional winch (bound to pick up crud when spooling blindly), but it would be unlikely to be needed for self-recovery. Selecting low range and engaging Sport mode, you could choose between eight speeds and several off-road modes, or just let the Terrain Response system select the right torque and speed settings for you. Momentum plays a smaller role with the new Defender; its drivetrain is very reluctant to allow for wheel slip in low-traction situations. The crawl speed in Sport Mode 1 rivals that of a snail. The First Edition uses the air suspension system; coil springs are standard on the base model. Ground clearance is 8.6 inches with coil springs, and 11.4 with the air suspension.

Transparency compels me to note that I did not subject the loaner to possible damage on narrow, tree-lined, and rocky trails; instead, it became the test vehicle for the Rovers North RTV Course at MAR. Its additional width and length did not cause any problems due to its suspension advances and tight turning circle. On the very wet, tall grass of MAR’s hillside camping location, I did not experience any wheel slippage, no matter how slowly or rapidly I ascended the steep sections.

Ralf Sarek, Richmond, VA, took his coil spring, base-level new Defender 90 through nearly every trail at MAR. When asked about his off-road experience, Ralf commented that “wherever I pointed it on the trails, it went. Only the most extreme ones could not be tackled by my Defender. Land Rover did a great job on the spring rates. When I took it out West, such as at Moab, where departure and approach angles are paramount, the air suspension would likely have offered some extra protection (through added clearance) as well as possibly more articulation at individual wheels.” [see Holiday 2021 issue -ed.]

If you use your Defender 90 for work and open/close the doors often, you can forgo your gym membership, as the heavy doors provide a fine workout – especially when on hills. Opening the driver’s door on the uphill of a side slope, or closing the passenger’s door on the downhill side, will bring out the Hellboy or Wonder Woman in you. The floors meet at the sill level and their rubberized surface means you really can hose out in the interior. Or – hypothetically of course – should you leave the lovely fabric sunroof open overnight in a rainstorm, you’ll find the water doesn’t harm the interior and can be mopped out. The difference is that the superb climate control system does help dry out the interior quickly so that, hypothetically, when you return the Defender, the evidence has evaporated away.

The new Defender 90 incorporates much of what enthusiasts love about the previous Defenders, updated for modern driving conditions and distances. If I lived and worked in a less rural setting, I would be quite pleased to own one. Whether it proves as durable and functional as the heritage Defenders will require time to render a judgment. Land Rover advertisements once claimed, “They last. And last. Despite the way they’ve treated, they’ve been known to the last ten-fifteen, even twenty years… Spare a few minutes to chat with the salesman. He’ll probably never see you again.”

Here’s hoping the new Defender will emulate its ancestor.

For more real-world experience with the Defender 90, I spoke with enthusiast Seth Velho, Stowe, VT, whose 2022 Defender 90 X Dynamic has accumulated 3,000 miles in three months. His previous Land Rovers include an ’04 Discovery II and an LR4. Seth said, “Mine has the inline 6-cylinder, which I find very smooth and responsive. There’s no body-roll and it handles beautifully. I feel like I’m in a mini-tank. I’m running Goodyear Duratrac tires on 20” wheels, and it’s been great in the snow.”

Seth agrees that the slow seat movement means it takes a while to get his 4-year-old daughter into her car seat. He also wishes that the front and rear bumper were more substantial and less “plasticky.” He said, “When I tried to avoid a car pulling out in front of me in a parking lot, I put a ding in the rear bumper covering, and I’m still waiting for the part. Overall, however, the 90 is my daily driver, and I’m very pleased.”