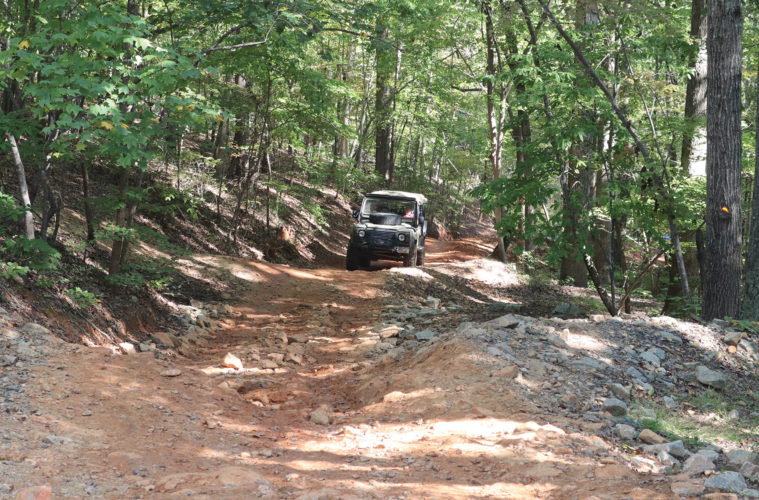 Early every January, Steven Ratajczyk, Cleveland, TN, wake up early to sit on hold with the US National Forest Service. He hopes to reserve the Badin Lake Campground for the annual Uwharrie Rover Expedition on behalf of the Old North State Land Rover Society. His efforts ensure that the well-maintained, comfortable campground [with showers and toilets, thank you] will hold the 100 Land Rovers attending the event. The 2021 URE! (Yes, there’s always an exclamation point), the 17th did not disappoint its hundreds of participants.

Thanks to pandemic regulations, I had not attended a URE! since 2019, so I looked forward to my return last October 15–17. I flew from Maine to Charlotte, NC, where I’d reserved a rental car to drive the 90 minutes east to the Uwharrie National Forest. Charlotte’s rental car terminal always has substantial wait lines, reminiscent of the bread lines during the Great Depression, and once again it tested your endurance. After the l-o-n-g wait, I discovered that having a confirmation number from the rental company’s website did not assure you of a vehicle. (I won’t identify the firm, but there’s a reason they once advertised, “We’re #2.”) I tried two other rental companies, but none had any vehicles available.

In desperation, I debated renting a U-Haul – but instead, I called Steven Ratajczyk for help. “Let me see what I can do,” he said. Within 15 minutes, I got a call from Jeffrey Rice, Fort Mill, SC, just across the state line from Charlotte. His route north would go right past the airport, so he would happily give me a ride to the event. In the early afternoon, Jeff arrived in his Ford Transit-based Vandoit, a compact yet very clever conversion van, along with his daughter Celtlyn and son Bram and their weekend supplies. Together, we headed out for the URE! in significant comfort.

The Uwharrie National Forest features numerous well-maintained trails specifically for off-roading. Some take you past equestrian paths, small farms, and lovely campsites. Others send you through ravines with steep ascents or descents, which can be quite challenging when wet. The US Forest Service maintains the trails but has left lots of difficult rock crossings and deep crevices untouched. While the club can control the campground space, the trails remain open for any vehicle. This can cause some backups as convoys of various trucks or SUVs to run in opposite directions, or as four-wheelers and side-by-sides compete for room on the trails. Southern graciousness rules, however, as one group or another always pull over to allow passage. Not a few of the dedicated off-road machine owners looked quite amazed at what the stock Land Rovers could accomplish on the most challenging routes.

Each morning, trail leaders line up at the El Dorado Outpost Store (food, fuel, clothing, tools, fishing, and hunting supplies) at the entrance to the Uwharrie. You’re asked to determine your off-road experience level (novice, intermediate, extreme). Twenty years as a Marine Sargent taught Dan Ratcliffe, Wake Forest, NC, how to make people fall into line and listen up to instructions at the driver’s meeting.

Steven Ratajczyk and Dan Ratcliffe called upon Corey Rice, Jay Bayer, Jon Slater, and Mark Hollahan to serve as the lead vehicles and cabooses and to join others in spotting on the difficult sections of the trails. Many of them also volunteered to help with all the behind-the-scenes work, joined by Cyndi Phillips and Rick and Tiffany Prudhomme.

The rolling hills, wide rivers, and beautiful lakes encompassing the Uwharrie region feature stunning vistas that come into view as the morning fog dissipates under the rising sun.

The Yadkin and PeeDee Rivers, along with accompanying lakes, shimmer in the morning sun. I had the good fortune to observe them through the windshield of Steven Ratajczyk’s loaner P38A. At 166,000 miles, it retained all the majesty of a Range Rover. The landscape also includes fields and trails for off-roading, attracting off-roaders of all stripes. From the newest Defender and Discovery 5s to the classic Series IIs and IIIs, the Land Rovers never failed to capture the attention of others on the trails, or the admiration of onlookers at the El Dorado Store.