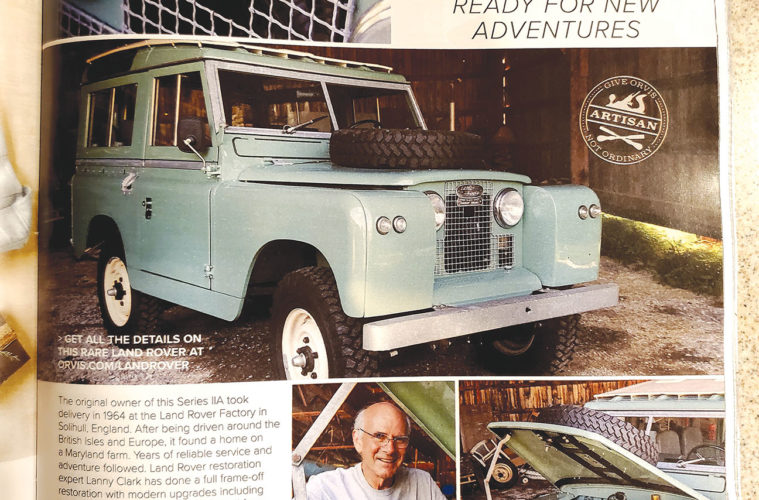 Much of the East Coast, from the South through New England, has finally dug out of a massive “snow bombogenesis” – just in time for the next one. As we write this, another storm will extend from New Mexico through Maine, dumping more ice and snow – perfect weather for my Land Rovers! To pass the time, Sighters from around the continent have kept themselves warm watching movies and videos, trolling social media, and reading magazines and catalogs. We thank everyone for their diligence in sharing their findings with us!

Rule #1 — All Sightings receive recognition and our appreciation, but not necessarily a mug.

We reward only those Sightings that capture the unique qualities of Land Rovers as well as their owners and display them in a distinctive way.

Rule #5 — Sightings that are Land Rover references in books go to our Literary Land Rover Editor for the mention, but only when space permits.

Rule #8 — Grudgingly, very grudgingly, the Editor admits he might have made an error. Let us know if you think you’ve been jobbed.

Robert Alley, Marietta, GA, watched an episode about the Yaupson Wellness Company on PBS’s StartUp and was delighted to see both a Defender and a Range Rover Classic – on PBS! Eric Brumwell, Bainbridge Island, WA, spotted the soft top Defender in the movie trailer for The Unbearable Weight of Massive Talent. PT Schram, Churubusco, IN, noted that Hagerty predicted Defenders would be one of 20 classic cars to increase in value.

James Hutchison, Cambridge, MA, enjoyed seeing so many photos of Land Rovers in the Wildlife Foundation’s publication. Jeremy Vimislik, Seattle, WA, does not want a mug for his Sighting but noted the Defender 110 on the screenshot of a phone cover ad on an Amazon web page. Robert and Jessica Jackson, Lewiston, MT, was pleased with the 80s Land Rover 110 with “Go Faster” striping on an Instagram post for Coleman camping gear. Bruce Cook, Edisto Island, SC, loved the sight of a topless Series III in the Marchbrae store in Edinburgh, Scotland. Morgan Aldrich, Winooski, VT, noted that Dometic promoted a fridge online using a European new Defender 110.

We’ve mentioned these Sightings in previous issues, but we do want to thank Sighters for sharing them again with us. Patrick Holder, Atlanta, GA, spotted the Defenders in the Vineyard Vines and Peter Millar catalogs, as did Brad Bokkean, Banner Elk, NC, Karen Sindar, Santa Rosa, CA, Frank Adcock, Memphis, TN, Jason Delgado, Westport, MA, Rick Sunderland, Golden, CO and Pat Harris, Vero Beach, FL. Will Wilson [see Rule #6] enjoyed seeing the Series Land Rover in the online ad for Dues ex Machina. Andrew Thompson, Stevens, PA, spotted the Land Rovers in the Boden catalog. Jonathan Greene, Pikeville, NC, and Adam Setliff, Flower Mound, TX, got a kick out of the rear of a Defender on the 511 Tactical website ad, touting its ability to help you “Survive a Visit to Your In-Laws.” Hannah Kerr, Moorland Hills, OH, enjoyed the Defender on the cover of the Vuori catalog. Tony Brooks, Leesburg, VA, and Andrew Thompson, Stevens, PA, we’re pleased to see the Series Rover in a desert scene on a Marriott hotel website. Louis Arredondo, Rocklin, CA, enjoyed the write-up on Lanny Clark’s superb restorations in the Orvis catalog. David Ducat [see Rule #6] pieced together a Sighting from the B pillar and window of a Defender in an older Lands End catalog. Ken Gummerson, Baltimore, MD, spotted the Defender in the Principal Insurance television commercial and the Series IIA in the Orvis promotion. Tyler Lucks, New Albany, OH, enjoyed seeing the Series IIA pickup [with Maine plates! -ed] in the Serena and Lily catalog. Bob Banghart, Douglas, AK, saw a Series II in the Sundance Almanac catalogue.