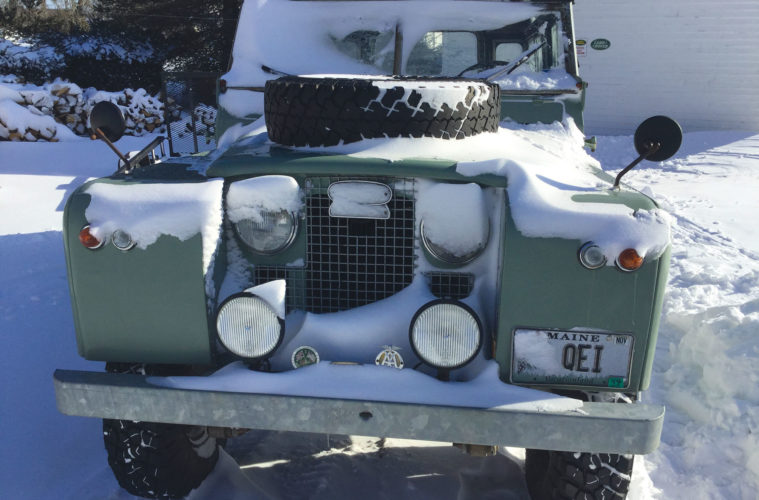 Behind the Steering Wheel – Winter 2022

The advent of the New Year provides the perfect opportunity to take stock and assess the wisdom of past decisions. Given my Land Rovers’ role in my life, I should start there.

November 2021 marked the 30th anniversary of my stewardship of the QE I, my ’66 Series IIA 88” Station Wagon. I had just become a freelance contract worker and knew that my then 9-year old Triumph Spitfire could not be relied upon when I absolutely, positively had to be somewhere. A Land Rover seemed the perfect solution. I paid one owner to let me drive his late IIA while accompanying me on a trip from Maine to Cape Cod to look at two candidates for purchase. The day-long round trip demonstrated that worn-out 2.25 L engines can use a lot of oil, that worn-out overdrives howl like unhappy malamutes and that worn-out drum brakes need adjustment to prevent swerving. After 320 miles, I felt exhausted and exhilarated at the same time.

A “Bugeye” IIA exceeded my limited budget (shame, as it was a beauty) and I turned down a Series III when a light tap with a screwdriver poked a hole through the center cross-member. During a later search, the QE I became available and I fell in love: faded Sage Green paint, tropical top, jump seats – and previous ownership by a well-known enthusiast (nicknamed “The Terminator”). With only 111,000 miles on it, what could go wrong?

I took the QE I on a vigorous drive across farm fields at a bracing 15 mph on that sunny, warm November day. It felt just right. I bought it and returned a week later with a legitimate registration. That rainy, chilly day taught me that I would become intimately familiar with the function of each fuse (there are 2) so that the wipers, defroster, and gauges might work. With the help of Rovers North, the QE I made an inept but enthusiastic mechanic out of myself.

Not only has the QE I served as my daily driver for work throughout the Northeastern states, but it has also pulled parade floats and landscaping equipment trailers, launched and retrieved boats, carried many cords of firewood, and transported up to 8 people at a time (don’t ask). It has appeared in catalog shoots for L.L. Bean, Nautica, and G.H. Bass. It now has 400,000 miles on its Rovers North rebuilt engine and two years on its Rovers North-sourced transmission. It’s been assaulted by foolishly courageous deer and a testosterone-driven horse and has been rebuilt each time. As I now own two other Land Rovers, it gets driven less – but with no less passion.

The more I met enthusiasts with Discoverys and Range Rover Classics, the more I realized that I had to experience one for myself. My quest for a usable Range Rover Classic came up as empty as my bank account, but in 2017, I found a ’97 Discovery I for sale in Maryland. There were two reasons the mother-daughter owners had decided to sell it; one was that it would not run. A local repair shop claimed they needed to drop the fuel tank to install a new fuel pump, and that it required a new starter. The shop’s estimate scared the owners, so they put it up for sale.

Clearly, I had not wised up at all since purchasing the QE I. Since it only “ran when parked,” I could not request any of the usual checks: engine compression and blow-by tests, transmission smoothness, electrical issues, etc. ROAV president David Short examined the Discovery and recommended that I continue my search. Ignoring his sage advice, I called Rovers North and learned how easy it was to replace the fuel pump; neither it nor the starter would be expensive repairs. I purchased the parts and ordered the repairs before I’d even seen the Discovery. A month later, I took the train to nearby Washington, DC, to close the deal. When the Previous Owner – usually someone who can’t wait to cry out, “S-C-O-R-E,” upon signing over the lemon to another sucker – wept gently, I knew she really adored the Discovery. After signing the papers, I drove it about 100 feet before the check engine light illuminated; that was a short honeymoon. I left for the ROAV Wintergreen event, took it off-roading, and then drove it 760 miles home.

“Gilroy” (named after Managing Director Tony Gilroy, who shepherded the creation of the Discovery) came to me with 119,000 miles and now has 140,000 miles. Since its purchase, it’s received the usual maintenance and fettling and a preventative head gasket replacement. The 4.0L engine seems to have most of the 182 hp, 233 ft-lbs of torque still on tap. It has required a new exhaust, radiator/oil cooler, window regulator, sunroof motor, and a used transfer case. It has stranded me only twice, once because of the transfer case failure, and once because the plastic radiator reservoir burst at the seams. By my standards, that’s “reliable.”

At 25 years old, Gilroy has provided yeoman duty as a highway traveler as well as a worker bee: towing boats, moving dead tractors – even a stuck septic tank truck. It’s taken me on work across New England and the Northeast, off-roading at the Maine Winter Romp, through winter blizzards and warm summer days. I still marvel at the visibility made possible by the high greenhouse and thin windshield and door pillars. With only a 100-inch wheelbase (overall length of 178 inches), it packs a lot of versatility and capability into those small dimensions.

At the time of its importation in 1994, Land Rover touted the Discovery as, “A Vehicle of the World,” “The definitive family sports utility vehicle,” and “The vehicle of choice in the Camel Trophy competitions.” First manufactured in 1989, the Discovery I would continue for 10 years until the arrival of the longer, much-massaged, and more powerful Discovery II in 1999. My Discovery’s ride, handling, and interior reflect its orientation toward “all-terrain functionality.” Each time I drive it, I’m reminded of Land Rover’s admonition when they published “The Authoritative Guide to Sport-Utility Vehicles.” Put simply, the Discovery is not for every sport-utility intender… Our vehicles are not pretenders.”

For decades, I’d lusted after a Series IIA 109”. I don’t know why. I’m single and live alone, and I doubt that I have 9 friends at all, let alone 9 who’d all need a ride at the same time. There’s something about the proportions of a 109”, the intensely purposeful nature of the vehicle, that has always appealed to me.

As David E. Davis once wrote in Car and Driver, “It is a car that every man feels compelled to buy at one time or another, but hardly anyone has any use for.” After a long, uncomfortable drive in the rear of one, Davis’ passenger exclaimed, “I’ve never been so miserable in my life. Wouldn’t it be a ball to own one of these things?” Davis cited this as “but one of several instances where perfectly reasonable people seemed to take leave of their senses upon first meeting a Land Rover. It is less of a car than a state of mind. Its owners are the most partisan group imaginable and its would-be owners are legion.”

I’ve chronicled my empathy for derelict vehicles [see Winter 2019–Winter 2020 issues -ed], which led me to purchase a ’67 109” SW from the Rickman family of Virginia, engage Sarek Autowerke in Glen Allen, VA, to lift it onto a ’76 RHD Series III frame and drivetrain, and then drive “Rickman” home to Maine.

Since its arrival on the island two years ago, it has earned its keep towing landscaping trailers and crews, but its most impressive feat came this past Fall when it carried 11 adults at once. Months before, I had committed Rickman to help transport a Colby College Environmental Studies class to visit our island’s three wind turbines. Of course, I promptly forgot about this commitment until the day of their visit, when a text reminded me of my promise. Whoops – now I remembered! I muttered apologies to Professor Alison Bates, dashed home to get the 109” and drove back to the ferry. Once the students saw Rickman, they all wanted in.

Mine is not a NADA 6-cylinder model; mine has the same 2.25 L, 77 hp (maybe) as my 88”. The road to our turbines features many twists, turns, and hills, most of which force downshifts with only 1–2 passengers; what would happen with 11 and their backpacks? Ian, Georgia, Maddie, Stacey-Ann, Jack, Molly, Eliza, Teddy, Hillary, Hank, and Ellie somehow stuffed themselves in and the 109” somehow transported them at the same pace as with 1–2 passengers. I beamed like a proud father!

Sports Car Illustrated tested a IIA 109” in 1961 and reported, “This is the only station wagon that we have ever seen that will really carry 10 adults…. The Rover boys build a lot of quality into their package. You won’t see many on Park Avenue or Wilshire Boulevard [an inaccurate prediction -ed], but in pith helmet or parka country, a Land Rover is the height of fashion” [an accurate prediction -ed].

I’m looking forward to the endless possibilities that my Land Rovers make possible, and hope for more decades of surprises and entertainment from them. From my Land Rovers to yours, Happy 2022!