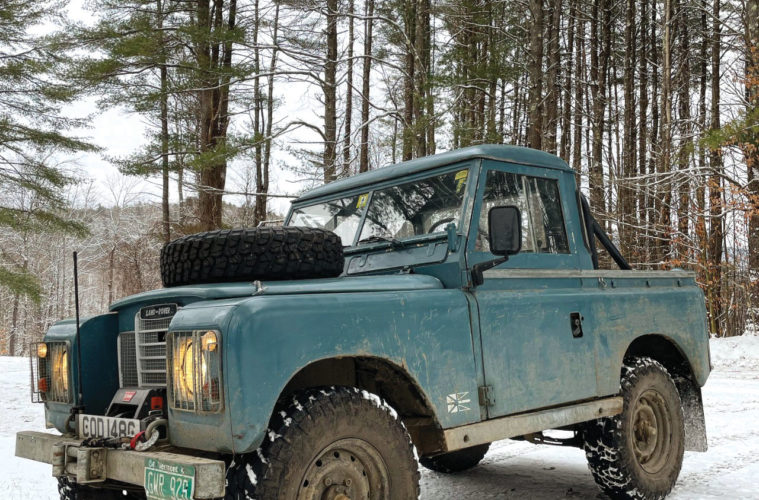 Speaking from experience, I can tell you that Land Rover ownership in New England comes with an appreciation of the Gregorian calendar. By the time October rolls around, I am already thinking of storage for my ‘95 Defender 130, and winterization prep for the Land Rovers

I will treat as sacrificial lambs. Like our local municipalities, I diligently keep an eye on weather forecasts as of early November. As soon as the first snow flies, the roads will be covered in a fresh layer of salt; they will remain coated in the corrosive mix throughout the entire winter. That news means that my garage will be full for several months. The stored 130 will not see pavement until mid to late April, and then, only after several heavy rainfalls to ensure that the saline has been washed away.

Owning a vintage Land Rover comes with various levels of anxiety. In the general, broader sense, this anxiety can mostly be attributed to the failure of parts causing the beloved Land Rover to sit in the driveway until the problem is diagnosed and fixed with (mostly) easily obtainable replacement parts. This condition seems universal, no matter where you live in

There is a second, elevated level of anxiety that many Land Rover owners will never experience if they do not live in areas with heavy snowfall. We call that rust.

No matter how innocuous a layer of saline seems in the present, it will ultimately degrade and destroy steel in the future. The slow decay of the steel frame and exposed metal parts of your Land Rover will definitely affect the vehicle’s value in a few short years. Whenever someone asks me if a Land Rover that they have seen for sale is worth the price, the first thing

I always ask is, “How is the chassis?” A new chassis will cost thousands and that doesn’t include the labor, whether your own or someone else’s. This is where the preservation instinct comes into play. In New England, people will either fully commit to using their Land Rover year-round or to storing it over the winter months to avoid the inevitable.

I’m sure that some readers are thinking, “Why bother owning a Land Rover if you are not going to use it throughout the year, especially during a season when it could most effectively be put to use?” My solution is to have multiple Land Rovers; I have three registered right now and am building a fourth. I’ve run my 1974 Series III 88” for 20-plus years – I enjoyed winter off-roading well before I honed my Rover preservation skills. This one is my sacrificial lamb; the second one is my LR4.

The LR4 is essentially the ‘daily driver,’ and like most modern vehicles, seems impervious to the abuses of salt. The Defender 130 is under the strict calendar rules and stays in its winter cocoon until the buds appear on the trees. It came from the South of France, has never been acquainted with salted roads, and shall remain that way while in my possession.

The last thing I want to do is run it in the winter and have the challenge of refurbishing or rebuilding it a few years down the road.

I discussed my travails with Mark Letorney of Rovers North, and he shared with me some eye-opening intel: “I once read an engineering study that stated calcium chloride (what’s commonly referred to as “salt”) increases corrosion in ferrous metal compounds by a factor of 900 times. Yes, 900 times! The use of calcium or magnesium chlorides on our roadways is why we don’t stand a chance battling corrosion.”

“Even worse than calcium chloride – Vermont (and many other state agencies) now widely use brine, a liquid magnesium chloride formula, which is more corrosive than calcium chloride. Unlike calcium chloride, brine does not bounce off the road. In fact, it actually has an adhesive quality, thanks to being mixed with lignin sulfonate, a natural wood byproduct that happens to be a great adhesive. This prevents the brine from being washed off paved road surfaces prior to winter rain events that turn to freezing. Not only does this enhance its ability to stick to your vehicle – but making it the deadliest culprit out there – it’s also tough to completely wash off.”

“The reason calcium chloride and magnesium chloride are so incredibly corrosive is because they are hygroscopic; they pull in moisture from the air. That’s why their corrosion rates are affected by temperature and humidity. In cold, dry air, they cannot pull in moisture to react with metals and will take on the appearance of white powder or spray. When moisture becomes available, the white powder turns clear, but that’s when their corrosive destruction occurs.”

“Does corrosion from chlorides ease off in the summer? Sadly, no. In Westford, VT, where I live, most of the roads are dirt. The average dirt road in Vermont loses two inches of surface per year due in part to winter plowing, but mostly due to wind and traffic dust erosion. So Westford regularly sprays its roads during summer months with a liquid 30–40% calcium chloride/water mix. When these dirt roads become saturated with rain, your vehicle is sprayed with an abrasive, corrosive mixture of calcium chloride-laden gravel.”

“Personally my reason for not driving my ‘chosen’ Land Rovers during the winter is simply because I hate rust repair and cannot easily replace my vehicles. I also have a winter Defender, because I cannot be without one. Even though I’ve built it up as corrosion-proof as I possible, I know that preserving it requires diligent washing and annual touch-up type maintenance.”

“I fight the fight every winter. Each year I get a little better at it.”

Does Mark’s list seem extreme? I recently had my LR4 up on a lift for a complete brake job – the accumulation of rust on the undercarriage horrified me. A modern Land Rover with several years of winter use will look new from all sides – except from underneath. Last Spring, I applied a healthy layer of oil undercoating to every surface under the LR4 and now, less than one year later, most of the oil is all but gone, showing massive amounts of new rust poking through the remaining black oil. The rear brake backing plates on the wheels actually had holes rotted through them.

From years of winter use and salt abuse, my Series III requires repairs I must address every year, but it’s hard to keep up with all of it at once. So far, the frame has held up through regular applications of Waxoyl to the undercarriage, but repair patches have been welded to sections on the horns. At different times, I’ve replaced the outriggers on the frame. Its rear cross member is a prime candidate for replacement; its outer Frankenstein-like welds are holding up, but it has severe rot on the back and undersides. The front door pillars on the bulkhead have oblong, inch-wise holes near the bottom where saltwater became trapped before it drained out The footwells I replaced 10 years ago are now ready for replacement again. Corrosion to the headlamp buckets, connectors, wiring, and other ancillary parts in the engine bay has created a state of disrepair. I learned that the hard way recently when the lights just stopped working due to a corroded wire – one that was intact when I left the house. Saline corrosion is a never-ending problem.

I wouldn’t trade living in Vermont for anything, but I am envious of Land Rover owners who live in warmer climates. There isn’t a single Land Rover owner in Southern California that has to worry about storing a vehicle for the winter. When you live in a place that “salts” its roads, you must adjust accordingly. Through constant diligence, I can maintain the trucks I have and easily replace parts that decay due to rust.

One thing I’ve learned – there is no part on a Land Rover that cannot be replaced or repaired. That’s why we love them.