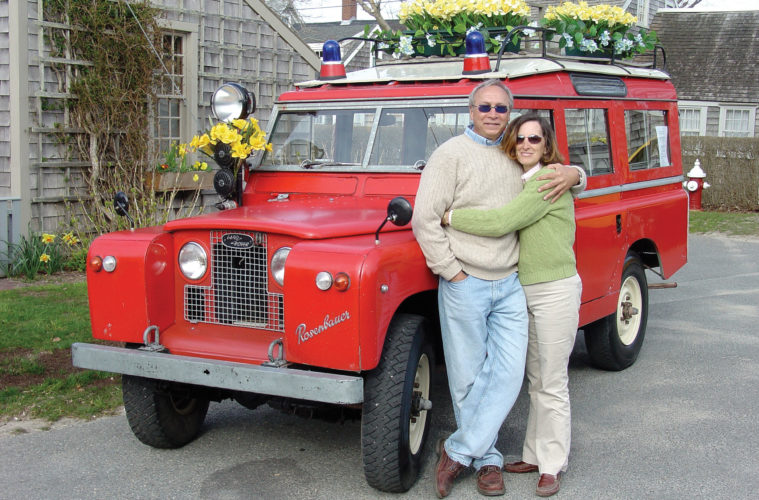 How Much Do I Love Thee?

My wife and I settled into our vacation cottage on Nantucket 17 years ago. Land Rovers have a storied presence on the island; friends told us that the “must have” vehicle would be a NAS Defender 90 in AA yellow. When my search began in 2005, I had no idea it would lead to a long-term love affair with classic Land Rovers.

The search yielded an extremely low-mileage Defender in the preferred color, happily with its original Warn winch, which I purchased from Copley Motors near Boston. However, while searching for my Nantucket Defender, I bought a ‘66 Series IIA 109” ex-fire tender 5-door. According to the British Motor Heritage build record, it had traveled new from Solihull to Vienna, Austria, where the fire-equipment firm, Rosenbaur, kitted it out. It spent its fire-fighting life with the Palfau Fire Brigade until its retirement in 2003, with only 11,000 miles on the odometer. In 2005, it found its way to John Dorr in New York, who put it up for sale. On the day of purchase, I asked John if the 109” would make the hour’s drive to our New Jersey home.

He said that “the 109 could travel to South America if I wanted – but very slowly.”

With that assurance, I headed out and can still remember the first sensations of minimal power for highway hills, the absence of power steering, the direct communication with the road, and the sense of quality and steadfastness. It had so much character – form and function to the max. Every detail and feature was scintillating; for example, the clever window shade radiator muff. For its age, everything seemed to be in remarkable condition; clearly, it had been well cared for, as one would expect of an emergency fire appliance.

Over many summers, we used the Defender 90 for beach cruises and excursions through the Nantucket moors. Our daughters would giggle incessantly as we plowed through the large mud puddles that would form after rainfall. There is nothing as fine as heading down the beach just yards from the breakers in 4th gear low range.

The 109” took over for family gatherings when we would all pile in with kids in the “way back.” Its age allowed us to enter it in the annual Nantucket Daffodil Festival antique car show, parade, and picnic. Our family had so much fun and we gained permission to use the blue lights and really loud European sirens while driving in the parade. Together, the Defender 90 and 109” seemed like the perfect combination of Rovers for island/vacation fun and adventure.

In 2008, I had the 109” repainted from its fire-engine red to green. I retained the spotlight tower with Bosch sirens to set it apart from the ordinary Land Rovers (if there is such a thing). Five years later, the annoyance of having to rent commercial garage space for winter storage of our Land Rovers began to wear on us. In a weak moment, I sold the 109” to an island acquaintance, who subsequently entered it in the Daffodil Festival Parade and won – twice!

Once again, I coveted a Land Rover – but this time, I decided to source a Land Rover 110 from the UK and found one at a specialist shop. I chose the colors and kit, and then waited, and waited, and waited well beyond all reasonable expectations as to when the 110 might make its way to the US. It finally arrived in 2017 and immediately turned from nirvana to a nightmare. I extricated myself from that Land Rover after a necessary engine swap from a blown 19J to 300 Tdi. I replaced it with an ’87 110 County Station Wagon, also an ex-fire tender, from northern Italy. It came with a log book that meticulously recorded each trip, its purpose, and even each driver! That validated its 10,000 km on the odometer. Nirvana – it retains all the original decals and labels and even smells new inside.

In 2019, my collection grew to include a ’94 Arles Blue NAS D90 soft top, with the 5-speed manual transmission, the original Tickford soft top, and rear taillights. Minor upgrades included a Borla exhaust, 2” wheel spacers, a fancy stereo system, and, most importantly, a POR 15 treatment on the undercarriage. (The Arles Blue color, which I consider stunning on a Defender, had only been available that one year.)

With my Defender itch thoroughly scratched, I turned my focus back to Series Land Rovers. By 2020, I really rued my decision to sell my 109”. Fate intervened when its Nantucket owner offered it back to me. While I really enjoyed it during my previous ownership, I didn’t have the knowledge or experience at the time to truly appreciate the metal dash, original interior, and unmolested nature of such a classic Land Rover. And most of all, it’s personality.

I do now. So much so, that when a ‘62 109” 2-door soft-top came along, I bought it to serve as the perfect mate to the other 109”. The new 109 “Beach Runner” was a frame-up built on a galvanized frame. I loved the idea of its canvas top, removable door tops, banjo steering wheel, parabolic springs, deluxe bonnet, Winterburn electronic ignition, and – ironically – its Kodiak heater. “Dakota” would later gain a Roamerdrive unit and an Aeroparts capstan winch.

In 2021, I realized the time had come to find a Series I to add to my classic Land Rover collection. I had known of George Hughes’s ’54 Series I 86” soft-top for some time as his company, Authorized Imported Cars in Flemington, NJ, had become my “go-to” shop. George and I would sometimes joke about my one day owning his Series 1 86”, “Molly” (named after the “Unsinkable Molly Brown”). He had kitted it out for off-roading with differential and gas tank guards and air lockers but included parabolic springs and a Roamerdrive for road use.

The sale of Molly came to pass and George confidently said to me, “You will like driving Molly more than all your other Landys.” Indeed, Molly’s short wheelbase, lightweight, and sweet 2.0L engine allows her to just scoot along on and off the roads. Of course, driving each Land Rover brings a smile to my face – I mean, what could be better than that?