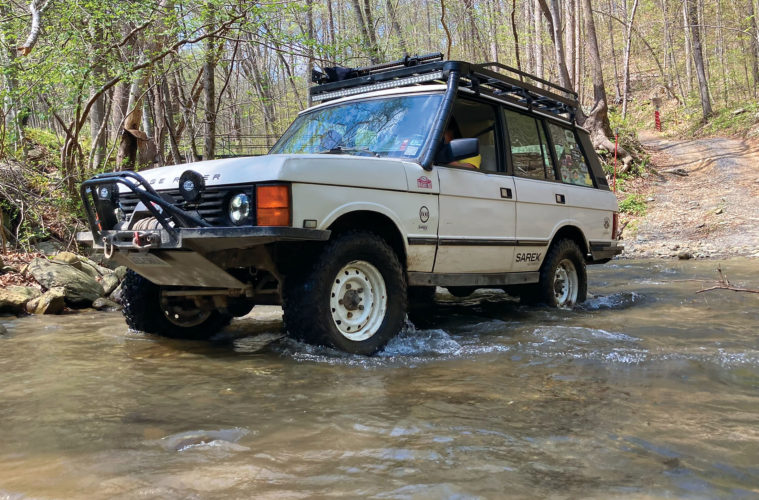 RaW, which I had the pleasure of attending, boasts the comfort of a fine ski resort. Indeed, in addition to some of the finest ski runs in Northern Virginia, Wintergreen hosts several fine restaurants with excellent food, support staff to ease the challenges of the club volunteers, heat and/or warmth in your individual room, and brilliant views of the Blue Ridge Mountains. There’s a subversive pleasure in driving your Rover underneath ski lifts on fire roads and trails. Think “Ferris Bueller’s Day Off,” but in Land Rovers, not Ferraris.

To add to my upscale experience at the Wintergreen Resort right from the start, I decided to fly to Washington and have my chauffeur – I mean ROAV president and event organizer David Short – whisk me across the Blue Ridge Parkway to the event. Well, since we drove in his ’80 Stage 1, perhaps “pound” should replace “whisk.” Thoughtfully, David provided a full jar of disposable earplugs to choose from. I’d like to believe that their presence arose out of concerns for aural safety, but I fear he brought them so he didn’t have to listen to me.

You can gauge the popularity of ROAV at Wintergreen from the distances that enthusiasts drive to enjoy the mountains. For example, Raub Robinson drove from his job in North Dakota; Gustav Dow traveled all the way from California. Ron Peppard came from Massachusetts; Carlos Melo, Leny Soberanis, and their respective dogs arrived from New York City. Numerous license plates from Virginia and neighboring states further demonstrated the popularity of the event. All in all, ROAV tallied over 100 different Land Rovers registered, with plenty of additional family members present for the long weekend. Jesse and Kendra Martin, Charlotte, NC, spent considerable time chasing their two sons – who were clearly having a good time. It was also wonderful to catch up with long-time attendees/enthusiasts David Powers, Doug and Trey Crowther, Kraig Mackett, Marlon Bevans, Christian Toth, Helene Raynaud, Daryl Beasley, and Regina Recifo, Robert Davis, Peter Cosmides, Mark Formanek, Mark Garrenton and Russell Green, among many others!

ROAV has a well-deserved reputation for the strong organization at all of its events; this year, the Wintergreen trail rides included skilled guides who led beginner, moderate and advanced level challenges. David Short, Bob Steele, Tyler Smith, Larry Michelon, Tim Coats, Sarah McCaig, Mike McCaig, and Mike Boggs gave their time and leadership capabilities to keep the weekend entertaining. As you’d expect at a ski area, Wintergreen’s trails are steep, narrow, twisty, and rocky. In wet weather, they’re a handful; in this year’s drier climate, they still felt daunting.

I jumped in with Clay Ayers for a one-morning trail run, led by Mike Boggs. Clay needed little assistance as he skillfully helmed his Defender 90. We wended our way up and down significant inclines and descents, all the while navigating off-camber trails through tight turns around large trees. I watched experienced off-roaders such as Catherine Mannis (and her son, Cody), Doug Crowther, Charles Galpin, and Ron Peppard inch their Land Rovers over rocks and around obstacles as gravity tried to send them careening into trees. In these instances, Mike demonstrated his skills as a trail leader. He remained calm, reassuring, and capable as he guided his convoy. We would stop at each possible trouble spot so Mike could marshal his group effectively. Some winching proved helpful when the trail’s camber proved too much for downhill turns. His instructions reminded me that balance remains critical when off-roading; learning how to “bounce” your Land Rover, using gravity and momentum as opposite forces, can become very helpful in tight situations.

Later, I joined Lawrence Michelon in his ’88 Range Rover Classic. “I’m a fan of the Range Rover,” he told me, as we glided gently along the narrow trails [He also owns a stock ’89 Range Rover Classic -ed.] From a passenger’s viewpoint, there’s something very elegant about the cabin of the Classic. The thin windshield and door pillars accentuate the seemingly vast greenhouse of the vehicle, but its compact dimensions in terms of wheelbase and width make it nimble and accommodating on what otherwise might seem like challenging terrain.

While the “Advanced” and “Moderate” trails appeal greatly to the many experienced off-roaders, the Wintergreen event also attracts more novice enthusiasts. Bill Rickman, Richmond, VA, grew up with his family’s Series IIA 109” but drifted away from Land Rovers for many years. Now, he works at Sarek Autowerke and brought his ’06 LR3 for its debut off-roading experience. An exposed wire caused a problem with the air suspension system, but otherwise, he found the LR3 supremely capable and very entertaining. Virl Ritchie (Defender), Daniel Sheets (Range Rover L322), Thomas Victors (LR4), Jack Rushing (Series), and Rob Richardson (Series) all enjoyed the “light” off-roading. Fortunately, the dry surfaces helped even the steepest ascents and descents prove manageable – perhaps to the relief of some less-experienced off-roaders. At every juncture, trail leaders and participants alike sought to assist novice off-roaders as needed.

Katherine DeRosear and Rob Richardson brought their sons, Liam and Jackson, in their ’72 Series III, purchased only a short time before the event. “We had owned a one-year-old ‘04 Discovery II two decades ago,” noted Katherine. “When we bought ours, we went to an off-road day at the Homestead and drove around on the trails. We were taught how to use the Land Rover’s capabilities. I don’t like mountains to begin with, and with the ascents, descents and side slopes, I didn’t want to fall off the side of the hills! Matt Bigelow of Land Rover Richmond took us out on the course and tried to push it over, just to show me just how capable the Discovery was.”

“I wanted a Land Rover again,” Rob confided. “This Series III had been owned by a farmer in South Carolina but had sat for a long time. I had it trailered to Richmond, and Gregg McClellan’s Paradise Garage took it on. It needed a lot of welding, as well as new springs, bushings, outriggers, and a rear cross member. I wanted it ready for Wintergreen.” Jeremy Gallagher, a mechanic at the garage, confirmed, “it was pretty rusty and rough when it came in here. We did a lot of welding work on the back half of the frame. I told Rob that I go to a lot of off-road, rock-crawling events and that he’d be surprised at just how capable they are!”

Indeed, on the Wintergreen trail runs, Rob found the Series III “very ‘trucky’ – making a lot of noises at speeds of 3–5 mph. I followed David Short going down the mountainside and got to the first creek. We watched the Rovers go through the water crossing, and then, when it was our turn, we got high centered on a rock. Everyone moved to help. I had a tow rope and the Land Rover behind us had a winch. A quick tug pulled us off the rock, and off we went. “

Katherine enjoys riding in a Series III. “No matter where we are, I feel as though we’re in a parade,” she said. “It makes people smile at us. We like to go to live music and breweries. We get a lot of questions when we stop. It’s a good conversation starter. And it was great at Wintergreen!”

Jackson, age 22, noted that “I liked learning how to drive it. It feels like I’m actually a part of the vehicle.” Liam, 19, agreed. “I had no idea of the differences between a Series Land Rover and a Defender,” he laughed. “After Wintergreen, I do! I’d also never driven a manual transmission vehicle before. It was difficult at first to get a feel for the clutch action and the gears, but it’s really nice to be in an older vehicle. I showed it to a Jeep friend – I think he’s envious.”

The Series III “ran well enough at Wintergreen, but it had a Rochester carburetor on it and at times, it seemed problematic,” Rob said. “Mike McCaig worked on it, as did two enthusiasts from Tennessee, but it never seemed quite right at the event.”

“Afterwards, Mike connected me with Ben Saunders, who works on Rochesters. He said, ‘Bring the Land Rover out to me,’ so I did. We spent four hours of work and chatter, and I enjoyed it thoroughly. It turned out that the top part of the carb had seized up, and he also gave me a new fuel pump.” Here I am, brand new to the club, and 40-year members helped me! This is an amazing group.”

Land Rover Richmond (VA) harkens back to 1988 when then-Range Rover North America selected its first dealerships. “It’s remained a major supporter of the Rover Owners of Virginia (ROAV) club over the decades,” noted Bob Steele, past president of ROAV.

“Land Rover Richmond has believed in the value of supporting local enthusiasts, the fellowship of our club, and the value it brings to the marque,” Bob continued. “I think they’ve been with us since our first MAR in 1994, and have supported us through thick and thin.”

A Buffalo native, General Manager Matt Bigelow began working at Land Rover Richmond in 2003. He also appreciates the connection with the club, noting, “Jaguar Land Rover Richmond has enjoyed our long partnership with ROAV and will continue to support our mutual interests in the JLR brand going forward. As a dealership, we recognize the importance of participation at the club level and welcome all Land Rover enthusiasts to stop in and preview our evolving brand and new model vehicles.”

The dealership is part of the Hyman Brothers Automotive Group, founded 72 years ago. Haywood and Thomas Hyman remain very involved, securing the Jaguar franchise for the dealership three years ago.

Land Rover Richmond began supporting Rovers at Wintergreen with its first iteration in 2013. Their “pre-worn” hats have become iconic swag for attendees. Matt jokes that he “put the bite marks in the brim” himself.