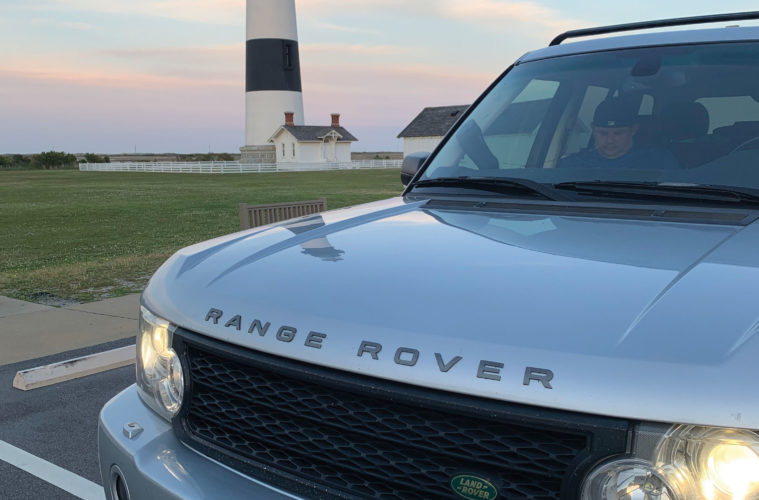 This is a single strand of RNA that folds back upon itself. Highlighted are the nucleobases (green) and the ribose-phosphate backbone (blue).

While I’ve certainly heard the expression, “Land Rovers are in my DNA!” tossed around over the years, I have actual proof that Land Rover RNA (Ribonucleic Acid) actually exists. Allow me to present my scientific findings.

A month after my birth in 1970, an amazing set of parents adopted and raised me in Richmond, VA. They often recounted the unusually frigid evening on the night before Thanksgiving, when an agency answered their prayers and my adoptive parents brought me home for the first time. The appropriate agency could only share that my birth parents were very young and very, very kind. Over time, we would use our collective imaginations to color in all of the missing bits, but the narrative was always one of love.

My genetic connection to the marque had to wait until 1989, my senior year of high school when I spotted an Alaskan Blue Range Rover Classic in my Richmond neighborhood. I had never seen anything like it – a mix of elegance and, “Let’s do this!” From that moment on, I always kept a keen eye out for them on the road, and would always make a point to wander through the Land Rover Paddock at the annual Strawberry Hills Steeplechase. That’s where I saw the first Discovery II that snapped my head around – a gorgeous Armada Gold number that never left the back of my mind.

Fast forward to 2013, a month before my wedding, when my fiancée mentioned we should look into a bigger vehicle to support her volunteer work with a local dog rescue. I immediately thought of that original Discovery, and after a brief online search, I found the perfect companion: a well-cared-for ’01 Discovery II in Chawton White (named DeeDee!). Numerous rescue dogs, as well as our two 100-pound Akitas, thoroughly enjoyed the rear cargo area – as did our friends at Carolina Panthers tailgates. And despite her off-road capability, DeeDee’s two shining moments actually occurred on-road: delivering me safely through a Christmas Day whiteout blizzard along Lake Erie, and traversing the sidewalks and darting across the medians of Uptown Charlotte as I shuttled my restaurant employees through the chaos of the 2016 riots.

Still, the luster of that first Range Rover never dimmed, so in 2019 I started looking for a companion for DeeDee and unearthed a near-perfect condition ‘08 HSE in Zermatt Silver. The “Silver Surfer” quickly lived up to its name, exploring the beaches of Cordova, Rodanthe, and Buxton in North Carolina’s Outer Banks, and then the mountain trails of Virginia at ROAV’s 2021 & 2022 Rovers at Wintergreen events.

Fast forward again to a week after my 50th birthday (a lot of stuff happened in the interim!), and my parents received a call from the appropriate agency requesting my contact information so my biological family could share some non-emergency medical information with me. Being the type to always take on a new adventure and figuring (correctly, I might add) that the timing would suggest an attempt at contact rather than simply adding to my physician’s patient file, I reached out to the agency’s Search and Reunion Specialist to take the next step. And what a step it was!

After giving my consent, we began the layer-by-layer peeling of the proverbial onion, starting with a letter left for me by both birth parents ten years prior to my 40th birthday. I was encouraged to reply to them via email and was assured we could begin non-identifying communication while the agency began to initiate the lengthy process required before initiating direct contact. By the time I finished reading Nancy’s first reply (I now knew my birth mother’s name!), I realized I was in for a heck of a wild ride that would reveal some incredible coincidences and a trail of tasty breadcrumbs that would lead me to her well before the agency deemed it permissible.

In her letter, Nancy painted a wonderful picture of her life (non-identifying of course!) with her husband Mike, daughter Sarah and son Adam (I had siblings!). She spoke of their family’s love of the outdoors and their mid-1800s Central Virginia farmhouse, which was a perfect setting to enjoy all things equestrian and… Land Rovers! Pure music to this Discovery II and L322 owner’s ears! After the initial elation of this discovery (pun intended) wore off, I realized that I might just have some useful clues embedded in the text to start my own cyber-search for Nancy and circumvent that pesky waiting period. So off to the ROAV website I went…

Toggling between Facebook and the ROAV site, I scoured the posts and chats for every Nancy, Mike, Sarah, and Adam that I could find and attempted to match them up with a Facebook profile that might fit the bill. After about 10 minutes, realizing that I might have a several-hour endeavor ahead of me, I decided to check the ROAV Board of Directors page. There I found a Mike McCaig – Vice President – at the top of the page, and then a Sarah McCaig – Secretary, directly underneath. Promising! When I cross-referenced Mike on Facebook, the first photo I saw was of him with the Oxford Across America Series I at the Cape Hatteras Light. Eerily, the photo mirrored the many I had taken with my Land Rovers at other Outer Banks lighthouses. Then I anxiously checked to see if his Facebook profile was private or public, and bingo: Married to Nancy McCaig! Daughter: Sarah McCaig! This had to be my clan, right?

As I pulled up Nancy’s Facebook page, I found the proof was in the pudding. She had laid out every facet of her life that she had shared in her email: the years spent in radio, the horses and carriages, the beauty of Penlan Farm, and of course all of those Land Rovers! After showing my wife Shelly my findings, we agreed to bypass protocols and I sent Nancy a Facebook message with a photo of me and my Discovery under the Bodie Island Light. The message read, “I think I found ya! And it was Land Rover that ended up being the link.” After about 5 minutes, she responded, “We were always good at going in the back door!”

And kick the door down we did! Once we started “catching up” on the past 50 years, we realized our uncanny proximity! My middle and high school building stood across the street from Nancy’s family homestead. My 5th and 6th-grade cross-country course took me directly past their front yard. After meeting Nancy’s youngest sister, we realized that the two of us had briefly worked together in a local restaurant during my senior year in high school (I was a busboy and she was my favorite server who always tipped me extra). And when Nancy started telling me about her years announcing the carriage parades at the Strawberry Hills Races, my jaw truly hit the floor as I realized I had heard her voice year after year while setting up our tailgates on those early Saturday mornings!

Considering the role that our love for Rovers played in securing the connection, it made perfect sense that we would meet up at the 2021 Rovers at Wintergreen for our first family outing. Indeed, after the 2022 event, we had clearly established a new family tradition. How better to celebrate this uncanny link than an annual remembrance of how Land Rovers brought us together!

DeeDee the Discovery II is currently being kitted out for more serious trail rides, and will soon be spending her days with my father back in that same Richmond neighborhood where my Land Rover passion first sparked up. And we eagerly await the 2023 Rovers at Wintergreen when we can drive the trails for the first time together!