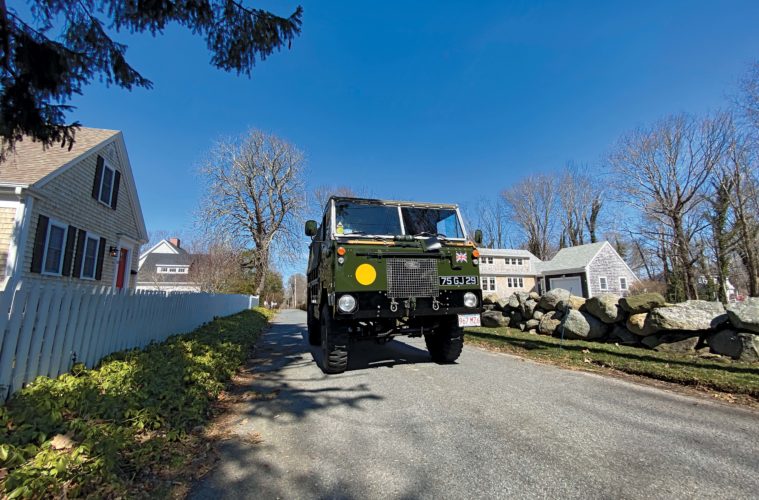 While giving me a tour of his renovated antique Cape house, Paul Lewis admonished me with a smile. “You can do anything that anyone else has done. The only thing stopping yourself is you!”.

I had been marveling at the many finish carpentry design details throughout. When I asked for the name of his builder, Paul replied, “It was me. I did everything but the chimney.” He continued, “All you have to do is listen to those with more experiences – I mean really listen. There is a vast pool of knowledge out there, in each person you pass. It’s just a matter of seeking that out and doing it.”

As a Land Rover owner, I get his point. I cannot afford to hire a mechanic for every issue presented by my Series IIA; I need to learn from other people.

Paul has an air of quiet competence about him that has likely been earned through several decades of thoughtful handicraft as a “panel beater” vintage vehicle mechanic, high-end sailing yacht carpenter and vintage truck mechanic. Sure, it’s ok to hire tradespeople for repairs and improvements, but walking around his antique house, I can feel the pride Paul takes in all of his work.

Chatting with Paul about his personal history and collective knowledge, I think back to the Rover mystery that led to our meeting. Many years ago, I spotted an immaculate FC 101 in the neighboring town of Yarmouthport, awaiting the dreaded Massachusetts Vehicle Inspection test. No, it’s nothing compared to the UK’s MOT, but only recently did our local inspection centers fall under state-regulated surveillance. No longer could we use the, “Oh, take it to Bob at Durham’s Texaco Station, he’ll pass anything.” As I’m in law enforcement, I accept that the annual inspection process should weed out unsafe vehicles.

Driving by the old gas station, I marveled at that boxy beast, towering over cookie-cut sedans and run-of-the-mill Jeep Wranglers. They’re a rare find even in the UK – over here in the US, I can’t imagine there are more than a handful. Although I went on my way, the FC 101 lingered in the back of my mind.

Recently my good friend and fellow enthusiast Andrew Maker remarked in passing about his neighbor, Paul, an ex-pat UK army veteran who had a few ‘military-style Landys.” My ears perked up and the hair on the back of my neck stood tall – could this be the same FC 101 from the past? Andrew gave me vague directions on the whereabouts of this gentleman and his Land Rovers and for months I kept my eyes peeled, hoping to catch a glimpse. My luck turned when, driving down a narrow street, I noticed the back end of a military Lightweight emanating from an old carriage house. Looking around, the setting seemed right out of England: a narrow, sunken street bordered by old stone walls and stately barns. I noticed the owner of the property nearby, mowing the grass in an apparent ‘break’ from splitting firewood. I parked and approached him, holding out a Land Rover decal (my olive branch to another Land Rover owner).

Paul dismounted from his John Deere and we met in front of his Land Rover. After explaining my fascination with the 101, and seeing that I wasn’t just a tire (tire) kicker, he asked if I wanted to take a stroll to see it. Peering back at the colonial-era carriage house, I wondered how an extremely large piece of military equipment could fit inside. We walked down that same narrow drive to a neighbor’s home, giving us enough time to share our common interests (my father’s favorite tactic when meeting new people). Paul slid open the vast wooden door of the antique barn and – ah! – inside sat a thing of beauty: a Forward Control 101 GS. I had found it at last.

Circling the Land Rover in awe, I asked Paul what made him want a 101. “I guess it was its rarity and uniqueness” he responded. “I think we all strive to be different and to stand out in a crowd. Plus, I’ve seen the 101 in action, doing what it was intended to do; it has a massive range of capabilities.”

Paul’s story began in St. Albans, Hertfordshire, around 25 miles north of London, where he was exposed to Land Rover ownership at a young age. “When I was 14, my father purchased his first new vehicle, a ’72 Series III SWB. He went on to restore an early Series I, a Series II, a ‘96 Range Rover, and finally a Defender 90 County V8.”

As an escape from home life, Paul joined the Royal Military Police in 1976. When not assigned to normal patrol functions, he performed “signal operations,” essentially “idiot-proofing” convoy routes. In this capacity, he first saw the newly issued FC 101. “My first encounter with 101s was when stationed at Aldershot. While on general duties, we were ordered to the MT (Mechanical Transport) section to prepare vehicles for exercise, and I came face to face with my first 101, still in its new bronze green livery, but with a crumpled front end. It had been impounded by the SIB (Special Investigation Branch). Apparently, it had been taken by an officer at Sandhurst Military Academy while under the influence and had hit a deer on the academy grounds.” Even in its damaged state, it made an impression.

After his three-year stint in the Army, in 1979 Paul remained in the reserves. His service allowed him to travel abroad to many interesting places, including Schleswig-Holstein, Germany. He recalls “American forces serving along with German conscripts, having lunch in a field kitchen in the bombed-out ruins of one of Hitler’s military barracks! I spent time with German soldiers, a large number of whom wore hairnets to help contain their long hair.”

At approximately the same time as his deployment to Germany, Paul’s 101 was “manufactured” back in England (May 1, 1980). As Land Rover stopped producing the model in 1978, he theorized that his 101 arose out of a large number of spare parts. Paul’s 101, chassis number 960-00460, was the 14th-to-last 101 Forward Control to leave Solihull, nearly two years after the “end of production.” Thankfully, Paul has a treasure trove of documentation, including the original MoD transfer certificate, listing the vehicle as a “Land Rover 1 Tonne Dropside LHD”. It showed the vehicle “cast” (removed) from service in January 1994 with only 2,241 miles. It sold at auction to a good friend of Paul’s for £5,692.50.

Following his post-service career as a high-end carriage maker, Paul emigrated to the US in 2001, settling on Kent Island, MD. He imported the 101 in 2003 and brought it to his newly purchased Cape Cod B&B in 2009. He chose to drive the 101 the 450 miles, clearly its longest trek. It now has about 11,000 miles but remains in nearly perfect condition. This military survivor has “never slept outdoors,” Paul asserted.

It was evident to me that Paul spoke the truth. Walking around the 101, I looked under it to find maybe a tablespoon of oil on the otherwise clean concrete floor (and yes, Paul assured me that the sump was properly topped-up). The chassis didn’t have a hint of rust, the body had no dings, and no army mechanic had taken a paint roller to it. The canvas tilt looked as if it had just been unboxed and then ironed onto the hoop set. Paul climbed into the cramped operator’s cabin and sat uncomfortably ( I’m surprised he didn’t take his shoes off first before contorting himself to sit behind the wheel.). A twist of the ignition key and the 101 started on the first try.  As my Land Rover is a Series IIA, I haven’t heard the sound of a Land Rover V8 in some time – it was mechanical music to my ears. Paul has one of the finest Land Rovers I have ever been lucky enough to see.

As for those commonalities we spoke of during that initial walk to the 101, Paul grew up just minutes away from my wife Meagan’s former home in Croxley Green. At different ends of our working lives, we’ve both worked in law enforcement. Like Paul, I pride myself in knowing how to do a little bit of everything and not needing to rely on others with frequency. I’m not quite ready to renovate an entire house, but maybe Paul can give me some guidance when the day comes.

It turns out, Paul and I now live about five minutes from one another on this sandy spit of land we call Cape Cod. I recently asked Paul why he chose my birthplace as his final home. “I love my neighbors and the sense of community that I feel living here. Plus, it’s the closest thing to England that you’ll find in the USA.” Funny to think that for the majority of my life, an extremely rare Land Rover was tucked away in a nearby barn. Its owner may be from the other side of the pond – a “washashore” in local terms – but he represents the true qualities of a native Cape Codder.