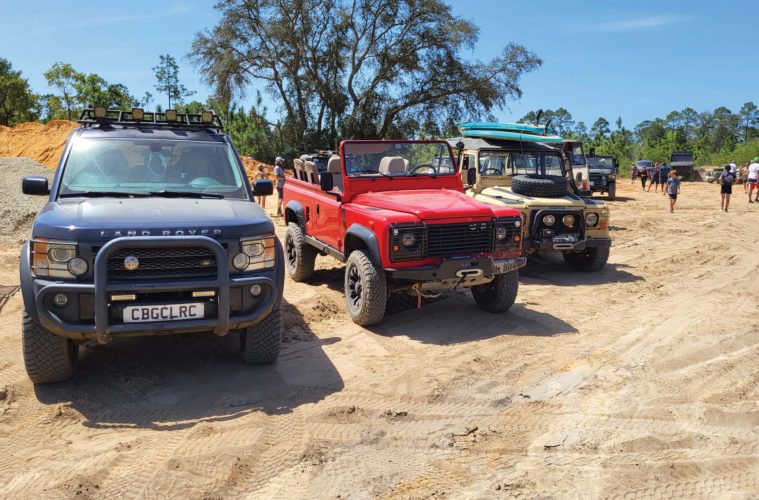 Paradise on the Panhandle

Does absence make the heart grow fonder – or forgetful? When it pertains to the 30A Sand Rover Rally, the heart definitely grows fonder.

Due to pandemic restrictions, the last Sand Rover Rally event took place in April 2019. Our Gulf Coast Land Rover Club members suffered from withdrawal, as this was the only large event within a 6-hour drive. Finally, in late 2021, we received word that the rally would return on April 22–24, 2022 – bigger and better than ever. Mike Ragsdale, who had created and organized the rally every year since 2014, transferred responsibility to the very capable Daisson Hickel, a former Green Beret and Land Rover enthusiast.

The festivities began with the official 30A Sand Rover Rally Kick-off Party held at the Grayton Beer Company taproom on Friday night. The brewpub became an emergency stop when heavy rains forced a change in venue a few years ago; its hospitality and conviviality made it the go-to choice this year. Enthusiasts enjoyed cold drinks, good food, and live music featuring the Pickled Pickers. Outside, everyone admired the many classic, custom and one-of-a-kind vehicles that filled the parking lot and overflowed onto the streets. I saw some great old friends and met new ones. We shared stories of past 30A events and caught up on the adventures of the last couple of years. We talked about everything – vehicle repairs, modifications, and trail rides. Stephen Ogletree, the founder of sponsor Adventure Motorcars, Birmingham, AL, and I discussed our Saturday plans; he jokingly asked me to grab him a donut. I also spent some time catching up with an off-road instructor and former Camel Trophy driver Bill Burke. Bill is a wealth of off-road information, and I try to glean as much knowledge from him as I can. He also has some amazing stories.

Saturday’s gathering did not start until later morning, so we all could sleep in a little. My family got ready and headed over to the Donut Hole, a place that has become our family tradition for breakfast at the event. They feature good coffee, full breakfast options for my hungry sons, and, of course, donuts. As we pulled into their parking lot, we spotted several Land Rovers – a sign of good food and a great choice in vehicles. Of course, parking rules are applied; it’s a moral imperative. We enjoyed a great breakfast and then headed over to the main event – with Stephen’s donut intact.

We all drove to the nearby Topsail Hill Preserve State Park. Unlike previous years when parking was first come, first served, this year 80 vehicles were selected for display. The rest of the attendees parked at an elementary school and were shuttled to the State Park on a

“Get a Goober” bus. We found a spot just across from one of our fellow Gulf Coast Land Rover Club members and had room to set up our day tent accessory off the back of my 2007 LR3 (“Brutus3”). The winds had picked up and unfortunately, I had left our tent stakes at home. Thankfully, the Land Rover community likes to share, and an enthusiast loaned us some of his extras. With the tent squared away, we began our rounds of admiring the fun and unique vehicles.

I walked over to the Adventure Motor Cars tent to deliver the coveted donut to Stephen, which he accepted with genuine appreciation. My next stop was to see my longtime friends Kip and Sean Eden of RMR4X4, also of Birmingham, AL. They brought their 2020 Defender TReK edition, a great-looking rig. We talked about business, vehicles, and the crazy things that can go on in a shop (I’m a Land Rover Master Technician). Bill Burke’s tent featured his much-traveled Defender 90 as well as a scrapbook of incredible photos from his Camel Trophy days. After spending a considerable amount of time looking at his scrapbook, I continued on my stroll until I met a guy named Enoch Elwell and two Land Rovers, a Discovery II and a 109”, from his Vintage Outfitting company of Chattanooga, TN [See Spring 2022 issue –ed].

Of course, I had to visit with my friends at Land Rover Gulf Coast, again the presenting sponsor of the rally. Having worked there for over a decade, it’s always good to catch up with them. Their parts manager, Mitch Ducote, had his ‘07 LR3 parked alongside the dealer’s new Range Rover and Discovery 5. I took a spin at their giveaway wheel and – SCORE – won an event shirt (too bad a new Land Rover was not one of the prizes on the wheel). Long-time sponsor Coastal Customs and Restorations out of Freeport, FL and new sponsor 34 North Defenders from Atlanta, GA, also had impressive Land Rovers on display.

The Gulf Coast Land Rover Club had a wide array of vehicles on display too. Although we’re based in Mobile, AL, the club has a strong presence along the Florida panhandle and throughout the Southeast. Mickey Slade, Long Beach, MS. brought his impressive FrankenRover, a Land Rover Series IIA body installed on a Discovery frame and powertrain. Longtime friends Anthony and Alaina Poole, Pinson, AL came in their Range Rover Classic. Jesse Jackson brought his ’04 Discovery II down from Birmingham. Mike Hall from Panama City, FL had his white Defender. Alec Breaud from Pensacola, FL showed his LR3; Ben Montgomery from Fairhope, AL, had his soft-top Series IIA. Heath Holmes brought his Discovery II down from Tuscumbia, AL. Daisson Hickel, the event mastermind, brought “Betty,” his red ’92 Defender 90 and of course Mike Ragdale’s “Truman,” the ’86 Land Rover 90 which has served as the event’s icon [See Winter, 2014 issue -ed.], and was proudly on display.

The following morning, we joined the trail ride through the pines and sandy trails of Point Washington State Forest. Everyone met at the YOLO Board Distribution center, located near one of the forest road entrances. YOLO Coffee graciously provided hot and cold brew coffee to start the day. Daisson, Bill Burke, and I made our final plans for the 25-vehicle trail ride. Recent dry weather had resulted in several forest trail closures, but we would enjoy an easy, entertaining ride. We would convoy to an undisclosed location where YOLO Coffee would provide a coffee stop. At the trail briefing, Daisson informed the drivers of the intended route, and I discussed trail safety and etiquette. Daisson took the lead, Bill Burke took the middle and I was the tail runner. It was nice not being the trail leader for once.

There were at least 25 vehicles on the ride. The lack of rain made the forest roads dusty, and the mud holes of previous years were now just dry depressions. I enjoyed seeing so many off-road enthusiasts taking their vehicles out for a leisurely stroll through Point Washington. After several miles of trails, we made it to our destination, a large clearing in the forest that we had reserved for our event. We gathered for a group picture and a last cup of coffee before going our separate ways to Mississippi, Alabama, and Florida.