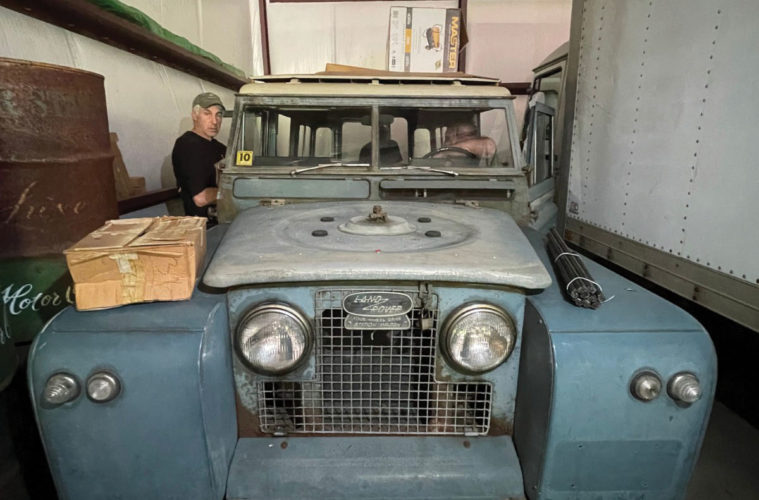 In May, my buddy Mike Capozza, Scarborough, ME, called with a story. A guy named Rich used to work the night shift at the Portland Post Office, right near Mike’s plumbing shop. Thirty years ago, when Mike would spend late nights in the garage bay of the plumbing shop rebuilding Land Rovers, Rich would wander over to chat about his desire to own a Rover. Mike eventually helped him find a mid-60s Series IIA 88”, which became his daily driver. Rich moved on and lost contact with Mike two decades ago.

Recently, out of the blue, Rich called Mike to say that he was moving back down south, and that he wanted to sell his four Land Rovers: three Series 88s and a rare NADA 6-cylinder 109”. My first thought on hearing this tale was, “There’s always room for one more Rover,” so I planned a trip to Maine. I convinced Mike Kenney and Bryan Wittler to join me in my Defender 130, and we headed to Mike Capozza’s home. From there, we headed further north to John Vallerand’s house in Greene, ME, where we spent the weekend.

After a hearty breakfast prepared by John, we took two 130s and zig-zagged on back roads to Rich’s place on the coast. Unfortunately for us, a potential buyer had already begun negotiations for the 109, but the 88s remained available. (One of those is still under consideration by me; I really want to have another trail rig ready here in Brattleboro when friends come to visit.)

Over the rest of the weekend, we sifted through John’s large parts hoard, where I found a really nice galvanized rear cross-member for my Series III. Attached to a gnarled hulk of a rusted frame, it came off with a few quick cuts of a Sawzall. I also found a nice set of Warn M11 locking hubs on a lone axle tossed on a scrap pile. I was well pleased. The next day we went to John’s other property, where Mike and Bryan picked up random parts such as rear doors for a 109”. We ended up filling the back of my 130 before heading back to Vermont.

In June, my wife Robin and I went to Italy for a holiday. Upon arrival in Rome, we set off to explore the many historic landmarks in the city and meandered through the narrow alleys. While walking down a random side street that came to a “T,” we spotted a colossal, partially crumbling brick building ahead of us. We took a left at the building to walk around to the front side – I rounded the corner and came upon a camouflaged Defender 90 with the Italian Army insignia emblazoned on the door. Ignoring the building, I walked vigorously and directly to the Land Rover and started taking photos. When I got around to the driver’s side, I looked up and realize that the building I’d been ignoring was the iconic Pantheon – the architectural masterpiece not far from the site where Brutus stabbed Julius Caesar. The Italian Army guards most major sites of importance, usually in one of two vehicles: a four-wheel drive Iveco LMV or a Land Rover Defender 90.

Standing in the middle of the square was an Italian soldier, dressed in camouflage fatigues and carrying a full auto Beretta AR70/90 machine gun. I enthusiastically marched up to him and asked, “Is that your Land Rover?” His English was not very good (yet better than my Italian) and he seemed quite alarmed at my shouting and pointing at his work truck. I told him I was a Land Rover enthusiast, which he didn’t quite understand. Then he noticed my Warn winch logo t-shirt as I was gesturing gripping a steering wheel and moving up, down, and sideways as if on a rough trail. Immediately he cracked a smile and enthusiastically (and slowly) started telling me that he is a member of an off-road group in his hometown on the island of Sardinia. He said that, to be honest, the ‘92 naturally aspirated 2.5L engine was much too weak for the stuff he does on the mountain trails back home, but that it did the job of getting him from the armory to a cultural site every day for work. (It’s hard to believe that they are still using thirty-year-old Land Rovers in the Italian military.)

I returned home a happy man, having seen the most important cultural artifact in Rome – oh, and the Pantheon.

Since last April’s Weenie Roast, I’ve been lucky enough to hit quite a few trails in southern Vermont. I’ve exchanged many impromptu weekend calls with the few local enthusiasts – ”Hey, you wanna try that ridgeline between Townsend and Athens?” – and off we go. Sometimes it will be just two Rovers, other times four or six, but just getting out there resets the mind. Recently I joined Mike Kenney and his son Rowan, who had brought along his school friend, Julian. Mike lives in Taunton, MA, but has a camp in Vermont where he often leaves his Rover. Julian had never been out of the city before; this off-road adventure would become his first foray into “the country.” Overall, he remained quite reserved – until the moment when Mike’s Series IIa 88” started climbing 40 degrees straight up a ledge on Townsend’s Turkey Mountain Road. At that moment, Julian broke out of his shell with constant screams of excitement as if he were on a rollercoaster ride! His cries of delight and his smile said it all!

At my shop, I’ve been doing a ton of little odd jobs on one of the four Land Rovers: the installation of new galvanized doors and exhaust hangers on the Defender; general upkeep on the Series III; rebuilding of hubs and windscreen wiper motors. I had brought the bulkhead of the ‘61 Series IIA pickup to Dewey Olson in Weston for welding and certain panel replacements. The selection of replacement pieces available right now at Rovers North is amazing. It makes the job that much easier when all the parts are easily obtained.

Lastly, I’m focused on helping John Vallerand with the organization of his upcoming “Maine Misfits… and Rover Bits” event, which will take place in Greene, ME, as we go to press this August. Rarely has an event been better named – I can’t wait to share this event with you in the next issue!