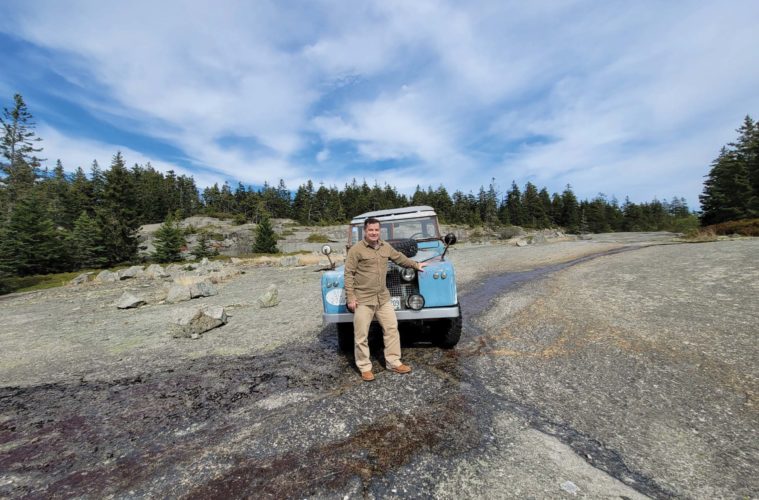 Behind the Steering Wheel – Holiday 2022

When the QE I, my ’66 Series IIA 88” SW, and I moved to the island of Vinalhaven, ME, 31 years ago, friends and family assumed I’d gone off the deep end (based on my prior decisions, a painful if comprehendible conclusion). “How long is the ferry ride?” “What do you mean, no ferries at night?” “What on earth do you do there?”

Locals wondered exactly what I might have done to wind up here. “Everyone has a hidden story,” one wife said inquisitively. Her husband, who runs the island’s boatyard, saw my Land Rover and could barely contain his guffaws when he insisted, “I have the perfect bumper sticker for you. ‘My other car is a piece of s*** too.’” Nevertheless, the island suits me well. I consider it a Vermont town surrounded by an ocean.

Vinalhaven’s considerable charm has lured Rovers North’s Mark and Andrea Letorney, along with their dogs, to visit. The magazine’s Creative Director, Thompson Smith, and his family chowed down a lobster dinner here during a Maine vacation. Bruce Fowler has attributed the creation of the Maine Winter Romp to a group visit decades ago. Other enthusiasts have graced me with their visits over the years. Indeed, the connection between Land Rover enthusiasts, whether virtual or in person, forms a powerful bond. Living on an island means that, most of the time, my Land Rover friendships remain virtual, but this summer proved different.

You cannot be a Land Rover enthusiast without applauding the amazing photography and writing of Nick Dimbleby. He’s constantly traveling the world on behalf of Jaguar Land Rover. His talent has chronicled every model in photos as a well as print; most recently, he used the Covid-19 isolation to create the definitive history of the Camel Trophy [See Holiday 2021 issue -ed]. Our paths have crossed at Land Rover Global Media events, and Nick has generously contributed photographs to Rovers Magazine. When he wrote that his family’s vacation travel plans for August centered on New England, I invited them to visit the island. Nick’s North American counterparts in the ‘90’s were Alan and Sally Seymour, who keeps a boat in Maine [See Summer/Fall 2020 issue -ed]. Happily, they transported the Dimbleby clan (Lisa and children Oscar and Pippa) on this recent visit.

JLR gave Nick the courtesy of a Defender 110 during his sojourn in New England, so my 109” (“It straddles the line between ‘patina’ and ‘tatty’ ”) threatened to inject Land Rover living into what was to be a “Land Rover-free zone” vacation. In case Nick’s Gen Z kids wondered about the reasons behind the new Defender, the ride in “Rickman” down our frost-heaved roads answered their questions. We toured our local lighthouse and Oscar showed off his considerable diving chops at one of our quarries. Nick sent a gracious thank you; “We had an amazing trip to New England, made all the better by our fantastic day in Vinalhaven. During our flight home [to the UK] we flew over the island and gave you a wave!”

If you’re a member of Texas Rovers or an attendee at SCARR, then you’ve met Joey Pitts. The off-road driving instructor and SCARR Trail Leader also work for the family trucking company; that connection led him to meet Blake and Diana Aslin. These two Houston-area residents left the sprawl behind to become liveaboards on their sailboat, a 38-ft Erickson named Josephine. When they told Joey that their itinerary would include Maine’s Penobscot Bay, he told them, “I know someone who lives on an island there.” Texts flew back and forth and one September morning, I found myself sitting in my 109” at a landing, waiting for a skiff to arrive with two passengers.

With me in the 109” sat Jenny Mays, a St. Louis resident who chose to spend the last days of her year-long sabbatical from work touring the country. Somehow, her quick stop in Maine included two days on the island. She’d never ridden in a Land Rover but she accepted the invitation to ride with me and meet the boat people, figuring it would be another adventure.

Similarly, Blake and Diana had left their professional lives behind, sold their land-based possessions and bought Josephine a few years ago. Their 2022 plans called for them to spend the summer in New England and the northeast coast, wait out the hurricane season then head to the Caribbean for the winter. Contrasting that with my winter plans, which call for tossing many cords of wood into my woodstove and shoveling vast quantities of snow, my envy rose considerably.

Tanned, fit, and exceedingly chuffed from their boat life, their good cheer annoyed me as much as Cindy Lou Who aggravated the Grinch. Why had I chosen a life of endless toil with four jobs, three Land Rovers, and two Triumphs requiring as much attention and maintenance as young children? It took only moments for my grumpiness to melt as their joy over seeing my 109” SW spread over me. It transported us to a lighthouse sitting on a bluff overlooking the entrance to a wide channel called “The Thorofare.” Next, we stopped at the island’s grocery store where they stocked up on fresh fruits and vegetables. We toured abandoned quarries, swimming holes and a couple of scenic beaches.

Diana summed up the day: “Today was my first day in a Land Rover; a light blue 1967 Land Rover Station Wagon with an antique designation on the license plate. The interior smelled like my stepdad’s old red Chevy; a mix of worn vinyl tinged with aging metal. We bumped and bounced our way through the narrow, winding roads of Vinalhaven, Maine with windows sliding open and the breeze from the rooftop vents whispering through my hair. In the first jolt of a wheel meeting pothole, I bounced about six inches off my seat, instantly grateful for the high-support sports bra I was wearing. The tumultuous motion of the ride was matched with intermittent clanking and clunking with an undertone of a deep, continuous hum from the vibration of rubber meeting the asphalt. The sounds muffled the voices in the front seat. In between Jeff pointing out sights, I got to know Jenny, a solo traveler. Maybe it was the familiar smells or the kindred spirits around me, but in the chaos of motion and sound, I found a sense of belonging in the backseat of an old Land Rover.”

OK, so maybe I should hose out the interior, install new leaf springs and door seals, and secure the shovel, tools, jack handle, and crank better.

Rob Williams, Dubuque, IA, works as an engineer for John Deere, helping design Transformers-size equipment. On a trip to a family reunion in Maine a few years ago, he went home via Vermont and took a side trip to Rovers North.

Last September, Rob sent me a message introducing himself as a Rovers Magazine reader flying into Portland, ME, for another family reunion. “Being from Iowa, Series Land Rovers are on the rare side,” he wrote. “Would you happen to know anyone around Oxford, ME, who may be up for a pint and Rover talk? I hope to get the opportunity to meet with some folks,” he continued. “I bought my Series III in 2005 while in grad school (because evidently, I thought I had plenty of time and money). I finally started restoring it 3.5 years ago. I’ve still not actually driven a Land Rover.”

I posted his request on the Downeast Land Rover Club’s Facebook page; which resulted in an ‘enjoyable time” with Andrew Pratt of Expanse Outfitters in Scarborough. Rob also accepted an invitation to visit me on the island, which enabled me to give him a ride in a Series Land Rover. He lucked out with a sunny, calm 1.5-hour ferry ride; I pretended that the unusually nice weather was the norm. We immediately headed for lunch at the award-winning “Greet’s Eats” (Best Lobster Roll category). Having visitors as guests force me to actually travel the short distances to the locales that make the place so appealing to tourists.

I listened as Rob described his family’s connection with Maine as well his personal history with his Land Rover. We swapped tales of his high school teaching experiences and his life on his family farm. He has given substantial time to volunteer activities to benefit his “small city.” (Its population matches that of Portland, Maine’s largest, and vastly exceeds that of Burlington, Vermont’s largest.) I’m fairly confident that the ride in my Series Rover gave Rob the impetus to finish up his Series III so it would be in better condition than his island ride!

These visits by enthusiasts confirm the remarkable range of people who embrace Land Rovers as central – but not exclusive – to their lives. Whether through photography and writing, visiting and friendship, volunteering and reconnecting, let your Land Rover remain a part of your adventures – and please share them with us.

To everyone who reads this magazine, here’s a heartfelt wish for a meaningful and engaging Holiday season!