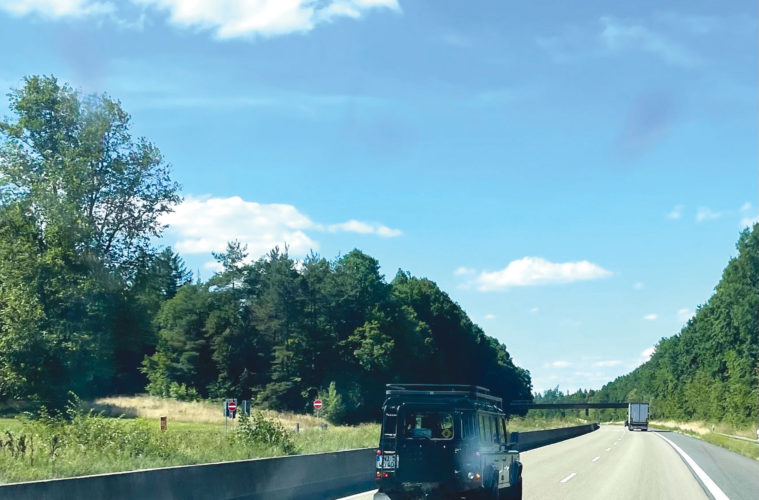 Outside of my friends and family, I have two main interests in life: vintage Land Rovers and rock music. The two don’t mix very often, if at all – but when they do, I’m ecstatic. (Besides, if Jeff Aronson can create an excuse to feature his Triumph TR7 in his column, I can put my rock band in mine!)

I play in Witch, a ‘70s-inspired hard rock band. The band formed in 2005, has several releases and has toured in both North America and Europe. After two consecutive years of cancellations due to Covid-19 restrictions, we finally commenced our three-week, six-nation European tour this August.

Like any Land Rover enthusiast, I constantly looked out for Rovers along the way, albeit sometimes subconsciously. We traveled in a Mercedes Sprinter with a trailer in tow, which we rented from Nomads of Prague, a touring company based in the Czech Republic. I spent many long hours riding shotgun next to our Prague-based tour manager, Jara Spring. Any time a Land Rover passed us on the highway, I immediately perked up and yelled, “ ‘90” or “110”. Eventually, Jara started doing it, tapping me on the arm whilst staring into the side mirror of the Mercedes, shouting, “Look, look, look, awesome 110 coming up on the left.”

After about two weeks of this game, during which we spotted at least thirty Defenders along the way, Jara couldn’t stop talking about Land Rovers. He’s a surfer and travels by air to surf destinations around the world, including European ones. The Defender 110 appealed to him for its functionality, ability to carry boards on the roof, and capability as a camper. Every morning at breakfast, he eagerly showed me the Defenders he had found the night before on various used vehicle websites. By the time the tour ended, he was converted and headed home intent on buying a 110. As we go to press, he’s on the road again managing a bus tour and frequently sending me photos of Land Rovers along his route.

The second-to-last show of our tour took place at Sonic Blast, a weekend-long festival in Moledo, Portugal. Every August, several thousand music fans from all over the world descend upon the small beach town, located about an hour north of Porto. After we played our set, the band and I set off to see the beach at night, only 100 yards from the stage. As we exited the main gate of the festival grounds, I spotted a green late-80s Defender 90 with the words ‘Guarda Nacional Republicana’ emblazoned on the rear section of the roof. I ran up to the truck and started taking photos, until a large man in a military uniform, holding a machine gun, walked over to me and started speaking Portuguese in a shrill, forceful manner. Like in my previous Italian military Land Rover encounter [see Summer/Fall 2022 issue -ed],

I forgot that these trucks are being used in a “work” capacity, and their drivers, aka soldiers, are there to do a job. My first thought was to ask him if he knows of an auction house where the retired Land Rovers are sold off, but he just kept yelling at me. Finally, a nice Portuguese festival attendee who had been watching this encounter came over to me and told me that I should get away from the vehicle. I had him translate to the soldier that I only had an interest in Land Rovers and assured him that I was not a threat to national security. I pulled up photos on my phone to show him Land Rovers being used in the woods of Vermont and it finally clicked to him that I was just nerding out over his nicely-aged Defender. He told the translator that he didn’t quite understand why I’d be interested in that old truck, but “to each his own.”

Days later, the next show took place high in the Swiss Alps at a festival called Palp. We flew into Geneva and were driven to the town of Verbier. From there, we went to the next valley over and up a very steep road to the festival area, at 6,000 feet altitude. We rode in awe of the views across the Alps as we weaved back and forth up a series of switchbacks. The festival employee driving our van took each turn with conviction, making us cringe on every hairpin where we could see the drop-off below. We finally relaxed once we reached the pinnacle with its rolling hill plateau interspersed with tall evergreen trees. Our festival handler greeted us with a Raclette, a traditional Swiss dish. (Raclette is a wheel of special Swiss cheese, whose melted portions rest on a plate, served with a boiled potato and beer.

As I walked away holding my plate, I spotted a mid-2000s Defender 90 set up as if intended for camping with an extended roof tent. I walked back to the handler and asked who owned the D90. She informed me that Blaise Coutaz, the founder of Palp, owned the Defender. We hit it off over our interests in both rock music and Land Rovers. Blaise uses his Defender as a daily driver and, like most owners who use their trucks all year round, is in a constant rotation of repairs and maintenance. He pointed out the recent fixes and the upcoming work, slightly crusty outriggers, and a rear cross member. He installed the roof tent several years ago because he appreciates the spontaneity of heading off on weekends to random locations throughout the French region of the Swiss Alps. The D90 enables him to be self-sufficient and camp at one of the many vistas designated for such activity. I had one Vermont Rovers sticker in my guitar case, which he quickly stuck onto the back of his truck.

Although I often go off-roading on weekends with the Vermont Rover Club around New England, I didn’t expect to find a fellow enthusiast in the Swiss Alps who shared my two passions. I made a tentative plan to go back to Switzerland next year to see more of the Alps, not just as a musician, but as a Land Rover enthusiast.