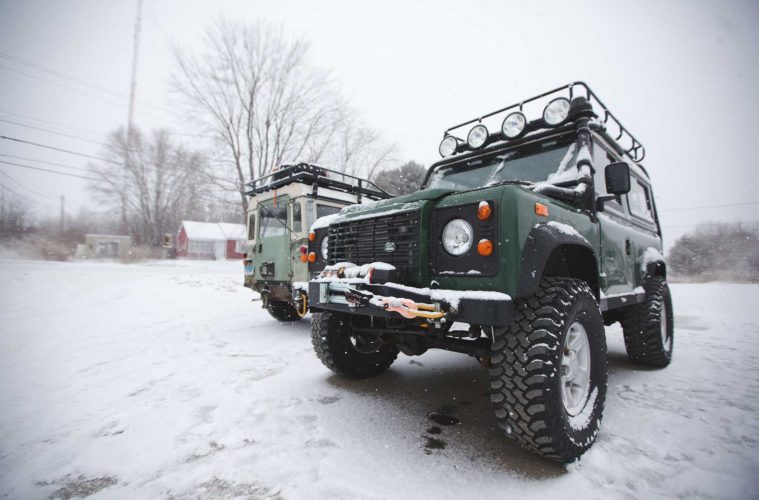 By age 20, your parents began to nag even louder that you should stop behaving like a teenager, take responsibility for your future. You should become more focused, less idealistic, more realistic—you know, mature.

Well, the Maine Winter Romp turned 20 this year and it hasn’t grown up yet. Good thing, too, for it remains wicked good fun—in a sort of Ferris Bueller way. All the things that mature events do, like require advance registration, charge fees for necessities like insurance, tech inspections, start and finish times, don’t happen at the Maine Winter Romp. The two predictable aspects include the date, Presidents’ Day Weekend in February, and the cold temperatures. The rest is unpredictable.

“WARNING-Obstacles May Be Hidden With Snow”

You might well find the trails packed with snow during the day, but frozen over with an icy coating as if someone had run a Zamboni over them. Or you might find 2-3 feet on wet, unpacked snow that will stop you cold if you lose momentum and your Land Rover’s frame rides up on the top of the snowpack. You might find your Land Rover sinking into a hole covered under the 2-3 feet of desiccated, powdery snow. Whatever the snow conditions, they will hide various stumps, rocks and even boulders that will fetch up your differential. Frozen trails will melt under the heat of dozens of Land Rovers traversing them and then you can test your door seals in the icy waters. It’s likely that you will also spend a lot of time tromping through thigh-deep snow searching out the right tree to use as a recovery point. One year, the conditions permitted us to enjoy a leisurely lunch in a sunny snowfield; during another eighty-seven Land Rovers drove to a group of snowmobile camps with a blazing bonfire. Then there was the year we missed lunch and dinner because we didn’t exit the woods until 3:00 the following morning. Like I said, unpredictable.

The Romp takes place in a very free-spirited part of Maine. Before the poultry raising and processing industry moved south, Waldo County [yes, that’s its real name —ed.] was chicken country; many huge poultry barns still dot the landscape. As industry departed, farmland prices fell and a back-to-the-land movement brought in new residents. The newly founded Unity College added to the influx, which included Bruce Fowler. As a radio transmission engineer, he found himself working with the college radio station, as well as repairing transmitters located on remote mountaintops. What better way to get there in all weathers than a Series Land Rover? Bruce bought himself an old house and established himself in the community.

Bruce’s Land Rovers attracted the attention of other enthusiasts. “Since 1986, a group of Unity College students would play in the woods every Presidents’ Day weekend. Rush Hambleton [then a student at nearby Colby College —ed.] really came up with the idea to open the trails to the larger Land Rover world. In late 1995, Rush, Scott Herron and I visited you on Vinalhaven and asked if you thought an event would be a good idea, and if it could be mentioned in the then Rovers North News. We also spread the word through the Land Rover Owners email list and club contacts.” The first Maine Winter Romp followed in 1996.

Twenty years ago, the entry list featured 14 Land Rovers: 11 Series Land Rovers, 2 Range Rovers and 1 Discovery. They came from Maine, Massachusetts, New Hampshire, New York, Indiana and Nova Scotia. Some camped in the woods, others crashed at Bruce’s house, stayed at a local B&B or at a motel in nearby Waterville. Bruce hosted breakfast at his house, or you went to Penny’s Pit Stop near the Unity Raceway. You brought lunch with you and the evening meal was at the Unity College cafeteria. Maybe there were 20 people. We had a very good time.

Early on the event established a “Romp Attitude Statement,” which said clearly that you’re in Maine, in winter, and in the woods. No one can predict the condition of the weather or the trails, no one should complain about those conditions, and no one will listen to any complaints. “Off-roading is a team effort, but you are responsible for yourself, your well-being and your happiness… Did we mention, ‘No Whining?’” (This remains so embedded in the Romp that the text appears in full on the 2016 commemorative t-shirt.)

The event grew rapidly, especially with the participation of the Ottawa Valley Land Rover Club members who attend to this day. For over two decades, enthusiasts have also travelled from as far away as Great Britain, Alaska, California, Tennessee, Virginia, Ohio, Pennsylvania, New York, New Brunswick, Quebec, Ottawa, and all the New England states.

John Vallerand and his home-built track Discovery I

This year Bruce welcomed nearly 100 Land Rovers, ranging from a Series I, through a passel of Defenders, and into barely used Range Rovers. Some had extreme modifications for off road use, others looked quite stock. While the Land Rovers fueled up at area stores, the owners piled in the gargantuan breakfasts and lunch sandwiches at the epic diner, Big G’s. The weather held to its wintry norm, resulting in a few older diesels proving reluctant to start. Adding to the joy was a light snowfall that continued much of the day.

The trails proved as challenging as ever. While the overall snow cover was much less than last year’s bumper-high snowpack, it proved deep enough to hide obstacles, such as rocks and stumps that were taxing on some runs. Reports filtered in of field repairs, such as those of John Greenhalgh, a relative newcomer to Land Rovers whose Discovery I suffered a broken front hub out in the woods. While he undertook the repair in the snow and undoubtedly felt miserable, he successfully replaced the part and continued on his way. At least John’s repairs occurred during daylight hours; other breakdowns took place during the night runs.

Bruce didn’t hold an Alumni Mixer for this 20th anniversary, but it was wonderful to join two other original attendees, Eric Zipkin [this time with family in tow] and Jeff Meyer, both of New York. Dixon Kenner of Ottawa, a long-time member of the Ottawa Valley Land Rover Club who has attended virtually every year’s Romp, shook his head and marveled, “This event still has the same spirit as when it began. You just show up at Bruce’s house in the middle of February and hit the trails. You never know the conditions in advance. It’s just amazing.”