[Joey Boerner, Forest Grove, OR, works in technology, but remains a musician at heart. With his wife and four children, they enjoy life with their ’97 Discovery XD. We enjoyed his article a decade ago on their Range Rover Classic — here’s his appreciation of this special edition Discovery -ed.]

Driving around in a 1997 Discovery XD, I’m used to getting all kinds of comments about its unique appearance. Some love it; some aren’t certain what to make of it.

“Are you entering some kind of off-road race?” Maybe, someday…

“Your American flag is backwards.” I noticed that too, but I’m not sure why…

“You should be getting sponsorship money from Land Rover!” I wish…

I appreciate my AA Yellow XD beyond its kit and color scheme. Over the past six years of ownership I’ve researched the history of this limited edition [one of many created by Land Rover over the decades -ed.], collecting images, videos, articles and dealer literature. Most factory publicity from 1997 excludes the XD as a trim package. 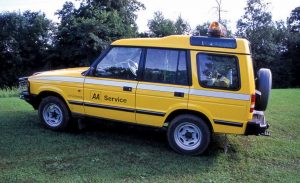 2017 marks the 20th anniversary of the XD. To celebrate, I contacted Bob Burns, Special Events Manager for Land Rover North America, Nick Dimbleby, photographer and author for Land Rover UK, and Moses Ludel, off-road instructor, all part of the original launch of the XD.

Bashful people should not drive a bright yellow vehicle. A few years ago, my father and I drove my XD to retrieve a parts Land Rover and stopped to help a stranded driver. His pickup had run out of gas. He jumped in to the Disco and asked, “Are you from roadside assistance or something?” Good question! Land Rover took the color scheme long used by the UK’s Automobile Association’s roadside assistance Series I’s for the then-new ’94 NAS Defender. 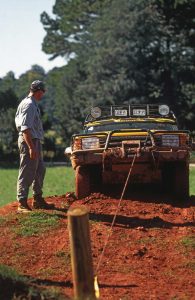 Land Rover North America never had the media budget of larger manufacturers to promote their vehicles, but they gave free reign to very inventive staffers to create special events to draw attention to the marque and expand their US market share. The worldwide Camel Trophy events began their decline as environmental concerns diminished their popularity. LRNA created the “TReK ’96,” which called upon dealer-sponsored teams to, as Bob Burns remembered, “Test employees’ mettle, ability to work as part of a team, and Land Rover vehicle knowledge.” LRNA sent a video to each dealership with instructions for applying to compete in TReK ’96, as well as winching tips and an overview of the Defender 90 — curiously, not of a Discovery. 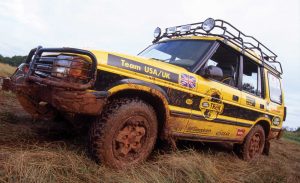 What’s in a name? Bob Burns recalls, “I pushed hard for the XD name as we were launching what is widely now known as a ‘Wolf’ military-spec Defender at that time and the production name for Wolf vehicles was actually ‘XD’. I wanted a parallel to the Defender on these Discoverys.” What does XD stand for? Extra Duty or Extreme Duty?  “Sure,” Burns wrote me, “Whatever you like. I’ve heard both as well. I think it’s more likely that they are two letters that sound cool together much like LSE or HSE. Who doesn’t want a car with an X in the name?” It was the ’90s after all. 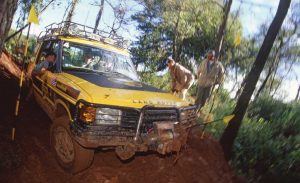 In September 1996, five dealership teams, representing each sales region, and six teams from the automotive media met in Atlanta, GA, on private property specially prepared for the event. It also served as a media event to promote the Land Rover brand, including a special on ESPN2. Land Rover North Point [GA], in Discovery #4, won the dealership contest, and FOUR WHEELER, in Discovery #6, took top honors in the media competition. Nick Dimbleby and Moses Ludel formed one US/UK media team. Moses fondly remembers the event as both a great off-road challenge and bonding experience between participants, and he still proudly displays his third-place trophy in his office.

After TReK, several of the trucks served as Camel Trophy training rigs. Camel Trophy logos replaced the TReK ’96 logos, contributing to the confusion among Land Rover enthusiasts, but adding to the cool factor of these trucks, as well as a great window into the world of Land Rover in the late 1990s. 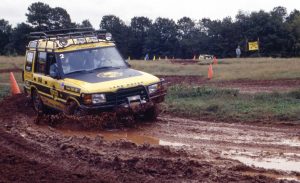 In February 1997, the Discovery Channel covered the “Eco-Challenge Adventure Race.” Land Rover provided 28 pre-production XDs for the event that took place in British Columbia from August 24-September 1, 1996. These versions of the XD differ slightly from the production vehicles, as they still had the standard roof bars, high SD roof rack, and no badge in the engine bay. From the press release, “The four-wheel drive vehicles shadowed the teams as they ran, canoed, mountaineered and bicycled the incredible coastal mountains, ice fields and rivers of British Columbia. Often, the rugged Land Rovers recovered teams too exhausted to continue.” These trucks usually feature the Eco-Challenge logo on the hood and doors, but it’s often faded due to age. These are great additions to the XD history, and are very hard to track down. Charles R. Hughes, then President of Land Rover North America, said, “The XD used to support the Eco-Challenge embodies the true spirit and heritage of Land Rover as being the most capable in virtually any off-road situation. Their abilities have been proven time and again in sagas of exploration and humanitarian efforts.” 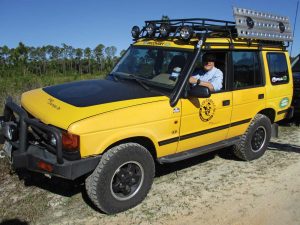 While the event made for great television, thanks to typical reality show editing, it left a poor taste in some participants’ mouths. Vivian Lougheed, a photographer for the Team, detested the disregard for environmental concerns and the contrived “reality” narrative and confronted the producers — resulting in her ejection from the event.

For 1997, Land Rover North America ordered 250 Special Edition XD Discoverys from Special Vehicles Operations, specifically targeted for the “off-road enthusiast.” These were based on the standard Discovery SD, but influenced heavily by the TReK trucks; cloth interior, manual seats, no sunroofs, and the optional “Event Decal Package,” which matched very closely with the TReK event truck’s decals. There are a few tell-tale markers of the production XD; an automatic transmission, no factory roof bars, and most importantly, inside the engine bay, just to the left of the radiator is a riveted badge from LRSVO. Though many times the engraved number is thought to be an ID number (like the NAS Defenders), this is actually just an order number, and all XDs have the same number. The build date is unique, and they range from late 1996, to mid-1997. 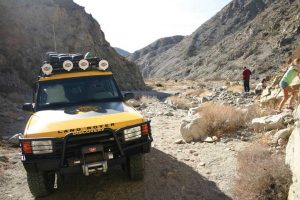 In addition to the standard features for a 1997 Land Rover Discovery, there were several items that were considered “Special XD Equipment.” From the hard-to-find dealer brochure: 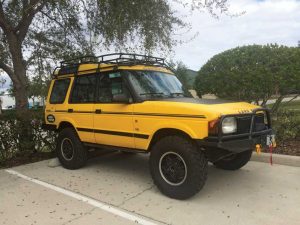 While it’s almost impossible to know how many of the original 250 are left (sadly, I know at least one was lost to the “Cash-for-Clunkers” program a few years back), the ones that remain seem to be finding homes with enthusiasts who fit the description found in the original marketing brochure. Whether outfitted for off-roading or overlanding, you won’t find two alike; heavy-duty bumpers, lift kits, snorkels, winches, and other aftermarket kit abound. There’s a growing community of XD fans coming together to keep these trucks on (and off) the road.

Between the TReK ’96 event, Eco-Challenge, and Special Edition XDs, it appears that fewer than 300 were produced, so if you want a yellow Disco you really only have a few options. Obviously, the production Special Edition XDs are the most common, but at 20-years-old, they’re becoming increasingly rare, especially in good condition. The Eco-Challenge trucks are out there, but often hard to distinguish from the production XDs (look for those roof bars!) The TReK event trucks are, of course, the rarest of the bunch, and deserve to be treated as a special part of Land Rover history. 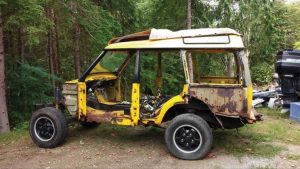 Chuck Prowse, Bothell, WA, is another Keeper of the Faith where Discovery XD’s are concerned. “I wanted an XD for the color, the off-road kit, the basic nature of it.”

“My draw to the Discovery 1 in general is its simplicity and honest design — a no-compromise utility truck with a modicum of comfort. The Discovery 1 does anything I want it to do. It still goes off-road better than any SUV out there. I like the design and its appearance. It’s also a great handler on the street — LR did the best engineering with solid axles. I have 300,000 on my ’98 SE, a one-owner truck from a service advisor friend.” 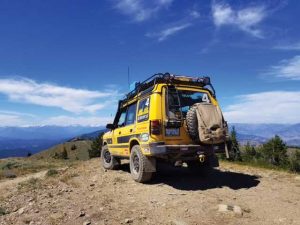 “I own Trek #6, a 5-speed ordered for the TReK event. It was well maintained and it drives great. The body was tired, however, so I embarked on a 5-year refurbishment of the vehicle.”

“I’ve driven Series Land Rovers and Defenders, and my wife drives an LR4 — it’s quite removed from the Discovery 1, which remains my favorite.”