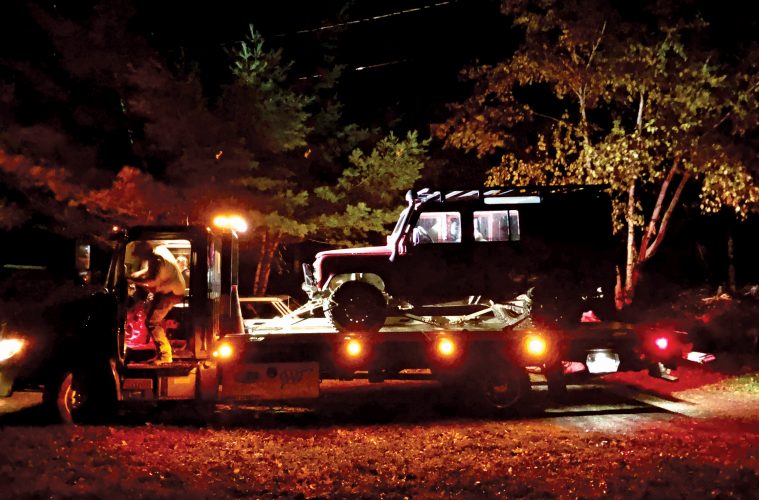 Behind the Steering Wheel: Winter 2018

Last October, Jack Criswell, Mobile, AL, and his family attended the Overland Expo East in their Defender 110. On the way home from the Asheville, NC site, the Defender shed its water pump belt. He recounted, “While my quick thinking averted a serious crisis, we were stranded on the side of the road, far from home. ‘At least the weather was nice,’ I lamely offered. To my wife and children, this simply confirmed the skepticism they’d held about the Land Rover. I called my mechanic, Mark Murphy in Cullman, AL, the ‘Einstein Defender Whisperer,’ who recognized the problem and offered to jump into his Land Rover to get us — 8 hours away!”

“Shortly afterwards, a Defender whisked passed us. ‘He didn’t even stop,’ a family member cried out. But several minutes later the guy rolled up behind us — he’d turned around two exits beyond us and driven all the way back to see if he could help. The Defender driver turned out to be Land Rover specialist Darryl Newcomb of Platinum Motors, Lagrange, KY. Darryl drove to the nearest town to secure the stupid belts that stupidly I should have packed as spares, plus some antifreeze to replace any that I lost. Then he waited after I started it up to make certain that it was running fine, and to see whether my cooling system hoses were fine. He refused any compensation.”

“Within minutes, a second Defender arrived, this one packing Winn Bearden of Warner Robins, GA. Winn, Darryl and I chatted about Defenders and how much we’ve relied on Rovers North over the years. It occurred to me that Rovers North has created this priceless network of timely and effective Minutemen — giving honor to them would be so appropriate.”

In November, correspondent Alaina Poole, Pinson, AL, came to the rescue of enthusiast Joshua Todd, Daphne, AL. He had been off-roading in the Talladega National Forest with a friend, Chad Bowles, when a rear shock absorber collapsed and created a serious driving problem. Joshua posted a request to the Gulf Coast Land Rover Club and a quick response came from a Land Rover buddy, Roman Ghabayen. Joshua noted, “Roman lives only an hour away and I’ve helped him with his Land Rovers over the years. I asked if he had an extra shock.” He laughed and said he had just given a set to his uncle, Anthony Poole, who operates Poole’s European and Vintage Auto in Odenville, AL. Even though he works by appointment only, when Joshua called, Anthony said, “If you can get to our shop we’ll take care of you.” Joshua recounted, “I had met Alaina and Anthony at the Sand Rover Rally and kept in touch with them on social media. I was four hours and 250 miles away from home; their assistance was just so convenient and just a blessing!” Alaina insisted “No charge” because it was “common interest in Land Rovers bringing good people together!” (Joshua would later tell me that only a week and half before, he had taken a day off work to rescue a stranded, Chicago-based Discovery II owner who needed a crank sensor.)

Around the same time, my phone rang at home. The caller was Tim Smith from Connecticut (named “The Rover Whisperer” by correspondent Rebekah Gleaves Sanderlin [see Fall 2012 issue -ed.]) A friend, Tom Boe-Wiegaard, S. Norwalk, CT, had driven his ’92 Defender 110 200 Tdi to Nova Scotia for its first extended trip. While on his way home, his fiancée, Justine Landegger, had requested that he check out possible wedding sites in Maine. Justine could not undertake this mission herself as she’s serving as a senior tech advisor for the International Rescue Committee in Uganda — so the task fell to Tom and his Defender.

As they sometimes do, the Defender had other plans and decided that early evening, three hours northeast of any large city, would be a great time and place for the alternator to die. In Tim’s words, “The time is 20:15, the headlights are dimming, wipers and defroster are slowing down, my face is getting ever closer to the windshield and I’m thinking, ‘I knew I should have installed that new alternator before I left.’ Then the lights of a service station beckoned just as the electric fuel pump ceased functioning and the 2.5 diesel joined the quiet of the night, leaving me only with the sound of rain on the roof.”

“In this cold, dark, desolate spot, a call to my best Rover mate, Tim Smith, seemed in order. With expectations of nothing more than consolation and emotional support, Tim said, “We’ve all been there, buddy. Let me make some calls and I’ll get back to you.”

That’s when Tim called me. Tim didn’t know Tom’s exact location in Maine, and did know that I lived on an island, but might I know someone who could help? I’d like to claim that I single-handedly rescued Tom’s Defender and was invited as the guest of honor at his wedding… but, no, actually not at all.

A call to Tom revealed that he had swapped out a battery and was driving at night [!] as he had to get to Connecticut on schedule. I made texts, calls and social media posts to enthusiasts and members of the Downeast Land Rover Club. Within 20 minutes I had offers of help from Terry Jackson in Lewiston, Sandy Cameron in Lincolnville, Doug Foster and Tim Weiss on Mt. Desert Island, John Cassidy in Bangor, Andrew Pratt in Portland, all of whom lived in towns near Tom and/or his anticipated route! As Tom recollected, “Suddenly out of the rainy night came offers of a place to stay only 45 minutes away (with beer in the fridge to sweeten the deal), a possible spare part in Portland, two enthusiasts willing to make a pickup if necessary, and the location of the best alternator repair shop on the planet.”

Range Rover Classic enthusiast Tim Weiss splits his time between Portland and Bar Harbor. Although he was 2.5 hours away from Bar Harbor that night, Tim provided instructions on the location of the spare key to his shop, described by Tom as “a magical place with a 1930’s Duchess Atlantic woodstove on which to cook dinner and obtain warmth, a comfortable bed and a full complement of tools. It was after midnight, a B.B. King vinyl on the turntable playing though a McIntosh C28 amplifier, a wood burning stove crackling the background and the poetic irony of reading a few pages of a 1970’s issue of Modern Astronomy was not lost on me. He entrusted all this to a complete stranger and newcomer to the Land Rover network. It inspired a feeling of humble gratitude for such hospitality and camaraderie.”

Tom charged up his battery overnight, but also took the charger and extension cord with him to breakfast at Common Joe’s in Bar Harbor (the irony of the Tesla-like charging session was not lost on him). As recommended by both Tim Weiss and Doug Foster, Tom headed to Bonded Auto Parts in Ellsworth in high hopes that Charlie Freeman could repair his alternator.

Someone had greased his path to Bonded Auto as Tom remembers being greeted by, “You must be the Norwegian guy with the dead alternator [Tom was born in Norway -ed.] Clearly word travels faster than a 200 Tdi in Maine.” Upon visual inspection of the Magnetti Merrili alternator, Charlie lowered expectations as he doubted he had any parts for that brand. Upon disassembly, however, Charlie identified a blown positive diode as the culprit and a new Lucas regulator pack as the solution. Tom noted, “After 30 minutes of sandblasting, installing new bearings, freshly insulated windings, the restored alternator was putting out 50 amps! I also enjoyed a tour of the shop and a viewing of his impressive model train collection. In an age of diminishing machine skills, Charlie provided a beacon of hope.”

“In 14 hours, I had been warmed by the Duchess [stove], conquered a failed diode, met a fantastic group of enthusiasts, and was on my way home with all systems go. I had experienced first-hand the amazing reach and capacity of the Land Rover community to share skills, experience, knowledge, hospitality with other Land Rover enthusiasts, wherever our adventures might take us.”

Mark Letorney remembers traveling out west a long time ago when he came across a Series II-A on the side of the road. The Rovers North enthusiast was stunned to discover that his roadside mechanic was Rovers North’s founder. When a third Land Rover pulled over to offer assistance, that enthusiast exclaimed that he, too, relied on Rovers North.

I’m quite confident that many readers have assisted other enthusiasts or benefitted from the knowledge, skills, and camaraderie of other enthusiasts. Join the Rovers North Rescue League today by sharing your stories with other readers. We have a special prize for you in return!