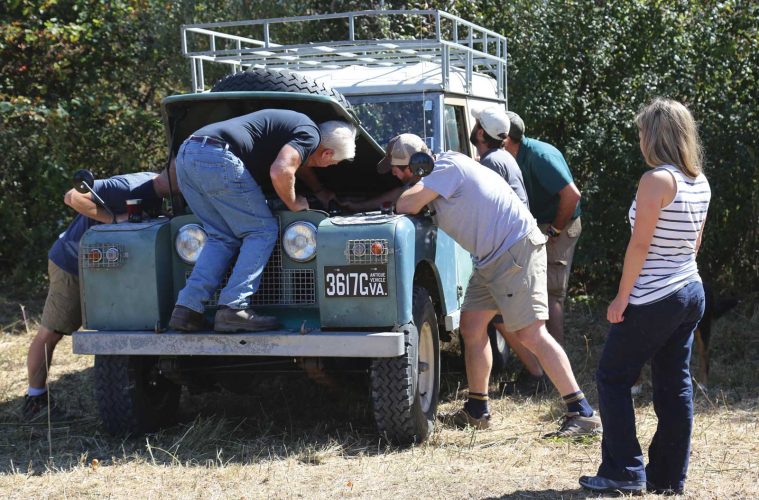 Our Rover Rescue stories for this issue come from the West Coast and East Coast, one recent and one from decades ago.

When we heard of Robbie Booth’s rescue, we tracked him down for a phone interview. He lives in Woodinville, WA, in the state’s wine country, with his wife, Jennifer and sons Bodhi (6) and Ronan (3). He calls the family “horse and classic car people,” which makes sense as he hails from Dunfermline, Scotland. He came to the US to work for Microsoft, leading an IT team in artificial intelligence.

This past Christmas Eve, Robbie and his family traveled home on a delayed flight from Florida to Seattle. Given the holiday, the late hour, and slick snow-covered ground, he became concerned that the usual Uber car might be unable to navigate the steep hills in his town. His brother, Paul Booth, has a 2012 Evoque; Robbie called him away from his Christmas Party and requested his help getting home from the airport. 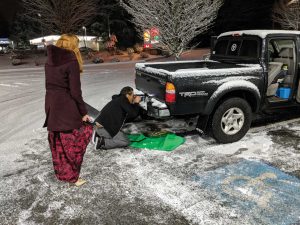 Robbie recounted, “Once we got into our town I realized just how well the Evoque handled the snow and ice. It’s really late, cold and snowy. As we got close to our house we saw an Uber car had slid into a ditch. Paul drops us off and heads back to his house. Meanwhile, I put my recovery gear into my ’97 Discovery 1 SD 5-speed, and head out to help. The car came out of the ditch easily.”

“I pulled into a gas station and spot a woman in a ball gown standing beside her Toyota Tacoma pickup. It’s her first Christmas alone after a separation, she’s stranded, and her daughter is waiting for her to arrive home. I offered to help and pulled out the Discovery’s bottle jack. Sadly, it took 90 minutes to change out a tire because the lug nuts were corroded in place. While lying on the cold wet ground, I do remember seeing just how tiny the Tacoma’s leaf springs looked. 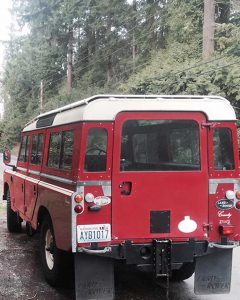 “Now it’s well after midnight on Christmas Day, and as I head home, I find the icy conditions have caused more cars to run off the road. I pulled a few out with my Discovery and got home around 3:00 am. The only good thing was that I got out of Christmas gift wrapping. I got one hour’s sleep before the kids decided to see if Santa Claus had arrived.”

“You know, the Discovery 1 was the pinnacle of what a manual system could do, and the Evoque demonstrating it’s the current pinnacle. Paul’s Evoque was so much better with just all-season tires than my Discovery. I could feel my Discovery sliding about while Paul’s looked steady. His really has a superior system.”

“The D1 is not our only Land Rover. We also have an ’83 Series III County Station Wagon 12- seater. Jennifer has a 2012 LR4. She loves it and it’s a far more modern car. My daily driver is my ’04 Discovery II, all kitted-out. Nevertheless, her LR4 will perform better in sand with just all-season tires than my Discovery II! The modern systems are truly remarkable.”

Long-time reader Jeffrey Sasso, Killingworth, CT, works with at-risk adolescents as a science teacher. Along with his college friend, Scott Preston, Hendersonville, TN, the director of an AMC camp in Bar Harbor, ME, they recounted one of their Rover Rescues.

Jeff — “In the early ’90s, my college buddy, Scott Preston, introduced me to the Land Rover world by asking me to attend the Downeast Rally in Lincolnville, Maine. This meant that I would meet Scott at his house in East Sandwich, on Cape Cod, MA, and drive with him in his ’69 Series II-A, with his newly acquired boxer pup, Cayenne, in my lap. I had zero experience with Land Rovers at the time, but I was inspired to spend a long drive from Massachusetts to Maine with a good friend and his new companion. It seemed like an epic adventure for a weekend, and so we set off.”

“Seven hours and many food and gas stops later, we arrived at the Duck Trap Campground and set up our tents. I enjoyed being among other enthusiasts camping, eating and drinking, telling Land Rover stories and, of course, off-road adventures tales. I had some off-road driving experience in other 4×4’s, but I was really impressed by the Series 88’s and 109’s negotiating the woods and rough terrain. On the rally’s final day, everyone drove the short distance to the Owls Head Transportation Museum where we displayed our Land Rovers at a vintage aircraft show. “

“We left the airport, tired, dirty but renewed, and set sights towards the southwest. Back onto the two-lane roads, we settled in for a loud and steady 55-60 mph drive back to Massachusetts. Somewhere in Maine, we noticed a blue 109” station wagon on the side of the road with the hood up. Naturally It was our duty to stop and see how we might assist these stranded owners. We discovered two passengers and a grey dog, sitting by the side of the road. The female driver stated the brakes gave way.”

Scott — “I noticed the master cylinder had no brake fluid, and indeed the brake pedal went straight to the floor. Jeff crawled under the vehicle and saw that the brake line to the right rear wheel was knackered; it leaked and drained all the fluid out of the system. 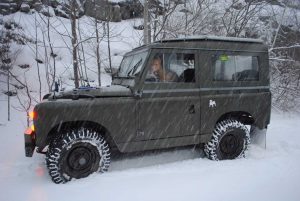 “I asked the owner if she had any tools on board. She pointed to a crescent wrench and a quart of oil. Her partner said, ‘I knew I should have installed that replacement brake line before we left!’”

“We were only there a short time when Land Rover after Land Rover stopped by to see if they could help us. It remains one of my most moving weekends. No one drove by, everyone stopped. Everyone wanted to help. She bought us fuel and food. He. An FBI agent, gave me a card and said, “I hope you never have to call me!”

Jeff — “One rescuer had in a Range Rover Classic had a suitable brake pipe and fitting we could adapt. Scott and I removed the bent and leaking pipe, fitted the new one, and then filling the system, proceeded to bleed the line till the brake pedal felt firm. The owners, who had travelled from Virginia to Maine, were elated and thankful for the help of everyone else who contributed. We followed their Virginia-bound Rover to a gas stop, where they generously filled our tank. We shared food and a photo, and we both set back in our trucks for home.” 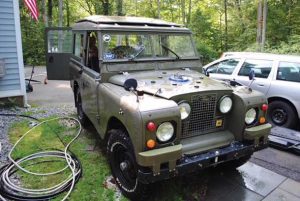 This experience launched Jeff into a Land Rover life. He bought a Defender 90 and drove it for a decade while he refurbished an ex-MoD Series II-A 88”, starting with a frame from Rovers North and tons of “good advice and encouragement.” “Cedryck” the II-A, conveys Jeff and his two Staffordshire Terriers, Stanislav and Frank, all over Connecticut.
[If you have a Rover Rescue story to share, please send it to me, jeff.aronson@roversnorth.com -ed.]