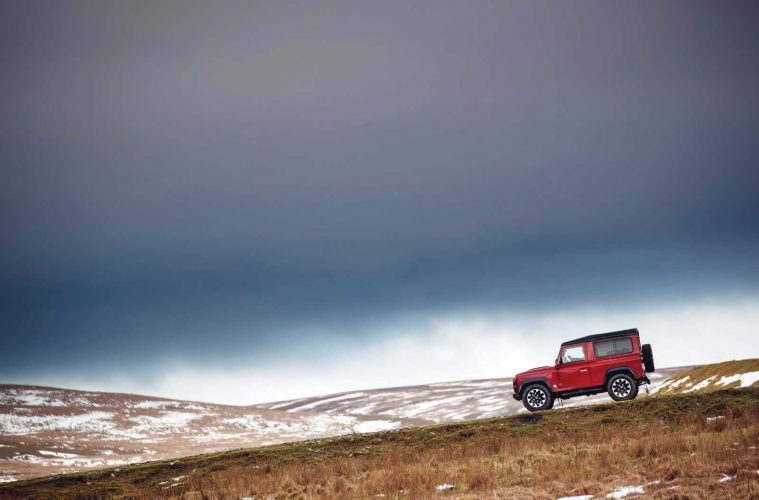 In the early ’90s, Ed Flynn, then the General Manager of Land Rover Scarborough (Maine) received a phone call from a potential customer. She loved the Land Rovers and Range Rovers she saw in the catalogue and wanted to order one. “Which one,” Ed asked? “The one on the first page,” she said. He looked at Page 1 and saw the photo of a Series II-A.

Yes, that’s the one she wanted to order new.

The appeal of the Land Rover Series and Defender continue in this 70th Anniversary year of the marque. Although Land Rover created the “Defender” nameplate in 1991, they’ve taken to referring to all Land Rovers since 1948 as “Defenders.”

Gather a group of Land Rover enthusiasts together, with or without liquor present, ask them what’s on their minds, and the subject of the upcoming Defender remains Bar Topic #1. We can be fairly certain that Land Rover will banish the harsh ride, letter-box size panel gaps, leaky tops, thirsty V-8’s, upright-only seating and narrow cockpits in favor of meeting contemporary fit, finish, economy and connectivity. It will likely have superior off-road capability and be more compliant on road — but will it look like a “proper” Land Rover? Will its styling remain both functional and iconic?

Simplicity fully realized becomes elegance; the rectangular lines of a Defender retain their air of elegance with a brilliant utility and a blessed absence of frippery. Do you think Steve Jobs first embodied this credo when he created the design brief for Apple? How about the Wilks brothers in 1948?

The creation of the Land Rover demanded simplicity in manufacturing and construction. With orders far exceeding Land Rover’s production capacity and competing demands on the small design team of the Rover Car Company, it took 10 years for a restyle. David Bache and his team took the primitive box with its slab sides, created the brilliant barrel roll of the fenders and doors, and added changes in proportions with sill plates to hide the frame and fuel tank and an increase in height. The introduction of the alpine window, intended to make the rear seat passengers feel less claustrophobic, became a hallmark of all Defenders (and Discoverys, too).

Back in 2012, when Land Rover dropped — and then quickly withdrew — the DC100 “design concept” on our laps, venerated auto journalist Dutch Mandel shared his thoughts with Rovers. “The Defender is a vehicle about which ‘lust’ is an insufficiently weak noun or verb; current and vintage Defenders elicit something beyond an emotive response. They are visceral. They are primal.” David E. Davis, writing in Car and Driver, called his Land Rover Series II-A “less a car than a state of mind…They have a style that elicits a studied carelessness.”

Sir Paul Smith, the fashion designer and retail entrepreneur, spoke about his love for his Defender in Land Rover’s One Life publication. “I love the practicality of this vehicle. It’s attracted everyone from farmers to the Forces. {Mine] reflects the honest history of the Defender. The car just works. So many cars now are full of modern technology, which a lot of people don’t ever really use. With the Defender, it just works. You work the lights with a switch. You pull up on the lever to work the emergency brake. And if you have a little bash of the corner and damage a light, there are two screws and you can take it off and put a new one on. I love it. It’s very British. Everyone else who’s tried to do similar things has rounded them off too much or put little pieces on them that are decorative rather than utilitarian”.

Simplicity enhances functionality, which in turn, evolves into elegance. Our collective response to seeing a Defender emerges from deep within us as enthusiasts, but it holds equal power over the general public, too. This magazine’s Sightings contest has run for decades, filled to the brim with evidence that filmmakers, advertisers, graphic designers, video producers and songwriters adore the lines of the Defender. It shows no sign of slowing down.

That’s why Stephen Ogletree, Adventure Motor Cars in Birmingham, AL, received a phone call this winter from photographer Marlon Krieger. His client, the apparel giant Ralph Lauren, sought to find the perfect vehicle to compliment a photo shoot, 400 miles away in Houma, LA. His choice? A very handsome Portofino Red ’97 NAS Defender 90 Station Wagon (not surprisingly, once returned to Birmingham, it quickly found a new home with an enthusiast in Wisconsin.)

Bo Prillaman, an artist and enthusiast in Vero Beach, FL, answered a request this year from his friend, Lange Sykes, the founder of Riomar footwear. Might he use Bo’s Series Land Rovers, a 67 Series II-A 88” named “Badger” and a late ’68 Series II-A 109” Bugeye named “Rooster,” for images on the Riomar website?

Asked why he requested a Series Rover, Lange replied, “As a Florida native, I’m a ‘water person,’ so I designed a shoe that’s functional on a deck, with a classic style and versatility. People think of these qualities when they see a Series Land Rover.”

“As the company’s Creative Director, I recognize that I have only a fleeting moment to make that point to a customer. I’m a huge admirer of the Series Land Rovers and Defenders. Together they connote the same qualities I want to associate with our shoes. A Land Rover’s presence helps deliver that message.”

“By the way, I’m very much in the market for a Series or Defender. I almost bought one the other day!”

Two years ago, the State of Maine’s Tourism Department launched a campaign on their VisitMaine.com website, one so successful that it won the 2017 Platinum Adrian Award for Travel Marketing over 1,300 entries. BVK in Milwaukee, WI, created the campaign and tasked Maine producer Rebecca Daigle to find the best locations and vehicles. Land Rover Scarborough offered her any new Land Rover model of choice. That’s not what the client wanted, so they drafted my ’66 Series II-A into service of the state. It must have helped; the interactive story featuring the Series II-A attracted over 87,000 hits.

Mitch Markussen, BVK’s Creative Director, said, “We wanted somethings that reflected the character, the patina of the state. Defenders stand out — I’m always pleased to see them here in Milwaukee. People buy Land Rovers not just because of their name, but even more because of their character implied by the design. I would say to Land Rover, ‘If it’s not broke, don’t fix it.’”

The storyline called for two sets of friends to make their first trips to Maine. Of the five actors chosen, Zack and Katie Kroko, Richmond, VA, won the chance to learn how to drive the II-A as Zack, at least, could drive a standard. We spent time together in low range while he acclimated himself to the lack of synchromesh between first and second. That gave lots of time for the creative teams and production teams to stage the storyline and make certain the II-A occupied a critical spot in every scene.

That same year G.H. Bass, the sportswear and footwear company headquartered in New York City, decided to bring camera crews, box trucks of clothing and equipment, advertising executives and models to Maine for their print and online media campaign. They chose Vinalhaven, the island where I live, and searched around for a “classic car or truck” for the shoot. I sent photos of the Series II-A; they stopped the search.

The two-day photo shoot took place in May and given my II-A’s daily work routine, I had just enough time to sweep out the remains of wood chips and clotted up dirt from the inside — while barely hosing off the outside. It didn’t matter.

A large cluster of videographers, photographers, make up artists, dressers, assistants, advertising executives, producers and a director descended on the island. Eric Wertz, the lifestyle writer/photographer of The Blue Collar Prep, and his family followed the shoot for their blog. Everyone was adamant that the Land Rover looked perfect. All its flaws became irrelevant as they photographed their products on their very talented models, Edda Petursdottir and Alexander Von Glasow. At times it felt like the II-A was the third model on the shoot. I was so chuffed that I agreed that they could drive it for a video (I must admit it looked great crossing the narrow wood and stone causeway.)

In Edda’s native Iceland, she’d become quite familiar with the sight and sound of Land Rovers. Alexander liked camping and exploring in his 80s Land Cruiser, but he fell quite hard for the visual impact, tactile vibrations and purposeful sounds of the II-A. Both models work internationally around a diverse group of automobiles; neither has forgotten their time in a Series II-A.

The impact of the iconic Land Rover design never fades, even if you replace it with an ’04 Discovery II.
Jamil Abassy, Natick, MA, is a dentist who decided in 2006 that he yearned for a Series Land Rover. He purchased a ’70 Series II-A that taught him about repairs: transmission, rear axle and interior. He openly admits to parking his motorcycle that summer. When a minivan ran into the II-A, Jamil remembers that the available left side replacement fender had the federally-required large directional — rendering it a few inches higher than its right-side counterpart.

Gone, but forgotten? Hardly — imagine his surprise when he recently received a Charles Tyrwhitt catalogue with a familiar red Series II-A on the cover. Ignoring the handsome shirts and ties he stared at the front-end view and lined up the directionals on the front fenders. No question about it — it was his former Series II-A.

Land Rover knows the new Defender must evoke the same emotions as its beloved predecessor. These creative people demonstrate to us that we’re not the only ones who know that you got it right, 70 years ago.