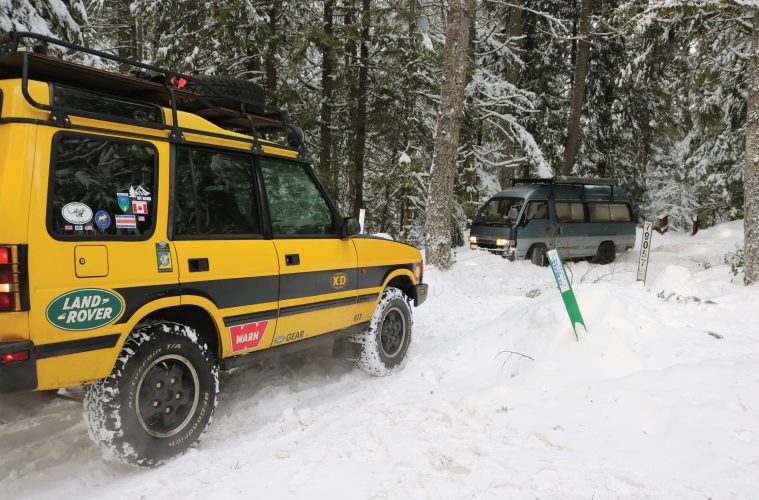 “Back in January 2017, my family and I decided to head to Mt. Hood to find some snow, so we loaded up all four kids in my Discovery XD. After several hours of sledding, fort building, and trying to avoid the bone-chilling wind, we got back in the Rover to start the 2-hour drive home. Unfortunately, we weren’t the only ones headed back towards the Portland area; the two-lane highway coming down the mountain quickly slowed to a crawl with the combination of snow and Subarus. As we made our slowly towards home, I knew it was going to be a long drive, but at least we were warm inside the Disco.” 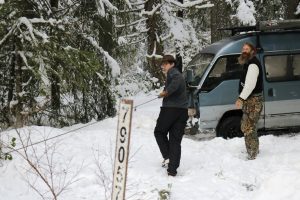 “About 30 minutes into the trip, I noticed someone sitting on the guardrail with a sign. I assumed he was looking for a ride, but soon it became apparent he was needing something more. As we approached, he jumped up, waved with excitement, and came running towards me. At first, I was a bit apprehensive, as my family started asking what he wanted, but my wife quickly observed that his sign read ‘Need Tow, Stuck!’ and suggested we hear him out. I rolled down the window and, looking at my Disco, he enthusiastically said “Man, if anyone can help me, it’s you!”

“He went on to explain, while we were still creeping along at 5 mph, that he had taken his van off on a forestry road to explore a bit and as he had attempted to turn around, the snow got too deep, and he had found himself stuck in about a foot of snow with no recovery gear other than a small shovel. I could see his van through the trees, so I knew he was telling the truth, and that it wouldn’t put me at too much risk for getting stuck myself. I glanced at my wife to make sure she was ok with it, and she looked at me with a look that seemed to say, ‘Of course you’re going to help, and you’re going to love it’.” 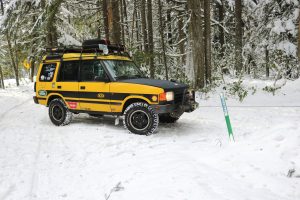 “We pulled off highway at the access road and found his van, a rare right-hand drive Nissan 4×4 Homy that he had recently purchased. The snow wasn’t too deep on the passenger side, but the driver’s side was well buried; the more he tried to get out, the deeper it slid into the trees. Fortunately, I had my recovery gear with me (I had almost left it at home to save interior space, but threw it on the roof rack, just in case), and had recently installed a Warn XD9000i winch. As we assessed the situation, and figured out a plan for recovery, he commented that he had seen me coming from long ways away (thanks to that AA Yellow!), and when he saw that I had a winch, he knew I was his ticket out. He had called for a tow, but being that it was late afternoon, the soonest they could get there was around 2 hours, and most likely wouldn’t make it out until the next day.” 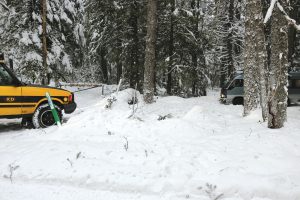 “Fortunately, he had a pre-installed recovery point on his front bumper, so I positioned my XD and hooked up the winch cable to his bumper. As I began to pull him towards me, his van crept closer to a tree, and since he still couldn’t get traction from his tires, we stopped, he did some more digging while I rearranged my Disco to get a bit more angle in the pull. As soon as his driver’s side wheel was free from the deeper snow, I was able to back him out and he was freed. He asked how he could repay me, but there wasn’t any need; just being able to play with my “toys” was payment enough. We put away the gear, loaded back up, and headed back out to the highway. The traffic was still just as congested, but the smile on my face lasted the entire drive home.”

“It just goes to show that even a normal drive in a Rover can turn into an adventure at a moment’s notice!”

[If you have a Rover Rescue story to share with readers, please send it to Jeff.Aronson@Roversnorth.com]