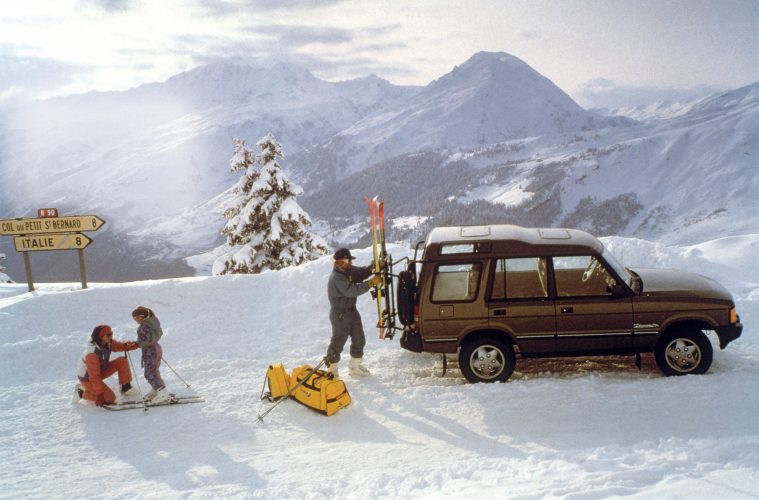 Turning 30 became a touchstone for Baby Boomers, who proclaimed, “Don’t trust anyone over 30!” as well as for Gen X’ers, who obsessed over their tribulations watching Thirtysomething. Happily, turning 30 has meant great things for the Discovery.

In 1988, Land Rover had just come under the new ownership of British Aerospace. The company produced two lines of vehicles: the Land Rover 90/110 and variants, and the Range Rover. Period. Inflation galloped along at nearly 8%, making everything manufactured in Great Britain even more expensive and widening the divide within British society.

It had been 18 years since Land Rover introduced a new model, the Range Rover, and during that period, other manufacturers had jumped in with a new segment of family-oriented vehicles, SUVs. Land Rover answered — somewhat ineffectively — with the “County” models of the Land Rover 90/110. Their cushier seats, “Go Faster” stripes and additional paint colors entertained marque enthusiasts, but did not expand Land Rover’s customer base.

Cue “Project Jay,” which became the Discovery of 1989. It combined the ruggedness, durability, off-road prowess, alpine windows and optional jump seats of the Land Rover 90/110 and combined it with Range Rover interior comfort and V-8 petrol or turbodiesel power.

In the days before HGTV, interior design became popularized through the marketing of Terence Conran and his Conran Design Group. Land Rover had them design the blue cloth and blue plastic interior, with its signature storage bags, nets and curry fork hooks. Initially only a two-door model, it grew to four doors in 1991, and came to the North American market in 1994.

It was a timely addition, as the automotive extremes, represented by the Defender on one end and the Range Rover on the other, left a big hole in the Land Rover lineup. By American standards, the Discovery seemed short, narrow and potentially tippy. In response, Land Rover Centres established demonstration courses that would prove the off-road chops of the Discovery — especially when compared with other SUV’s on the market. Land Rover’s signature jump seats could provide 7-seater capacity in a vehicle easy to maneuver and park due to its 100-inch wheelbase.

Late to the party, my Discovery I, “Gilroy”, did not arrive at my house until 2017, but it’s been a faithful companion at work or on the highway. It’s carried many people, accepted huge amounts of gear, hauled heavy trailers and even pulled a full septic tank truck out of the mud.

More impressively, the Discovery has run multiple  Camel Trophy events as well as become the starting point for generations of enthusiasts. It’s the kind of vehicle that engenders a fierce loyalty. Five iterations later, the Discovery remains a vital element of Land Rover’s success.

I live in the Green Mountains of Vermont, on dirt roads that in reality are more dust, mud or ice than actual dirt most of the year. The Discovery makes myself, my family and anyone who rides with us feel safe and confident on any journey. And it is all pretty effortless for the Discovery.

While there isn’t much that is particularly “sporty” about our favorite, the Discovery II, it represents the ultimate in an SUV: utility over sport. Off the line, school buses and Priuses have passed it by, but utility is all about function — carrying people and things from one place to another — and that’s where our Discovery II shines.

It’s fun to drive a vehicle that can carry four adults and three kids comfortably, and look good doing it. More importantly, the Discovery II is a pretty nice ride for a rig from a decade and a half ago. There are few bells or whistles, but if your sunroofs and power windows work, you feel well enough appointed.

When driving or riding in a Discovery II, you feel like you are sitting higher up over the road than in other vehicles. The visibility and natural light provided by the thin pillars and all the glass is a unique experience. The sunroofs and safari glass especially bring the outdoors in — meaning fresh air and views respectively, not leaks! The veil between passenger experience and outside world is somehow lifted by a great design.

This is a Land Rover that, from the outside, has a classic high and narrow stance. Some people get in for the first time expecting some frumpy, spartan ride and get out feeling like they’ve just been in something fun and cool.

As the driver, you can expect the same V8 attitude from the driver’s seat, whether traveling solo or at full capacity with people and things. That matters to me, because I have owned other less capable trucks and cars that had far more cargo space than the suspension or motor could accommodate when loaded. The D2 doesn’t have to work too hard to meet my family’s needs and expectations.

I have grown into a proactive Rover owner because I believe the relationship is reciprocal. It takes care of me if I take care of it. The Discovery II is generally pretty simple for a DIY mechanic like me to maintain and keep an eye on. Doing the basics like tire inflations, fluid changes and top offs quickly turns into wanting to learn and do more.

I don’t over accessorize my Discovery II’s. They are set up pretty much stock for safe and reliable daily driving, with the ability to handle themselves in off road-like encounters. They make their way into the mountains for snowboarding and skiing, to hunting camps and Boy Scout adventures and fun get-aways up the coast of Maine. I love them the most in Vermont winters, because the worse the conditions are, the better the D2 is. Everything works as intended on those days. Like any good worker, they only take days off when not really needed.

I am excited to see the ’99-04 Discovery emerge into the category of “respected classics.” Congratulations to all owner enthusiasts who keep their Discovery II on the road.