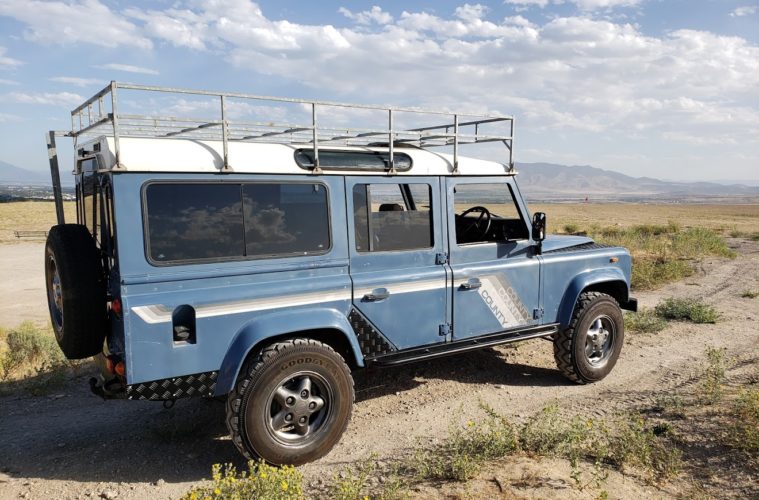 When something goes wrong with my Land Rover, as it often does, a sense of dread takes hold. Small problems induce only small worries, but the anxiety caused by a fully disabled vehicle will consume my entire sense of being. For me, the ‘distance from home’ factor makes the equation exponentially more terrifying.

That doesn’t seem to be the case for Anton Zalutsky, a robotics engineer from Boston. Anton decided he wanted a Defender and did something highly not recommended when buying a used Land Rover. He purchased one on eBay sight unseen without a thorough exam. After placing the winning bid, he and his girlfriend Yvonne Muturi booked flights to Salt Lake City to retrieve the truck and drive back home to Boston. In other words, drive 2,786 miles in his newly acquired 1989, right hand drive, Land Rover Defender 110 County. Who wouldn’t want to test a 2.5 litre turbo diesel engine with 188k miles on the odometer? At the time of writing, this saga is ongoing. We don’t yet know the conclusion, but we can already tell this is an incredible Land Rover adventure story.

Upon taking possession, Anton realized that the neither the headlamps, directionals, nor the hazards were working. After a brief consultation with the seller and a quick fix, they hit the road, heading east through Colorado on Interstate 70. Now firmly in the comfortable seats of a Land Rover seven months older than Anton, they posted online, asking friends for recommendations of sites to visit on their drive home.  Rovers Magazine contributor, Calef Letorney responded: “How about I make a list of our favorite LR shops for you to visit? ;)” A good laugh was had, but soon the comment seemed more practical than snarky. The problems were small at first…

Calef: “I think that means ‘Over the H is a problem.’ The photo you sent shows a perfect amount on the dipstick, just below the top-notch. Do not add oil.”

Anton: “The steering wheel and key locked up. I can’t turn either!”

Calef: “It’s cool, that is a ‘security feature’. Just jiggle lightly while you work the key.” With some easy first-time-owner questions put to bed, Anton was back on the road, smooth sailing.

By the time they passed through Denver, they were feeling pretty good about the trip and their purchase. They pulled into a gas station in Wiggins, Colorado and Anton noticed fluid pouring on the ground. The fuel shut off valve had melted (fortunately didn’t start a fire!) and the 110 was absolutely gushing diesel fuel. Anton removed the burnt valve, but could not find a local replacement. He plugged the hole with a large bolt, ordered the proper replacement part from RoversNorth.com, and they carried on using the manual off switch (5th gear stall). Calef encouraged the FSD (fuel shutoff delete), which apparently all the cool kids are doing, but also cautioned that too much intentional stalling could destroy the timing belt. And that would be BAD.

Back on the road again, everything was running great until the 110 sputtered and died a half-mile from their next planned stop. The engine would not start and Anton had run the battery dead from cranking. Back on the phone with mission control in Vermont, they deduced there was a fuel delivery problem.  AAA was called, and the 110 was towed a short distance to the largest truck stop in Iowa. This would help them escape the dangerous highway and perhaps they could obtain some basic parts.

Anton had a spare fuel filter, so he started with that. Unfortunately, he was unable to get fuel to flow from the filter bleeder port using the hand primer lever on the side of the 2.5TD’s fuel pump. Calef explained he needed to use the starter to bump the motor over, as the lobe on the camshaft that runs the fuel pump often prevents the hand lever from moving the fuel pump. With the sweet spot found and the primer pumping a full stoke, Anton still could not get the pump to pull fuel. What was it?  Perhaps he also had an air leak at the injector bleeder? He broke the injector bleeder screw off trying to tighten it.  Whoops. Fortunately, even missing the screw head, Anton managed to get the broken bleed screw out of the injection pump. No big deal, just another hole to plug.

Anton and Yvonne then took an Uber to a parts store. They acquired a new battery, a generic electric fuel pump, fuel hose, connectors, a few tools, and a bolt to replace the broken bleeder valve. Back at the disabled truck, Anton promptly ignored Calef’s advice: “Sleep first! You’ve not slept in days and everything is harder to fix when you are tired!” With the injector bleeder hole plugged by the new bolt, Anton bypassed the Land Rover mechanical fuel pump using the wire from the now removed fuel shutoff valve to power his new electrical fuel pump. Now the truck would shut off with the key… but the pump still would not pull fuel.  Perhaps the fuel pipe had clogged? Anton reversed the lines on the fuel pump to force fuel back into the tank and cleared the clog. After changing the lines back, the old 110 roared into life! Lesson learned, don’t draw the tank down too low or you may suck in debris.

All in all, they had spent a total of 23 hours driving and 20 hours working on the parade of problems. With 43 hours and no sleep, they completely crashed upon arriving at a roadside hotel on Interstate 80 in Iowa. I just spoke with Anton and they slept for 8 hours and are now back on the road with the intention of driving straight from Iowa to Boston.

Wish them luck….seems like they’re going to need it!