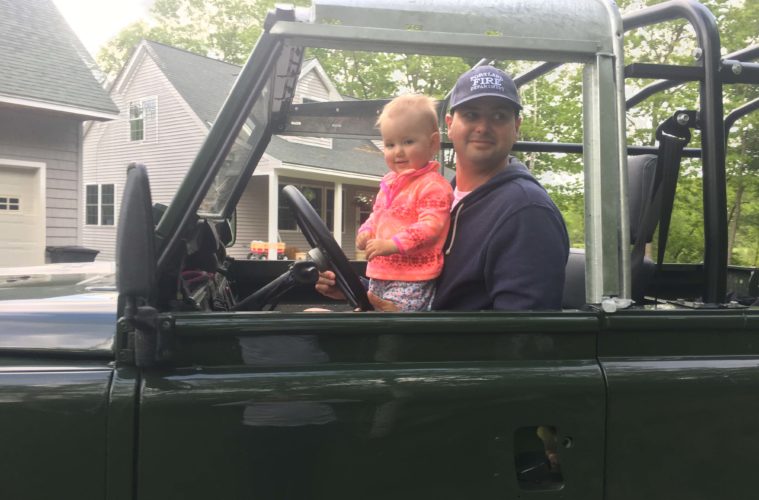 It’s 8:00pm and I’m in our garage assessing the task before me. In two days, our Defender 90 will appear in a photoshoot for Road and Track Magazine to compare the 2021 Defender with a heritage model. Sadly, our 90 sits double-parked by bicycles, a grill and the remnants of a polar bear habitat our daughter made for school. The Defender’s registration, I notice, ran out in 2018.

Since 2018, we’ve had our second daughter and moved to a new house. We’re overrun with girl paraphernalia: neighing rocking horses, doll houses and two of almost everything — one pink, one purple. The Poppy doll starts singing as I walk by and — twice now — the barking robot dogs have gone off in the middle of the night.

Amid many life changes, Land Rovers have always predominated my life. When I turned 9 years old, my father, Bob, bought his first Series Rover, which he extricated from the sapling growing through its frame. Over the years, dad, my brother Nate and I disassembled Rovers in the basement, and on one occasion stole Mom’s Range Rover to bring back to Winter Romp because the night before we had snapped an axle in the 109”.

My longstanding infatuation with Land Rovers afforded me the chance to meet Matt Hawkes, my husband. Matt and I have known each other for the better part of 20 years. A decade ago, as newlyweds, we built my 90 from scratch. I had always yearned to own a Defender. Matt had already owned several of them, including a blue ‘95 Station Wagon, one of only a few hundred imported into the US. And then there was our infamous AA Yellow 90. (In a previous Rovers article, I noted how I meshed my dream truck along with my dream man and our dream wedding carriage.)

We wanted to build something that could double as a mule for off-roading/over-landing experiences and also travel the roads. Buying an existing Defender would’ve been blown our budget, leaving nothing for modifications and necessary repairs. Instead of buying a Defender that needed repair, we decided we’d build something from the ground up.

I looked to Matt for some expert advice, inspiration and vision. Thankfully, Matt knows Rovers. At 17, he was hired to wash cars at Land Rover Scarborough. Picking up on his knack for wrenching, they soon promoted him to a Service Technician in 1998. By the time he left in 2011, he had qualified as a Land Rover Master Technician. Matt recalls when the legacy Land Rovers were new on the lot; working on these Defenders, Discoverys and Range Rovers in the late ‘90s and early 2000s gave him the unique experience of seeing Rovers untouched, authentic and debatably in the premier days of the brand. During those years he also built several hybrids, an 88” and a 109”, both coilers and head-turners.

Matt’s distinctive abilities were soon tested and utilized to create something unique and one-off from the rest. Matt is the epitome of a tinkerer. Self admittedly, he cannot leave well enough alone, and he’s always looking to rebuild something or modify and improve it. I often hear, “I’ve been doing some research, and I drew this diagram — I think I’m going to try…” It’s his brazen pursuit of something new and different that assured me we were going to make this happen. His vision for our 90 grew in scope, but roughly 18 months after we started, we had something that made us grin.

Our Land Rover grew out of the remnants of a rusty late Series IIA 88”. We wanted a coil chassis so we could use the goods from my ’96 Discovery I, the victim of relentless rust. My brother alerted us to a Defender nose for sale in Ohio. We purchased it and had it sent our way. Our newly purchased, galvanized Defender chassis came from Rovers North. Next we found a tub for short money in Long Island. Matt’s metal fabrication flair proved pivotal in our build. He rebuilt discarded Defender doors, reconstructed the Series firewall, modified the seat box and handcrafted our front and rear bumpers, interior door panels, rock sliders and swing-away spare tire carrier. After rebuilding a 4.6’ long block out of a 2002 Range Rover, we put it underneath a Lucas 14 CUX full injection system with an R380 5-speed and an LT230 transfer case.

The truck tends to confuse people, as it can be unclear what model it is, or what year this Land Rover originated. The metal dash gives hints to its series start, but the ROW parts can baffle anoraks. The final product came together in 2013, just days before my 30th birthday. My first drive became my birthday celebration. I was so nervous and excited that I kept stalling it. Matt asked if I wanted him to drive. “It’s the heels,” I scoffed, and assured him I was fine.

Time to snap back to the reality of prepping the 90 for the Road & Track comparison test. Although I’ve lived with Land Rovers my entire life, and Matt has created and repaired Land Rovers for decades, our careful considerations for reviving our dormant Defender consisted of the following:

Road and Track’s journalist, Lawrence Ulrich, and I had discussed locales for the photo ops, close to Portland but appearing photogenically rustic. Unity, ME, home of the Maine Winter Romp (which Lawrence used for his off-road test of the new Defender, and where the remnants of my first Range Rover Classic’s bumper cover still reside in a stream bed along the Narrow Gauge Trail) seemed too primitive, so we settled on Kettle Cove in Cape Elizabeth.

Matt and I arrive early for the photo shoot. It’s welcomingly mild, but there’s a persistent wind blowing in from the ocean. Lawrence and the Defender come into view. We chat Rovers and cars, and hear about his harrowing experience on the Screaming Eagle trail ride the day prior. Before anyone tells us we can’t, we drive the 90 down onto the boat launch for some photos. The beautiful sandy swath leads out into the sea. Several lobster traps have been left behind on the beach, helping to create the effect that we’re solitary in this marine landscape.

Matt and Lawrence enjoy sidebar conversations about hotrods, the history of engines and what makes the Land Rover the “Best 4x4xFar.” Still, I’ve heard it plenty; that Land Rover has ended its off-roading reign, that they’re now built for consumers who tote kids to soccer practice. For goodness sake, a recent off-road test in Four Wheeler placed the new Defender in last place behind a Tahoe, a Yukon and a Sequoia — did they really go off-roading?! All I had to see was Ulrich leaving the Maine Winter Romp trails in “his” Defender 110, caked in a proud mud bath strutting through town, to know Rovers are still #1 in my book.

As I’m listening to The Cure on Sirius radio in our LR3, I experience an epiphany. It’s OK that Land Rover, more specifically the Defender, has changed. Who hasn’t made some adaptions or evolved in the past 25 years? And speaking of change, if you were to look ahead in 5 or 10 years to find out that you’re exactly the same as you are today, wouldn’t you be a bit sad that you haven’t grown, learned — even maybe matured? If I still lived as I did in my mid 20s… actually, let’s not go there — let’s just say thank goodness for self-reflection and learning to “adult” on a regular basis. The Defender is no longer the same vehicle because we’re not the same enthusiasts. Unlike our 90, whose doors are from the ‘80s, firewall from the 70s and frame from Rovers North first designed in the 1940s, this Defender meets our needs and expectations for the 21st century. I don’t see it as a reinvented model that’s forgot its past. I think it very well knows where it’s been, and where it needs to be now.

It’s a Defender, new or heritage, that creates magic moments for its owners. One of my favorite Rover memories comes from the summer of 2009, when on a whim we took our Series IIA on a trip through the white mountains, with our ever-energetic black lab, Dooley, in tow. For a moment in our odyssey, the sun created a silhouette of the Series windshield framing our heads on the road ahead. I snapped a photo of the fleeing image that symbolized Matt’s and my camaraderie and sense of adventure.

Fast forward, and over the past 5 years, our journeys have been remodeled. Our first child, Grace, was born in 2016, and our second, Hannah, in 2018. I think that too often, the shift to things like parenthood, or the refinement of the Defender, become symbols of dullness from the perspective of enthusiasts, scoffed at for becoming too genteel. I disagree vehemently. Matt and I no longer enjoy reckless weekends and all-nighter engine swaps. By the time tubbies are done, books are read and the final “goodnights” have been given, Matt and I are ready to call it a night as well. Yes, our Rover spent years off the road because it couldn’t fit our current lifestyle. Its journey is not done though — there’s miles to go, daughters to raise as enthusiasts and adventures to envision. So cheers to our bold move to create our own Land Rover, as well as the new Defender and the joys of change. May we embrace that life and Rovers can never stay the same, and that what they evolve into could be life’s most amazing expedition yet.