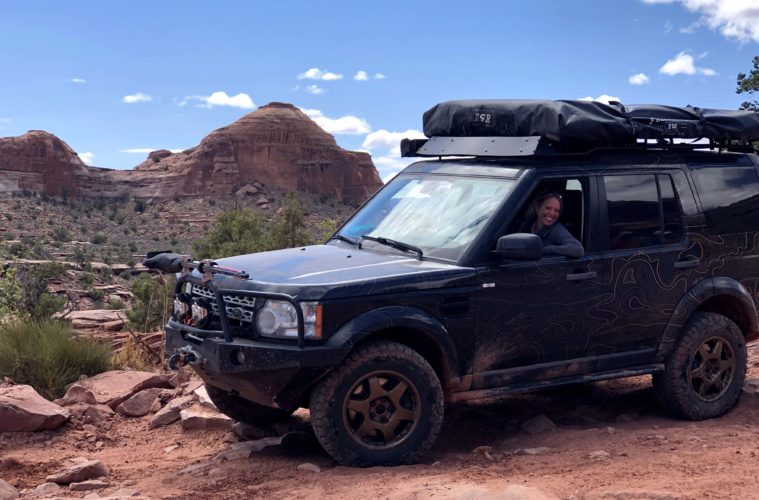 It’s always a good time to visit Moab – well, not really; it can be insanely hot and dry at times – but when a group from the Solihull Society in Colorado headed out this past April to pre-run some trails for September’s Great American Rover Rally, we had quite the opposite weather!

Peter Hope, Colorado Springs, CO, piloted his ‘02 P38 HSW and led Larry Grubbs, Fruita, CO, in an ‘00 Discovery II and Mark Handlovitch, Castle Rock, CO, driving a ‘13 LR4, on the first day – into a deluge of rain! No one expected this uncommon-for-Moab weather. It was also a good reason to stay off the slick rock for a bit.

I joined the somewhat damp bunch the following day, driving down from Denver in my ‘12 LR4, and we caravanned out Kane Creek to camp at one of the group sites. Unexpectedly, we got to drive through a rather large stream (yay! – water crossing!) as the few days of rain had made a large impact on what is usually just a trickle in the area.

An early start the next day took us to Goldbar Spike. All our Land Rovers drove nimbly over the terrain, and we decided to stop at a large obstacle damaged by the heavy rain and a good amount of use.

Much to our chagrin, we happened to be running trails at the same time as Cruise Moab, a Toyota-specific event in the area. We stopped on a ledge above and watched the group rearrange some rocks to overcome the obstacle in their built-up Land Cruisers. Then a large group of RZR side by sides followed them. We spent a good hour or two on that ledge having a few snacks and chatting about the builds of all the rigs that passed by. Sometimes Moab provides these opportunities to watch other people’s lines and use of the terrain.

That night, at a different campsite out at Kane Creek, we enjoyed a communal fire – a crucial part of any trip! Justin Zilling, Boulder, CO, joined us in his ‘09 LR3 for that evening’s festivities, which involved a generous helping of s’mores passed on to us by a rafting group looking for a campsite. We offered them the other side of our large area and, in exchange, received chocolate treats – not a bad trade!

After a day of high winds, the weather settled down and we headed to bed. I shared a tent with my friend Ashley Lane, from Broomfield, CO, and her small dog, Sawyer. I believe Sawyer occupied most of the sleeping bags on that chilly night.

The next morning, we packed up early and headed into town to meet up with Pat Bickford in his LR4. Our first trail of the day was Gemini Bridges, a relatively easy but quite scenic run. This trail had a lot less traffic on it than our tracks the day before and it was nice to enjoy the grandeur of the area. As we returned to town fairly early, we decided to head over to Fins and Things for some slick rock fun.

For those who haven’t been to Moab or haven’t experienced slick rock elsewhere, it can be a great driving experience. Slick rock consists of large outcroppings of weathered sandstone. Inherently sticky tires, or more conventional ones aired down significantly, can grip it quite well and can make for unique ascent and descent experiences.

Many years ago, Fins became one of the first trails I ever ran in Moab, and it remains one of the most fun. This time, I ran it with the Great American Rover Rally in mind, as I’ll be a trail leader at that event. It is an entirely different thought process when you have other people’s rigs to consider, so I worked with Peter and Larry a good amount on spotting, rather than just driving right through the trail. Hand signals are crucial to trusting your spotter and getting the message across in more technical terrain.

Peter led and put together the majority of our outing. However, I led Fins and Things for the group that weekend, as it will be one of the options for the Women’s Run at GARR! It was great practice guiding their trucks down, as the P38, D2 and LR4 all have a variety of capabilities, tires, wheelbases – and of course different drivers who wanted to test me in different ways! I’m pleased to say it was smooth going for everyone and I thoroughly enjoyed it.

Hardly any Rover outing is complete without at least some “excitement,” perhaps “making the owner into a mechanic,” as they say. Having a P38 with the group meant that others of us got to laugh – but also learn – as Peter skillfully solved more than one issue that his Range Rover threw at him! The power steering pump started to whine on Friday, but was still working heading into the weekend. The ABS and electronic traction control were throwing lights and acting intermittently on the trail. Saturday morning, the truck threw a right-side incorrect voltage code. Well-versed in the characteristics of his rig, Peter swapped out the sensors that day during lunch on the trail.

Next, the Electronic Air Suspension overextended on the left rear of the truck and threw a pressure code on Saturday afternoon. Once again, Peter won against the P38 when he disconnected the electronics and manually inflated the bags, then put them on the EAS ECM and removed the Rover’s maximum speed warning of 35 mph! When all was said and done, Peter drove the Range Rover home with only a vibration in the steering, most likely from a lost wheel weight.

I always leave Moab wanting more. There is a buzz about the trails and town – and no I don’t mean the sound of a RZR side by side about to fly by! Everyone is there to have a great time and enjoy their Land Rovers. I’m so looking forward to more adventures in Moab!