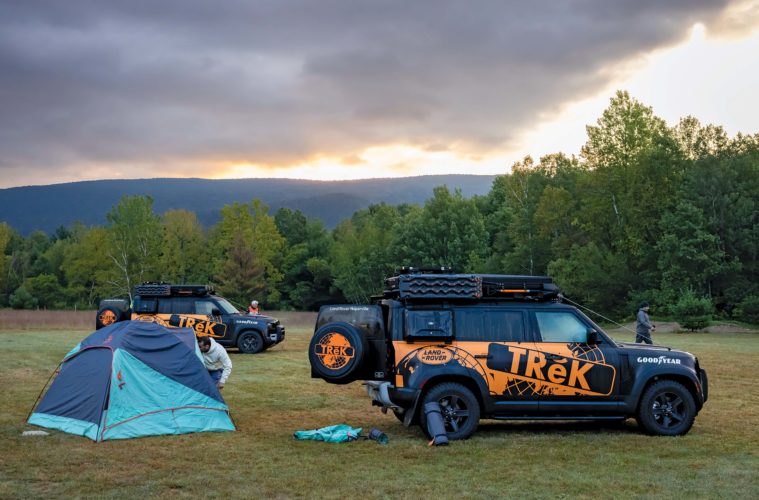 This is what happens when you let a mountain man loose,” said a member of the Land Rover Driving Team at the 2022 TreK competition. After dragging myself out of my tent at 6:00 am for a second full day of competitive off-roading, physical fitness tests, and problem-solving with my team, I nodded in agreement.

TReK became a marque identity event in 1996, the brainchild of Bob Burns and Tom Collins, the creators of Land Rover’s special events. Burns intended TReK to emulate a “Camel Trophy Lite” that would create “product zealots” of the often-isolated sales, service, parts, and administrative staff at Land Rover dealerships. Then-CEO Charlies Hughes gave it the go-ahead.

This year’s competition brought together 100 three-person teams (90 from the U.S. and 10 from Canada). The teams competed in identically kitted-out 2023 Land Rover Defender 110s. The winning team from each wave of competition will return to Manchester for the TReK 2022 Finals and the crowning of the overall winner as we go to the press.

“We are thrilled to bring back the TReK competition for another year, putting the Defender’s capabilities and our retailers’ skills to the test,” said Joe Eberhardt, President, and CEO, of Jaguar Land Rover North America.

Land Rover created a 5-team, 15-person media weekend that replicated the same onerous tasks required of the dealer teams. Sinuhe Xavier, a Colorado-based director, producer, and Discovery enthusiast, and Chris Van Leuven, a Yosemite-based journalist, and rock climber, got saddled with me. Our shared challenges included orienteering after racing up a 200-ft grassy knoll, running an obstacle course, using a hi-lift jack as a come-along to pull a Defender sideways (we actually pulled so hard we jammed it!), timed runs through wood trails, off-road driving, a Time/Distance on-road rally, creating enticing meals on camp stoves, rolling a TReK Discovery using plastic pipes and muscle power – and much more. Every event had a time limit, and the tasks fell one upon another, making for long days and nights.

Despite the aches and pains, the crammed schedule, and the long drive from New Jersey to Vermont, our delight with the TReK mirrored that of the New England teams interviewed here. Thanks to JLR for demonstrating what life can mean through a Land Rover!

Harrison Preston summarized the event as, “Awesome! We had to come together through difficult challenges, and we did. I also love the competition aspect. We chose to not have a captain; we worked together to figure out our individual skills. My favorite challenge was the Defender forward pull using only the winch line – but no winch! Taking compass bearings at the top of the hillside was the hardest. And the weather – it poured during our wave and I wound up in a mud puddle.”

Steven Em said, “I didn’t know really what to expect. I wasn’t ready for the obstacle course. TReK was challenging physically and mentally. As we drove from Mahwah to Vermont, we agreed that any decision would be made on a majority vote. We might bicker, but we agreed to go with the vote. We played to each other’s strengths. I also learned more about my teammates.” His favorite challenges? “Using the hi-lift as a come-along. Also, the spare tire carry in the woods as we prevented each other from falling on the slippery trails.”

Eric Guenard: “I’ve been at Land Rover Peabody for 11 years – daily, I see all the displays about TReK on our walls. When no one on the sales team wanted to go, I said, ‘Hell, Yah!’ All of the competition and outdoor activities appealed to me. For me, the reverse trials course drive was pretty tough. The best one for me was the relay race that morning. I’m not a runner, but I came in first. That was special for me because I’m never first! I do CrossFit, and I thought I was in good shape, but I could not run up the distance of that hill. To my chagrin, I ended up walking the last part.”

Ron McIntyre had several reasons to enjoy his first TReK. “We don’t get to work together a lot, but by Day 2, we were all on the same page as a team. Also, at 58 years old, I’ve been getting in shape. I’m not a spring chicken, so I was surprised by the physicality of it all. We did pretty good as a team while having a lot of fun.”

Justin Alley said, “it was great to get to know the guys better. Lots of driving between New Jersey, Vermont, and Maine. We spent time in stressful situations. My favorite was fly fishing. The one we did the best on was the Defender pull using only the winch rope and the cone challenge. I’ve never been a runner – the starting obstacle course was the toughest.”

Pete Warren: “I’ve been here for 16 ½ years. I work with Ron and Justin individually, but I didn’t know how we would work as a team. You can’t just have one person – everyone must work together. I had a blast. I was not a fan of the relay runs. Personally, as a tech, the tire change was really easy for me. The cone driving challenge was the most interesting as a team, and the high lift jack was the most challenging.”

The only dealer in the state sent a team for the second year to TReK. Veterans Noah Sanders and Jim Chafe were joined by Randy Schneiderheinz for this year’s competition. (As we go to press, they are competing in the final wave.)

Derek Butts, the Center Manager, said, “The TReK competition holds tremendous value for our organization. First, it encapsulates the ethos of Land Rover by utilizing the capability of the vehicles over challenging terrain. Second, the event builds enthusiasm throughout our entire dealership as our team members support the performance of the three individuals competing in TReK. Lastly, it broadcasts to the community that we ‘get it’ – that we fully understand what these vehicles are capable of accomplishing. Overall, this event pays dividends well beyond the measured expense of participating.”