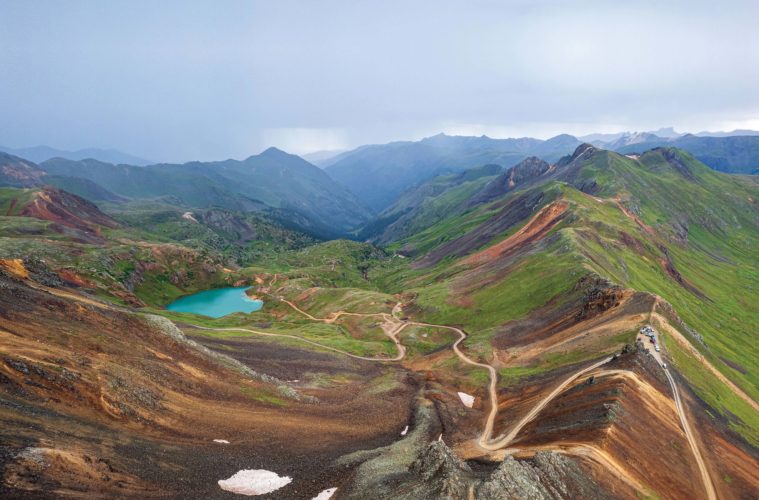 For the last six years, I’ve served on the planning commission of the Solihull Society’s National Rally, which included working with Arizona Land Rover on the 2021 Great American Rover Rally. It started with a passion for my Land Rovers and has leaked (pun intended) into the joy of seeing others share that enthusiasm – on the trails and off.

The Land Rover National Rally (LRNR) takes place in various mountainous places in Colorado on even-numbered years, and in Moab, UT, well, because it’s Moab, on the odd years. This past July’s locale was Ouray, CO, known as the “Switzerland of the Rockies.”

However, my husband Jake and I tested positive for Covid-19 – the day before we were set to leave to set up camp. I can just hear Alanis Morrisette singing “Isn’t it Ironic” in the background as I write. Not ironic (as nothing is in the song) but the worst timing I could have had since the start of the pandemic! 2022 became the first year since I’ve been a Rover fangirl that I could not participate, let alone volunteer.

Although I did not experience the excitement first-hand, friends who attended the rally shared their stories of the mudslides, extremely wet weather, and all-around fun. Each answered the same questions during my interviews.

TL: How did this year compare to other rallies you’ve attended?

TC: I’ve been attending LRNRs since 1995, which was held in Red River, NM. I will tell you I have enjoyed every one of them. Each event seems to stand out for one reason or another. Some years it’s a new friend, others it’s a particularly interesting trail, and other years, it’s a low-key event. Because of those three things, I have missed very few rallies over the years. John Wood’s Distillery is a highlight for me whenever I’m in Ouray!

TL: What was it like to be a Trail Leader?

TC: This year, I led Ophir Pass, Alta Lakes, and Last Dollar on Day One. Then I led Yankee Boy Basin, and by Friday, participants were looking for something scenic (haha), so Andy Snow and I took a group up to Clear Lake – very scenic and highly recommended. One of the people in our group was a young woman in her new Discovery 5. It had no transfer case, lockers, or aggressive tires but it was unstoppable. Oh, and a Bond Edition was there too. There’s something special about that V8 rumble!

TL: I heard the weather was… interesting?

TC: I’ve enjoyed rally weather of all types, but this year gave us something new: mudslides. In both instances, we snuck out in the nick of time, so I just saw the images. We had very high winds that day. I led the group from Telluride on Last Dollar; by the time I arrived back at the campground, one of my tent fly mullions had snapped in two.

TL: How did your Land Rover hold up?

TC: As for the rig, no lights until I arrived back in Denver. I had taken it through the car wash, but by the other end of the (Eisenhower) Tunnel, no lights! The Land Rover Whisperer has always been there for me.

MH: As Colorado natives, we’d never been to that part of the state before. We found the scenery stunning and we look forward to getting back down there. I’ve attended several LRNRs dating back to the late ‘90s – Crested Butte, Breckenridge, Leadville, and Moab – and this seemed pretty similar. Unlike Moab, the trails in Ouray are not as challenging, which meant no real breakage!

We stayed in Ridgeway at the Ridgeway Lodge and Star Saloon. It was close enough to Ouray and Telluride for us to head in each direction on Thursday to explore the two towns.

As for the weather, it was the monsoon season and according to the locals, it hadn’t rained as much as it did in quite some time. Nevertheless, the weather didn’t affect our experience at all. On Tuesday, we were stopped by a mudslide for about two hours on Highway 550 on our way back to town after running trails, but we just stood out in the rain, talked about the day, had a few laughs, and watched the highway crews do their thing!

All in all, it was a great rally and we had a wonderful time!

TN: The last time we were in Ouray in 2019, some of the trails were closed due to snow. This year we did Imogene Pass, Ophir Pass, Alta Lakes, Corkscrew Gulch, and Black Bear Pass. Black Bear was the trail I was most excited about since I had only done this once in 2013. The views were stunning and the switchbacks were very, very tight, but no problem for the turning radius of an LR3.

Although the weather was rainy and our tent had a very small leak appear mid-week, all was well at the KOA where we camped near other Land Rover owners from multiple states. Three Minnesota Land Rover members attended this year: Rik Olsen in his Bond Edition Defender, our friend Adam in “Disco Dave,” his Discovery II, and ourselves.

The LR3 had some overheating issues heading West past Denver up the mountain highways. As usual, when the temp gauge started moving up, I turned off the A/C and cranked up the heat to give some extra cooling to the system. The last time I did it, no heat came out – uh oh! My coolant had been pushed out of the system and I needed Dexcool. None was available at a nearby gas station. We drove on to the next town, but the gas station there only had the green stuff. We had made it to the tiny town of Sargents, a place with no cell service but with WiFi. I could make a WiFi call (gotta love technology) to Rob Quaife, who just happened to be on the other side of a nearby mountain pass. Twenty minutes later, he and his wife Deb arrived. They drove me 30 minutes to the next town, where I bought more Dexcool, and returned me safely to my LR3.

TN: Even though it rained daily until the last day, we didn’t have too much trouble on the trails. Imogene Pass got a little sketchy with some traffic jams on the narrow, single-track lanes, but we managed to get off the trail. Valerie and I did Corkscrew Gulch ourselves on Thursday; low visibility meant we were driving in the clouds!

The Bon Ton (old-school Italian restaurant) in Ouray has some incredibly great food and we enjoyed a meal with Dr. Rob and his wife. We also hit the excellent Ouray Brewery with our Chicago friends Ian and Marianne Rogenski who we met in 2013 – ah, the circle of Rover life.

Overall, things were good with the organization of the rally, which I understand had been hit with the absence of personnel due to illness, business, and just about every other thing that could go wrong. The Solihull Society members banded together quite well and pulled off another successful rally!

DW: We had a great time since this was our second Land Rover rally. Over the winter, we kept in touch with several folks whom we met last year in Moab, so it was great to see them and run trails with “old friends.”

Even though it rained almost every day, we didn’t mind since we were in the luxurious cabin of our LR4. Had it been a motorcycle or mountain bike rally, that would’ve been another story. We were lucky not to get caught in any mudslides, but we know of several who did several times. We’ll take rain over forest fires any day, month, or year.

I’ve been adventure motorcycling since 2014, so I’ve ridden most of the trails and high alpine passes around Ouray, but never in any 4×4. We wheeled California, Hurricane, Cinnamon, and some of the more exciting passes such as Imogine, Ophir, Black Bear, Engineer, and Mineral Creek.

Ouray is always one of our favorite destinations. Incredible views, people enjoying the outdoors in various ways, and, of course, the hot springs. The Cocktail Party at K J Wood’s Distillers was very fun with a great atmosphere. It was cool to hear how John Wood was involved with Solihull Society in the past and how his son is now getting into the sport.

It wouldn’t be a Land Rover rally if we didn’t have a mechanical issue, right? Mineral Creek was the most challenging trail we ran this rally. My LR4 performed well; however, with all the rain making the rock features wet & slippery, I managed to take a strange line & wigged out one of my height sensors, dropping it down to the bump stops. Mineral Creek is too rocky to drive out on the bump stops, but luckily, I’d brought a GAP Diagnostic IID tool and was able to raise it back up and make it to Lake City.

The people I interviewed were friends I’ve made over the years wheeling at events. Listening to their stories, it struck me that – like me – they happened to drive LR3s and LR4s. These newer vehicles, including a Discovery 5 and new Defenders, dominated this year’s numbers. Only one Series Land Rover came to the event, but without a roof and under the torrential rains, they left on the second day!

Each year, I’ve looked forward to the Land Rover National Rally from the day the previous one ends. If you’re like me, you’ll register for Moab in 2023 as soon as it opens in January 2023, at the Solihull Society.org website. Hope to see you there!