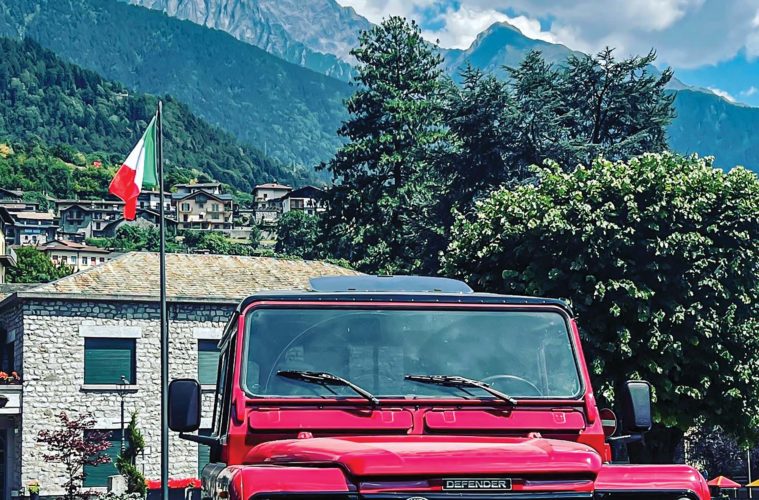 The Art of Driving Slowly

As a kid in rural New Zealand during the 1970s, I saw Land Rover Series vehicles on farms everywhere, from Bluff to Cape Reinga. Bouncing around in the back of my uncle’s 109” became the highlight of my visits to his farm. One day during the lambing season, he asked me to drive – my legs were barely long enough to push in the clutch. He taught me to go, stop and steer well enough to follow him and the dogs while they herded the sheep. We named the Land Rover the “Jolly Green Giant.” Clearly more than just a car, it had a unique personality with which I bonded like no other vehicle. It served as a channel marker in my life when I took that major step from passenger to driver. It left an indelible mark.

As a 20-something, my mates and I started an adventure travel company, the Oz and Kiwi Experience. We turned to Defender 110s for everything from airport shuttles to overlanders. Nothing – and I mean nothing – screamed exploration and independence to our tens of thousands of customers like a Land Rover.

Land Rovers continued their pivotal role in my life. I picked up my newborn kids up in a new ’98 Range Rover P38, towed our boat with our ’95 Defender 110, explored America in my ‘05 Range Rover L322 and recently, enjoyed head-turning cruises in a restored ’95 Range Rover Classic. When the summer of 2022 presented me with a month-long work break, I took the plunge and sourced a lovely one-owner, ‘94 Defender 90 in Italy. I had always coveted one and I named her Rosie, an homage to her Portofino Red paint.

Within days of wiring money to the owner, I landed in Venice and took the train to Bassano Del Grappa where she sat patiently waiting for me. The seller had checked all the fluids and prepared her for a drive-about. Along with the keys, he handed me a folder with the title and maintenance receipts. As I climbed in and fired up the 200 Tdi, I beamed from ear to ear. What had been a grand idea a few weeks ago was now a reality!

The cobbled streets of the second-century town bounced us around, and the locals who knew her instinctively waved and then looked surprised not to see her previous owner behind the wheel. I had developed a simple but brilliant plan, “Go north, and see what happens.”

We joined a motorway that wound through the Dolomites. As I shifted through the gears, “air conditioning” on full blast (both windows down and the sunroof open) to combat the heatwave gripping Europe, I discovered it took over 40 seconds to accelerate to the estimated top speed of 110 kph. A speed demon Rosie was not, and she worked harder than a one-legged tap dancer to get up through the mountain passes. As an unabashed gearhead with a stable full of high-performance vehicles, my anxiety levels rose as every car, truck, and even the local vicar on his electric bike passed me.

“Oh my God, what have I got myself into?” I thought as Rosie struggled on. The heat rose, as did my anxiety and perspiration. The lack of speed and my status as a mobile hazard stressed me out. I needed to stop and recalibrate. After a bowl of pasta and a glass or two of red, I was ready to hit the road again, destination Levico Terme, a lovely town in the Dolomites famous for its health-restoring natural springs. As we joined the motorway with reduced expectations of getting anywhere quickly, Rosie quickly rewarded me for my newfound patience.

The open windows provided a sublime sensory overload. The warm air caressed my skin and tussled my hair; it brought with it the alpine smells of forests, temperature variations from forest to farmland and even a slight chill as we crisscrossed streams and rivers. My slower speeds meant I could look around, soak in the incredible scenery and even take my eyes off the road for a moment without fear of sending us into the back of a lorry. Cruising along at 80 kph, I found myself on a road that beckoned me with many more, welcome life changes.

The following day, we headed west through the Italian Alps to Lake Como. The air was much cooler at altitude. Thick forests gave way to large swaths of open farmland, vineyards and fields of sunflowers. As Rosie and I had determined we were in no hurry, I altered the Google Maps settings to avoid highways, sending us “off-piste” through the backroads and villages of the Italian Alps. On these backroads, we felt at home. We became part of the agricultural and unhurried lifestyle of rural Italy. I had felt like a road hazard on the highways; on these twisty narrow roads, with speed limits ranging from 30 to 80 kph, we became part of the scenery. Instead of flashing lights, we were greeted with smiles and waves.

An important recognition became apparent as I settled into Rosie’s casual cadence. Stopping would not dramatically impact my day – so stop we did. At sites of spectacular beauty, of which there are too many to count, we would pull over and take it all in. If I felt like taking a coffee or replenishing Rosie’s diesel reserve, we did so at a local café or bar, or at a gas station, where inevitably an aging uniformed gentleman would happily assist with the process, communicating as best we could with smiles and a laugh.

Over the next few days, as we drove the Alps, then the shores of Lake Como, through wine country to the legendary town of Monza and into Genoa, Rosie taught me a valuable and timely lesson in life. This my friends what she whispered in my ear beneath the clattering of tappets:

“Graeme, you’re going to get to where you need to go; let’s enjoy the journey as much as the destination.”

By Genoa I’d become a convert. Getting behind the wheel induced an immediate, Zen-like response and all my worries washed away. But to be fair, I didn’t know Rosie that well and I wanted to make sure she remained healthy, so I decided to visit the temple of all things Defender, home of legendary mechanic Maurizio Ferrando of Tecnomeccanica Sport.

Maurizio has wrenched on racing cars and restored everything from the ‘70s Velar Range Rover prototype to every model of Defender. I knew this kindred spirit would be just the man to give Rosie a going-over following our 1000+ km shakedown and instill a sense of confidence in me.

Maurizio greeted me like a long-lost friend; the kinship of Land Rover owners runs deep with genuine respect for one another. He inspected Rosie, giving her the thumbs up, complimenting her solid frame and drivetrain. While waiting for an oil filter to arrive, we walked around his village, sipped coffee and chatted to his neighbors at a café. Following a full fluid change and lubrication, Rosie and I hit the road again and contemplated where to go next.

While sipping a late afternoon, beachside prosecco, I noticed huge ferries heading in and out of the Genoa port. I discovered their destinations would be Sardinia and onto Barcelona, where I had a series of work meetings. This new plan went into immediate effect, and the following day Rosie and I boarded a ferry to Porto Torres.

Our layover in Sardinia provided the glimpse I needed to fuel a desire to return. Here I found quaint historic villages, incredible scenery, and crystal-clear waters in vivid shades of blue. The hotels and restaurants offered tremendous value, more so than the mainland, and the locals welcomed visitors with genuine delight.

An early morning start found us loaded aboard the next ferry to Barcelona. Fourteen hours later, after a peaceful crossing, Rosie stood out as we made our way through the narrow streets and lanes, garnering warm smiles and waves of approval from tourists and locals alike. After completing our mandatory work tasks, we took the back roads to Monserrat, through the beautiful mountain principality of Andorra, and meandered along the Pyrenees, west through France, to Biarritz.

We arrived during the Fêtes de Bayonne festival, which meant that most towns and villages in the area were filled with Basques clad in traditional white, with red scarves and waistbands. From Biarritz we crossed back into Spain, stopping in San Sebastian and the historic and beautiful city of Bilbao. The drive to Santander provided vistas of hillside vineyards, and lush forests of soaring trees in brilliant hues of green.

I wanted to take Rosie to Solihull, her ancestral home, so we boarded a Brittany Lines ferry for a 28-hour crossing to Portsmouth. Once there, we made our way, slowly of course, through the British countryside where – except for her left-hand drive – she blended in perfectly. We paused at Stonehenge and joined hundreds of others, baffled by how these massive stones were assembled, before the last push to the British Motor Museum at Gaydon, where Rosie’s royal relatives were on fine display. These included the Queen and Queen Mother’s fleet of Land Rovers from a Series 1 to a 110 Defender and several custom Range Rovers. Rosie’s excitement was visible from the oil spots she left on this hallowed turf.

We completed her pilgrimage home by traversing the final 25 miles to the gates of the Land Rover factory, a tribute to the site of Rosie’s birthplace. Having made this pilgrimage, she would continue her adventures with me in the USA, joining my ’95 Range Rover Classic and an ’05 Range Rover HSE.

Over a few thousand kilometers and four weeks, Rosie taught me something I had not known, but now appreciate beyond words: the art of driving slowly.