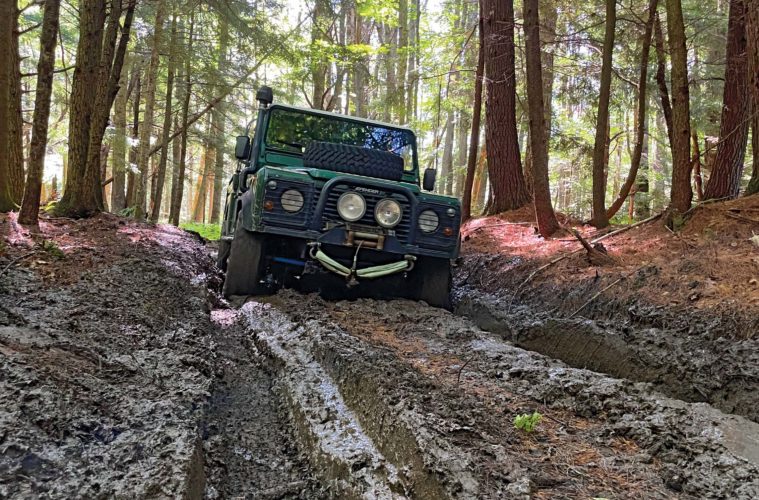 Many New England Land Rover enthusiasts have come to recognize John Vallerand and his stash of used Rover parts. He’s very hard to miss with his ZZ Top-length beard and heavy Maine accent. He attends many of the old-school British auto events such as the All Metal Dash and British Invasion to promote his treasures.

For the past three years, John has kicked around the idea of hosting a Land Rover event at his 200-acre property in Greene, ME. Near his house lies a graveyard of old Land Rovers, ranging from Series I’s to Range Rover Classics. John has no social media presence, so spreading the word would rely solely on his phone contact list. When I offered to help publicize it through Instagram and FaceBook, I told him he should create a catchy name for the event. He immediately fired back with “Maine Misfits & Rover Bits.” I told him it was too long and didn’t really flow. He replied, “I’m from Maine. I don’t belong to any group and I have a bunch of Rover bits to sell.” With that statement of stubbornness, the debate ended.

John set the dates of August 19–21 for Maine Misfits & Rover Bits. We invited every model of Land Rover. We promised 200 acres of trails, rustic camping (with the option of hotels in neighboring Lewiston), campfires, a Saturday dinner, and access to Rover parts from the “boneyard” as well as those stored inside the barn. John ordered a couple of porta-potties, set up a potable water station, and purchased eighty pounds of chicken breast and two large beef briskets. The weekend prior to the event, John and his son Vince, along with their friend Heidi, went out into the woods to clear a few overgrown trails. They also nailed up large arrow signs to direct traffic where the trails didn’t offer an obvious path.

By midday on Friday, the 19th, the Land Rovers began to roll in with attendees staking claims to the best camping spots. The sites spread out from John’s lawn to the side of his barn, to those nestled in the forest, set back from the rows of Land Rovers. Luckily the forecast called for hot and sunny weather, the best possible camping conditions. Some campers had full cooking set-ups with planned menus; for example, Mike Kenney and his famous deep-fried donuts with chocolate covering. While many brought their own campfire coffee apparatuses, John generously served endless cups of coffee and pastry from his wrap-around porch, so those who didn’t bring coffee gear had no worries.

Throughout the three days, we counted a total of 102 Land Rovers that rolled onto the property, including Mark Letorney’s Defender. (It would have been 103 but our Editor, Jeff Aronson, showed up in his Triumph TR7, whining about “ferry problems.” Harumpf!) Some came for a short visit while others spent the entire weekend at John’s place. By the time breakfast was finished on Sunday, there were approximately 30 Land Rovers still there, mostly people who had camped out.

Maine Misfits had all the components of a classic Land Rover gathering. It was a chance for old friends to catch up, meet newcomers and deepen connections with those who only knew each other from afar. The event brought vehicles from all over New England and the Northeast.

The “wheeling” element of the gathering was incredible. The trails provided numerous challenges with many levels of difficulty. The trails ranged from barely beaten paths to green lanes and boasted rock ledges, mud ruts, and water crossings. All weekend long, groups of 3–10 Land Rovers would leave the main staging area and head down one of several paths to hit the trails. Those that started out with light mud on Friday became churned up into full-blown mud ruts by Sunday. Before leaving for home on the final day, my wife Robin and I foolishly went out for one last solo run in my Series III. Once we reached the far end of the property, my Land Rover sank to its axles in the thick mud. What would have been a 15-minute run took us an hour to free ourselves and make our way back to camp.

My favorite part of the event was the “night wheeling.” At sunset on both Friday and Saturday, small groups headed out to explore the woods. When it’s dark, the trails offer a whole new set of challenges. You are unable to see some of the ruts, obstacles, and routes that lie ahead. Luckily, Vince Vallerand led our group, as he knows the property very well. Don Jenks was completely bogged down in a swampy patch; with no nearby tree to hook onto, he attached a tow strap to the vehicle ahead of him. With a quick lunge forward, that truck thrust sideways and ended up on a stump. Jesse Ackerman then left the front of the group in his modified ‘03 Discovery II to circle back and pull the Rovers backward to hard ground. These night runs had us out for 3–4 hours, mostly recovering each other.

Years ago, Vince had aptly named one of the sections, “The Money Pit” due to the breakage of axles and smashing of body parts. It’s basically a swamp with trees growing up through it. On Saturday night we entered this area, which led to eight of the ten Land Rovers being submerged up to their sills in the thickest mud I have ever seen. Vince made it through on his monster truck and aided in the recovery of each subsequent vehicle. The only other one that made it through unscathed was Forrest Clifton in his highly modified Defender 110.

The Maine Misfits feast took place on Saturday evening. John wheeled out his massive custom grill midday; it is so large that he was able to cook all 80 pounds of chicken breasts at once. Perplexed by how to keep the grill’s thirty-pound cover open, John modified it by installing a Series bonnet hinge to prop it up. Next to the jumbo grill, Kevin Gagnon manned a large meat smoker with two lean beef briskets that had been cooking for two days. Add to this, fresh corn on the cob, coleslaw, salads, and a plethora of desserts, and you have a feast fit for any Rover king.

Following the dinner came a short awards ceremony; well, I should say “award” in the singular. Gavin Warren of Red Rover Parts took an old Series IIA ring gear (crown wheel), powder coated it, and engraved the Maine Misfits logo on it. The award went to the attendee with the most damage done to his/her vehicle. Tommy Blair grinned as he accepted the award. The day before, Tommy had taken his [mid-90s Range Rover Classic] up over the rock ledge section called “Tree Hugger.” The Range Rover tilted sideways, came down over the ledge, and rested against a tree that leaned toward the rock. That buckled the whole roof section above the rear passenger window, smashing the glass as well. Shortly afterward, he tried it going in the opposite direction and the exact same thing happened to the driver’s side rear window and roof section.

Maine Misfits was truly one of the most entertaining events I’ve been to in a while. It had all the components that make a great Land Rover event: good food, good trails, and good friends. It brought together people that I’d normally not see in the middle of summer.

I’m really looking forward to next year’s “Second Annual – Maine Misfits & Rover Bits” event. No dates have been set at this time, but it will most likely be mid-August. Hope to see you there!