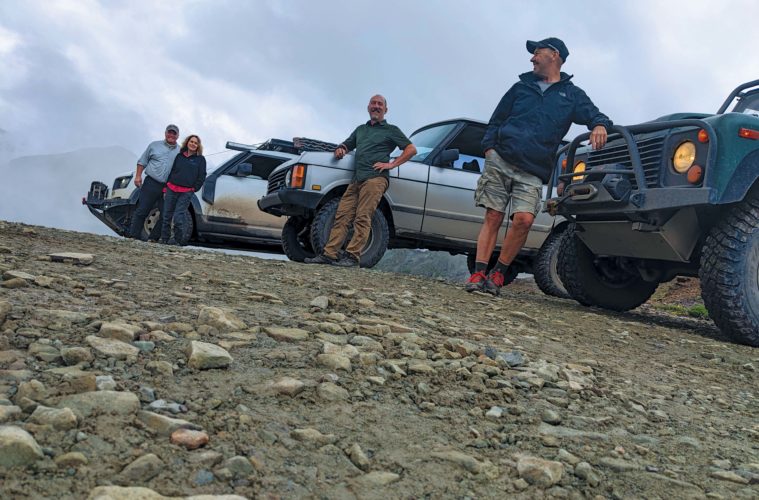 Out of the five Land Rovers in our household, I had only two good options for a 6,032-mile adventure last July: “Sparky,” our ’89 Range Rover Classic, or “Westie,” our ’06 Range Rover L322. The latter, a newer acquisition, has over 190,000 miles, but I’d driven Range Rover Classics for 25 years and Sparky for five years. With proper preventative maintenance, it had never let me down and thus I anointed it as the adventure vehicle.

The “to-do” list before the trip included a leaky power steering system, inoperative air conditioning, and some cosmetics. Power washing the engine helped find the source of the leak (and resulted in a soaked distributor amplifier –oops) and a decision to swap out a noisy alternator. The air conditioner required that I disassemble the dashboard – not fun, but it was the third time I’d done it. Time was running short for the remaining loose wheel bearing, wheel alignment, and air conditioner recharge.

A long time ago, I’d made a sea voyage from Long Island, NY, to Virginia Beach, VA, in a 1938 Vineyard powerboat, and I found myself screwing down the compass in the cockpit as I was leaving the dock. This memory came back to me as I pushed the analog clock back into the fascia. Like the boat, Sparky would require fettling on this adventure.

I left Norfolk at night and discovered the dashboard lights would not illuminate and that I’d forgotten to reconnect the dimmer switch. These comprised Fix #1. Meanwhile, the Great Smoky Mountains lived up to their name; the “smoke” hovered over the water as the fog rolled down the rivers. Sparky handled “The Tail of the Dragon” quite well, even in corners with speed limits of 15–20 mph.

In Nashville, I rectified two errors: forgetting to pack my sleeping bag and getting a haircut. Fix #2 repaired an inoperative driver’s side door lock. (A shady spot at an REI provided the perfect “shade tree garage.”) I also discovered Black Abbey Brewery, with its wide selection of Belgian beers, and rekindled a friendship with 6th-grade friend Scott Peterson and family (Elizabeth, Cooper, and Millie). Downtown Nashville reminded me of Bourbon Street during Mardi Gras.

I headed out of Nashville early the next morning, but not long after, I heard a “pop” from the engine as the tachometer needle dropped to 0 and the Range Rover coasted to the side of the road. All levels of disaster ran through my head. Lifting the hood, I expected to see a deluge of fluids, but no – nothing. The engine would crank but not fire up. I began the process of fuel, fire, and air (or food, water, and shelter, as my daughter Logan says). I checked the spark from the coil by pulling the wire from the distributor and setting it close to the metal. Spark! Crap! Onto fuel – I cracked the line near the fuel rail. It dripped and after turning the key, the drip intensified; thus, the fuel pump worked.

I called more knowledgeable ROAV enthusiasts Ralf Sarek, David Short, and Drew Swoboda; Drew asked if I had checked for spark from the distributor – I had not. I pulled a wire from the distributor cap and held it close to the terminal – and nothing. To double-check, I pulled the coil wire from the top of the cap and held it close to the terminal. The result was, err, shocking – don’t do this at home! Meanwhile, David Short contacted friends in Tennessee – no joy – so my host Scott drove two hours to secure a rotor for me. Once installed, the motor fired up and sounded terrific.

With the Range Rover running well, and with the benefit of cooler temperatures, I decided to make up for the lost time. I knocked down state after state until I reached Kansas. Why is it so long a drive? I discovered it may be flat but it’s not level; one border lies at 600 ft, while the other sits at 3,000 ft. Overall, it took me an additional 19 hours and 1,400 miles of driving with only stops for fuel, but I finally made a Walmart parking lot in Colorado Springs at 12:30 am local time.

The next day, over Monarch Pass to Ridgeway, Sparky began to run rough again. When I met up with the Virginians also attending the National Rally (Mike Boggs, Ralf Sarek, Bob Steele, Doug Crowther, David Short, and Clay Ayers, among others), we turned onto the Million Dollar Highway and Sparky stopped running. Pulling the rotor on and off seemingly revived the Classic; I called Rovers North for another rotor, but it wasn’t until nighttime that I saw sparks emanating from the plug wires. There lay the source of my running issues and burned-out rotors.

My drive west coincided with the Solihull Society’s National Rally, and I enjoyed every moment of my time along Imogene Pass (I never get tired of that one) and Yankee Boy and enjoyed following pinch-hitting trail leader Mike Boggs through Ophir Pass. I experienced torrential rains and enormous hailstones, but also stunning sunsets – that’s what my Range Rover Classic made possible.

I packed up, said my goodbyes, and hit the road toward Price, Provo, and Salt Lake City, UT. I enjoyed terrific hikes around Salt Lake City and continued driving toward Logan, UT (in honor of my daughter, of course) and the Tetons. The next morning, as I drove further up

a trail to get closer to those majestic mountains, they really started to show their colors. At Taggart Lake, I witnessed a near picture-perfect reflection of the Tetons in the clear waters. It was mesmerizing. Then, on the way to Colter, a herd of buffalo stopped traffic by sauntering across the road. Man, they are big!

I entered Yellowstone National Park and enjoyed several hikes there. I discovered that Old Faithful is always faithful. Continuing north on the way toward Montana, I found more buffalo – but also discovered that mudslides had blocked both exits from the park in my preferred direction. I guess I had to spend more time in the park! Yellowstone fascinated me with its varied topography. The geysers appear in a valley while the east gate region reminded me of the canyons around Gunnison, CO. Crossing the Montana-Wyoming border, I entered the 2.5 million acres Shoshone National Forest and drove by the 350-ft high Buffalo Bill Dam and Reservoir. The city of Cody, WY, is named after him.

To meet my schedule, I had to leave the off-road trails and narrow roads for the great American highway system. Sparky cruised at 75–80 mph, yet returned 16 mpg on my 17-hour journey to Comanche Campground in South Dakota’s Black Hills National Forest. I took a break to hike the scenic trails in Custer State Park and make the obligatory stop to stare at Mt. Rushmore. I would treat myself to another hike in Minnesota with views from bluffs overlooking the Mississippi River and a “down day” with friends, but eventually, I had to get back home. I knocked back many miles in Wisconsin, Illinois, Indiana, Ohio, West Virginia, and finally, on Sunday, August 7, home at last.

Of my 18 days and 6,032 miles, I spent 4 nights camping, 3 nights sleeping in the back seat, 1 night in an Airbnb, and 9 nights with friends and family. I discovered 6 breweries and savored 5 taco meals. I saw the splendor of the Rockies, the majesty of the plains, the mighty Mississippi, and endless vistas on stunning hiking trails. Plus, I accomplished all of this in an ’89 Range Rover Classic, my favorite Land Rover.