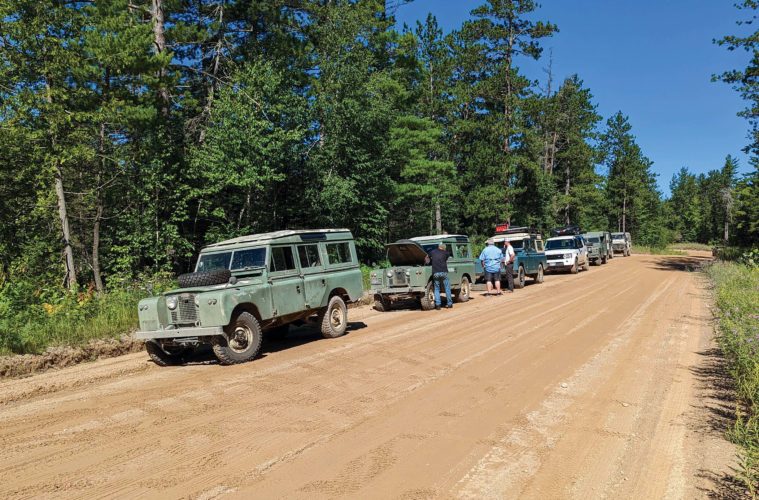 This Land Rover trip started as most do – ordering parts from Rovers North.

My ‘60 Series II SWB Station Wagon had accumulated a need for the following: new brake shoes, clutch slave cylinder, starter motor, battery, and power ports installed on the dashboard. Also, it cried out for fluid changes and the replacement of the broken studs that connect the exhaust manifold to the downpipe. Once accomplished, I could join other Minnesota Land Rover enthusiasts from the Twin Cities region in the “Boxy Truck Tour.”

Lake Superior borders the northeast corner of Minnesota, and the tourism people have laid out a route around it called “The Circle Tour.” Our trip would follow this route from Minnesota through Wisconsin and Michigan to Canada, then back to Minnesota.

Lake Superior has the largest surface water area of any lake worldwide with over 2,700 miles of shoreline, and the rolling hills of the Great North Woods hold dense forests dotted with streams, waterfalls, and smaller lakes. We hoped to spot the usual wildlife in the region, but the moose, deer, turkeys, and beavers tend to shy away. Mostly, this trip would challenge our Series Land Rovers on the pavement. We know they’re fantastic off-road, but highway miles can tax both driver and vehicle. The multi-generational group, ranging from ages 3–64, would have a great opportunity to take it slow in our Series Land Rovers.

Tony Kieffer, who planned our camping sites, has been rebuilding his ‘64 109” Station Wagon for the last 12 years, but really accelerated his progress over the last year. Along with a galvanized chassis, he installed a completely rebuilt engine and drivetrain. It ran like a thoroughbred – albeit a thoroughbred mule. He joined me as we drove to John Wendt’s house to view his perfect ’67 109”.

Five miles into our drive, my Series II started misfiring. I cleaned out the jets and the carb bowl but the misfires and stalling continued until I got close enough to hook up a tow strap and bring it into John’s garage. One multimeter test later, I changed out the coil for my spare. The problematic manifold studs proved very stubborn, and I resorted to having the manifold shop-welded to the downpipe and hoping for the best.

We met up with Ryan Lynch in his restored NAS 90, then drove the 180 miles to Gustaf Kupetz’s cabin just north of Duluth, arriving after dusk. I had not seen Gustaf in a long time, so I lured him out for a late night of sipping Aquavit. The next morning, Gustaf’s kids, Oskar (8) and Margaux (6), proved quite adept at throwing stuff in the back of his HiCap 110 300 Tdi.

However, night driving revealed a burnt-out left headlamp on my Rover. As our convoy continued through Duluth, more electrical gremlins revealed themselves. I noticed my charging amps jumping around, hinting at a big electrical short. Inspection of the engine bay revealed that the J-hook on the battery had stripped threads, allowing the battery to slide around in the metal frame. When I hit the brakes hard, the battery would slide forward and short out. At a local auto parts store, I purchased and installed a new J-hook (and a headlamp); the t-shirt I had received at last July’s National Rally in Ouray, CO, served to help pack the battery in place. A necessary sacrifice. We then hit the road again.

On the way into Cornucopia, WI, the charging light illuminated my fascia. Normally, this indicates either the lead wire coming off the back of the generator or a loose belt. This time, the tensioner bracket had broken in two! After locating the pivot bolt hidden in the sand, I removed the fan to get access to the bracket hole. I saw a marina just across the street from our lunch spot; there, I hoped to find a welder. A very affable, capable young man knitted the bracket back together, and we continued on our trek.

In Ontonagon Country, MI, we met up with Dave and Mary Allton at a campground. Their ‘66 Series IIA Marshall ambulance has all the comforts and conveniences of home. I took the opportunity to complete a fluid check; only the right front swivel balls required more gear oil. This day’s travel brought us to a delightful stretch of beach in Marquette, MI. Camping on the sands with the sounds of waves crashing was delightful, and I found my Camel Trophy-style bath in Lake Superior “refreshing.” [Average water temperature is 40 degrees F -ed.]

Tony Kieffer and his wife, Shauna, and kids, Jack (3) and Annika (7) met up with us on our drive the next day on the way to the Great Lakes Shipwreck Museum and Whitefish Point Lighthouse on Michigan’s Upper Peninsula. John made the dirt road route there more exciting by losing a disk brake pin, which resulted in a brake failure at the right front wheel. Fortunately, he carries spares! The museum provided a profoundly moving experience, as we took stock of the tragic wrecks – a testament to the power of this lake. We crossed the border into Canada without incident and stopped at the fantastic Agawa (tourist trap) Store. This is a great place for provisions, fuel, and hand-made Native moccasins. We then proceeded to our planned overnight stay at Pancake Bay Provincial Park. It features a three-kilometer beach and crystal-clear water at the campground’s edge. The kids could just run. The only interruption of our reverie came from a park ranger, who informed us of the fines for beer drinking on the beach. He left us with a warning, provided that we dumped them out on the spot.

The next day, the rear section of Tony’s 109” exhaust rattled loose. He trimmed a Molson Canadian can to hold things together until we could find a real exhaust holder. A bit more sightseeing brought us to the Lake Superior Provincial Park in Ontario. The prehistoric rock paintings describe how the Mishupishu horned lynx caused so much havoc in the area. In a Wawa, we were able to fortify ourselves with lunch and buff up Tony’s exhaust with metal and clamps from the nearby Canadian Tire. They really do seem to have everything.

Some calm overnights and gentle swooping hills and valleys at 25–50 mph lead us to the delightful town of Nipigon, ON. Our friend, Phil McGuire, has a farm there where he grows whatever is in season. His son-in-law, Roger, stopped by to say hello. On other trips, Roger has led us through the Ontario forests to see bears, waterfalls, and crystal-clear lakes. It was great to catch up.

We continued on to Sleeping Giant Provincial Park. The General Store and Tea Room near the campground have been in place on Silver Islet since 1971 when an underwater silver mine provided local employment. The tea room became a lovely setting for a cup of Earl Grey!

Our last night on the Boxy Truck Tour ran quite late. Tony marked the occasion by sharing his “Land Rover Problem Solver” – a bottle of Dewar’s. After a slow start the next day, we crossed the border back into the USA and continued on to the Minnesota Land Rovers yearly picnic. We had some tales to tell! This year’s picnic took place at the Trestle Inn (yes, it’s really built from abandoned railroad trestles), nestled within the Superior National Forest.

We described our experiences as mellow on us, but the 1,450 miles total took a toll on our stalwart ’60s Land Rovers. Thus, this trip ended as most do – ordering more parts from Rovers North.