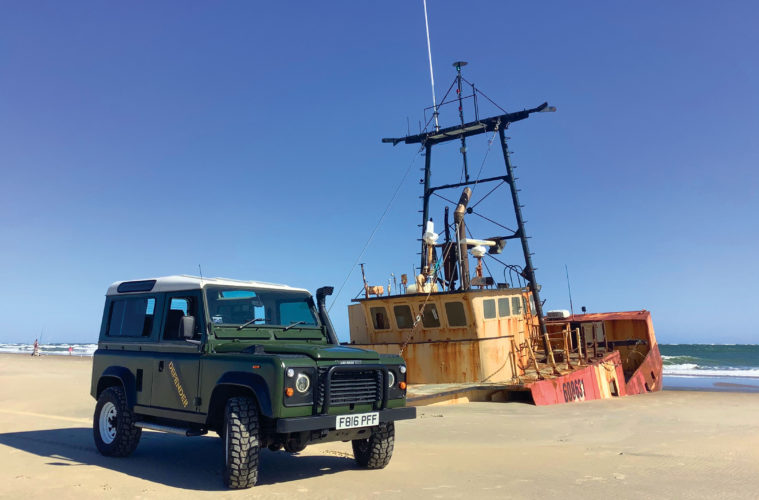 Thank you for being a sponsor for the Rover Owners Association of Virginia’s (ROAV) 2022 Mid Atlantic Rally (MAR). Your consistent support over the years has helped bring our club and event to the level that it is today. We would like to especially thank Jeff Aronson, Gene Schubert and Nick Cota for setting up a truly challenging RTV course. This course was one of the highlights of the event. Any RTV course that requires winching to get out of the 6th set of gates should be held in high regard! We will see you next year…. at the MAR!

[Gene, Nick and I have finally dried out and scraped off the mud from our clothing! Thank you for the kind words, and especially for the hospitality and generosity demonstrated by everyone at MAR. We certainly hope to return! -ed.]

I have a BMW motorbike and am a member of MOA, which puts out a surprisingly good monthly magazine called BMW Owner News. It’s filled with articles about travel by motorcycle. Seldom is a car seen or mentioned in its pages, but in the August issue I was surprised to see a Defender 110 in an article titled “Remember to Breathe.” It’s about a woman going on a last-minute adventure tour in Nepal on – egads – a Royal Enfield. Of course one of the support vehicles is a Land Rover, doing what Land Rovers do so well.

Hope to catch up with you at the Mid Atlantic Rally!

[What better vehicle for an adventure in Nepal than a Defender! It was delightful to see you at MAR; thanks for all you help with the RTV course -ed.]

I’ll see you in two weeks at the British Invasion in Stowe, VT, with my 1988 Defender 110 RHD V8. Looking forward to meeting many of the Rovers North crew that I converse with weekly or monthly.

[It was a pleasure to take in all the Land Rovers at the 2022 British Invasion last September. We hope you enjoyed the camaraderie as much as we did –ed.]

While visiting The Farmhouse at Back Bay Brewing, I came across what appears to be a Defender 90 variant on the can of a potent IPA. Of course I had to bring some home to take for a “test drink” and I can assure you that the Hop Landy 90 lives up to Solihull standards! After a tasty pint, I thought I’d pose the Hop Landy with my Landy, a 1972 88 Series III (aka The Leaky Cauldron). I’d say they make quite the pair when parked.

I’ll close by telling you I’ve appreciated all the help and parts I’ve received from Rovers North over the last five years, and I really enjoy your magazine. Keep up the great work.

[Thank you for the field report on the IPA. We agree that your Series III and the beer can look terrific together -ed.]

Your team is knowledgeable, patient, supportive and all-around awesome. My ’93 Defender 90 200 Tdi RHD has needed a lot of work and you guys have done an outstanding job of supplying what I need, when I need it. I do not know how much help you provide with Customs to Canada, but you get the parts through when I need them. Thank you!

[You own an appealing Defender and we’re delighted to be a part of your Land Rover experience -ed.]

I wanted to share this photo of my ’04 Discovery II SE, one of five that I own. I’ve cleaned it up and brought it back to the beauty that you see in this photo. It might have a few bumps and bruises, but it’s still just as beautiful as the day it made it to the States. I was a Land Rover mechanic at my local dealership for 10 years. I’m no longer working there but I’ve continued to work on them for 21 years for other enthusiasts and as a hobby for myself.

[We think it’s a stunning example of a Discovery II, and we admire your appreciation and photography of that wonderful model -ed.]