Go South, Young Woman: A Road Trip To The Ends Of The Americas

[A Brit by birth but a Chilean at heart, the former English teacher has spent the past three years exploring South America. A freelance travel writer, blogger and guidebook author, Steph can be found on long road trips in everything from Land Rovers to tiny Chevrolets and camping beneath the stars in the Chilean wilderness – ed.] 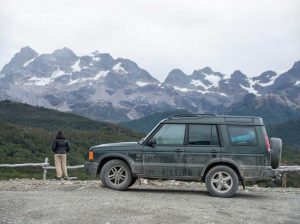 Many places can be considered the “end of the road,” but the final stretch of gravel at the southernmost point of mainland South America — well, the entire Americas —  constitutes a genuine end-point.

Thirteen-hundred sixty miles (3,022 km) from the capital of Santiago lies Punta Arenas, the largest city in southern Chile. A growing number of tourists arrive in Punta Arenas to hike the now trodden path around Torres del Paine National Park, but we sought a more unusual adventure.

For my dad, Tony Dyson, brother Ralph and our family friend Betsy Digger, who had flown out to join me in Patagonia last March, this became their first trip to Chile — a place that I’ve called home for the past year. Our plan was to visit rarely-trod territory. First explored by the Portuguese in 1520, and settled by the Spanish towards the end of the century, for most modern tourists the sweeping coastlines along the north and south shores of the Strait of Magellan barely rate a footnote in their itineraries. 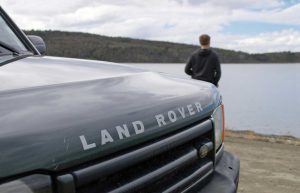 In Punta Arenas, we rented a 2002 Discovery II Td5 from a local company, packing the boot with enough provisions to last us five days — there wouldn’t be any shops en route. But more than the large storage space, we wanted a Land Rover for its four-wheel drive, high ground-clearance and off-road oriented suspension. They would prove essential for a trip along gravel, dirt and poorly-maintained roads.

As we navigated out of the city, the undulating glimmer of the ocean stretched out to the south and gave promise of the unknown awaiting us ahead. We headed off to drive to the ends of the Americas. 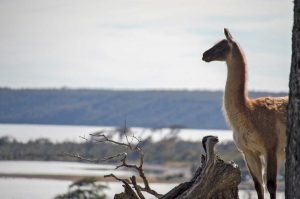 Our first destination was Cabo Froward, the southernmost point of the continental Americas. Marked by the Cruz de los Mares, a stunning sculpture created to honor Pope John’s visit 30 years ago, Cabo Froward overlooks the Strait of Magellan. We stared in awe at the Isla Dawson, an island made up of the final jagged peaks of the Andes Mountains, before they plunge into the sea.

Unfortunately, the cape is only accessible by a grueling, five-day, 32-km hike from the road’s ends. With only a few short days for our trip, visiting that remote point would have to wait for another time. Instead, after an hour’s drive from the city, we pulled up at the green metal signs proclaiming the “Fin del Camino” (End of the Road) in thick, white letters. We viewed a dense forest of Magellanic beech trees on one side and the crashing waves of the ocean on the other. The sky looked thick with clouds and a strong wind blew; it felt like we’d travelled a long way from civilization. 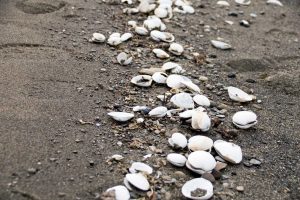 Leaving the Land Rover parked overlooking the water, we hiked a short distance around the coast to get as close to the edge of the continent as possible. Jet black rock jutted out of the beach and lines of gleaming white clam shells, emptied by gulls and petrels, decorated the sand in rows.

Further along the shoreline, the red and white buildings of the San Isidro Lighthouse — built in 1904, to help ships navigate the Strait — seemed to grow out of a narrow headland, just about visible through the rapidly darkening clouds. Stripping off our shoes and socks, we walked into the sea, realizing that the freezing water licking our toes had travelled all the way around the globe — here, at the southernmost edge of South America, is where the Pacific and the Atlantic Oceans finally meet.

The chance to camp in the wilderness formed the main attraction of our road trip in Chilean Patagonia and we ended up doing just that on our first night. Heading back along the gravel road towards Punta Arenas, we discovered a tiny campsite, a stone’s throw from the beach, to pitch up in for the night. Turning off the road and into the gateway of the campground, we were more than thankful to have four-wheel drive to help us push through the thick mud that squelched and skidded beneath the Discovery. 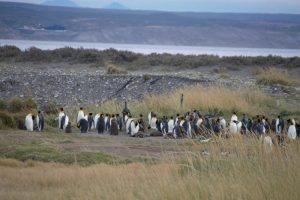 As night fell over our little stretch of paradise, we started a small camp fire and enjoyed a few glasses of delicious Chilean red wine.

The next morning was an early start; we had lots of ground to cover as we sought to cross over onto Tierra del Fuego, the archipelago that completes the South American continent and is a territory that belongs half and half to Argentina and Chile. It was a short drive back the way we’d come, passing monuments to some of the region’s earliest visitors, including the naturalist Charles Darwin and the Spanish settlers who first attempted to colonize the region, but died from exposure and starvation. That would explain its name, Puerto del Hambre (Port Famine). 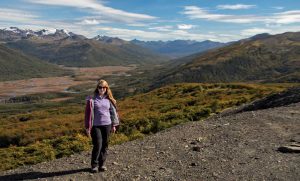 By the early afternoon, we had crossed the Strait of Magellan on a car ferry, watching from the top deck as the yellowed grasses and cloudy mountains of Tierra del Fuego came ever closer. The road headed due south, passing through the sweeping pampas plains, where small herds of guanaco — the wild ancestor of the llama — grazed every few hundred feet. As sunshine broke through the overcast sky, the shimmer off distant lakes caught our attention and we pulled over often then for a glimpse of flamingos feeding in the shallows. 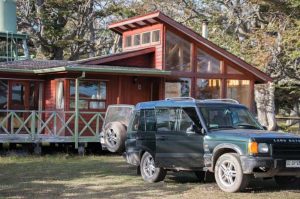 Although the sparsely populated region proved historically hostile to human life, we marveled at the biodiversity of wildlife that found its home here. Soon, we were ticking off different types of geese and birds of prey, all sighted from the windows of the car.

A unique colony of king penguins, the only one in the whole of the Americas, imposed its magical spell on this trip to Tierra del Fuego. In 2010, eight birds had arrived at a small bay called Bahía Inútil, settling as a colony. That had since grown in number to ninety and, for a small fee, visitors could enter the private reserve to observe the penguins. From the viewing point, we spent an hour watching as some shuffled between the main group of birds and the beach while others passed the entire time preening themselves and singing. It was beyond surreal to admire these elegant king penguins away from the icy lands of Antarctica where they normally live.

In the early evening, we piled back into the Land Rover and continued along what was now but a dusty track, carefully avoiding the thick furrows that had been carved out by other vehicles when the road had turned to mud over winter. Our plan was to spend the night on the edges of Lago Blanco, one of the largest lakes in Chilean Tierra del Fuego at Hosteleria Las Lengas, where we rented a cabin and enjoyed a BBQ beneath a brilliant ceiling of stars. The next morning, leaving the cabin to re-pack the car, vivid green Austral parrots chattered in the trees above and two Magellanic woodpeckers, both jet black except for the exquisite red feathers of the male’s head, pecked rhythmically at a nearby fallen tree trunk. 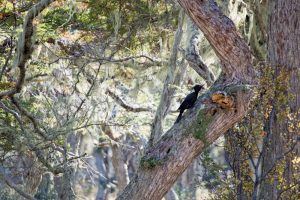 The next few days saw us head deeper into the south of the island, climbing up into the mountains of the Cordillera Darwin and dropping into vast valleys of peat bog and picturesque lakes. Despite the unevenness of the roads, the Discovery was steady and controlled, allowing us to venture where we pleased. We stopped in a tiny, rustic cabin on the shores of Lago Fagnano, a huge lake that straddles the border between Chile and Argentina, and wild camped in places so untouched by tourism that it genuinely felt like we’d arrived at the very ends of the earth.

On the last day, we returned north to the ferry, crossing back onto mainland Chile and being surprised by how smooth the drive was again, now that we were back on paved roads. The prospect of returning to civilization hit us with mixed emotions. The idea of a delicious plate of Chilean steak and a bed in a warm hotel appealed, but leaving the Patagonian wilderness that had been our home for the past five days —where we’d ventured to the very extremes of the Americas — was a sadder prospect. We vowed that someday, sometime in the future, we’d be back again.